How the Mavericks' defense stalled the Spurs in Game 1

Game 1 was unlike any game the Spurs played all season, from an offensive perspective. Rick Carlisle and the Mavericks dictated the Spurs offense and that is why they were able to nearly steal Game 1.

Share All sharing options for: How the Mavericks' defense stalled the Spurs in Game 1

I am still trying to figure out what happened Sunday afternoon. I did not recognize the Spurs offense. San Antonio earned the best record in the NBA by running a motion offense that had the ball moving fluidly from side to side until an open shot was created. Last night, I thought I was watching the Knicks' offense. The ball kept getting stuck, there was no motion and many shots were forced. The Spurs players away from the ball were not moving as they normally do and, as a result, their offensive spacing was terrible. Due to this, the Spurs were unable to create their normal array of assisted, wide-open looks.

In an attempt to make sense of it all I turned to My Synergy Sports. For a small fee, My Synergy provides fantastic data that's linked to video of the plays in question. They also track the number and variety of offensive plays that a team runs so you can see how many times the Spurs ran isolation during the season and how successful those plays were. The data seems to back up what I thought I had witnessed: a different offense.

Now, I know many people are blaming the sluggishness of the Spurs on a simple off shooting night, but I do not think that's the root cause. The bad shooting is a symptom of the Spurs' poor offense. The offense created low-quality looks that the Spurs were unable to convert. Obviously, this is a great shooting team and we've all seen them make difficult shots throughout the regular season, but the shots that were created Sunday afternoon were not as clean as they had been all year.

So, what was different? Check out the numbers below. I gathered regular season numbers from Synergy and compared them to the Spurs' Game 1 statistics so we could identify what changed. 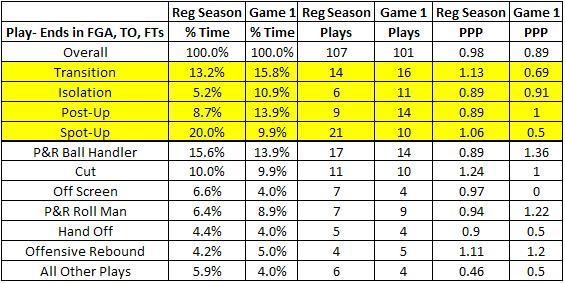 First, let's look at transition plays. The Spurs had a few more transition opportunities in Game 1 than they did in the regular season, but they didn't convert them at their normal rate. Their PPP (points per possession) dropped off a cliff from 1.13 to .69. I think this is the only thing that's solely attributable to poor shooting. The Spurs missed all six of their transition threes Sunday afternoon. Give the Mavericks' defense a little credit for challenging the Spurs' transition threes, but most of these were wide-open shots that just missed. They actually converted four of their seven two-point transition attempts, so it really was the three ball that killed them in transition.

Now, take a look at the Spurs' isolation and post-up plays. To me, these plays are essentially the same thing. Everyone watches one guy try to beat the world, aka the Knicks' offense. These plays are what stood out to me when I was watching the game. The Spurs ran significantly more post-ups and doubled their isolation plays from what they ran during the regular season. These are the plays that get the ball stuck, and I think they are responsible for the Spurs running so few spot-up plays.

During the regular season, aside from transition plays, the Spurs were most successful when finding spot-up opportunities. Spot-ups are the result of the beautiful motion offense we've been enjoying all season. These wide-open shots were not available because the Spurs ran so much isolation. Spot-up opportunities were cut in half and so were their points per possession. After the All-Star break, the Spurs averaged 26 assists per game. In Game 1, they had 14. The Spurs ran a lot of isolations, the ball stopped moving and the great looks that the Spurs feasted on all year were not created, which resulted in the low assist total. If you want to know why the Spurs only scored 90 points, look no further.

Now, why in the world did the Spurs change their offense? It was Rick Carlisle's doing. He had his team switch every screen, which resulted in mismatches galore for the Spurs. Instead of continuing to move the ball from side to side as they had all season, the Spurs couldn't resist isolating the mismatch. Every possession, Tony ended up with a big defender and Kawhi or Tim ended up with a small one, so the ball stopped moving. Carlisle set the trap and the Spurs fell into it.

Carlisle had to gamble. He knew his team wasn't going to beat the Spurs if he allowed San Antonio to play the way they had all season. So he gave the Spurs opportunities that were so inviting that San Antonio couldn't pass them up. He tricked the Spurs into running an offense that they hadn't run all year. He knew Popovich wanted to get Kawhi more opportunities so he rolled out the red carpet and invited him to the Island of Monta. Carlisle gave the Spurs all the mismatches they wanted just to keep them from running the league's best offense.

Interestingly, Popovich also had a plan. Pop had his guys going under every screen for the first three quarters. Devin Harris, Vince Carter and Jose Calderon were making shot after wide-open shot off the pick and roll. Pop spoiled them for three quarters as I pulled my hair out. But once the fourth quarter came around, Pop gave the command to switch everything and the Mavericks couldn't adjust. After three quarters of wide-open looks, what worked for the Mavs throughout the game was taken away and you know the result. Checkmate, Gregg Popovich.

It's possible that I'm overanalyzing this, but it's what I think occurred Sunday afternoon. Rick Carlisle and Gregg Popovich went at it like generals leading troops, and Pop won the battle with his Rope-a-Dope-like strategy. Now that those cards have been exposed, I assume they will not work for a second game in a row. We'll see if Rick has any more tricks up his sleeve for Game 2, but I wouldn't count on them being as impactful. This was a game the Mavericks should have won. A game they had to win.

Since they failed to take it, I think the Spurs are now more likely to sweep the series.