Tony Parker's "off year" is nothing to worry about

While Parker's numbers have dropped after an MVP-level season in 2012-13, he is still scoring at an elite level when the team needs him the most.

Share All sharing options for: Tony Parker's "off year" is nothing to worry about

If there was one cause for concern in the way the Spurs performed in the regular season, it was the play of Tony Parker. The role players responded well all season long. Tim Duncan struggled with his jumper but was still a two-way force. Manu Ginobili had a bounce-back year. Kawhi Leonard started out slow but has played at a superlative level after the All-Star break. The only ingredient that seems to be missing from the championship recipe is the type of MVP-level offensive production Parker provided last season.

Parker famously decided to play for the French national team this past summer, leading them to a historic Eurobasket victory. But as with Manu Ginobili in the past, it seems his decision directly affected the Spurs' ceiling. Parker went from averaging 20.3 points, 7.6 assists and three rebounds in 32.9 minutes a game last season to averages of 16.7, 5.7 and 2.3, respectively, in 29.4 minutes a game this season. Other categories, such as free throw attempts per 36 minutes and true shooting percentage, have also seen a dip. The drop has not been precipitous, but it has been patent, and the Spurs don't seem to have a large margin for error. A less impactful Tony Parker hurts their chances.

But a closer look at the numbers reveals a reason for optimism.

Here are Parker's stats by period, per 36 minutes (click to enlarge):

That's one huge spike we see in the fourth quarter. Parker scores at a level eerily similar to last season's when the game is about to be decided. Of course, he doesn't play as much in the fourth quarter as in other periods, mostly thanks to the fact that the Spurs have destroyed teams and finished games early. A skeptic might suggest that because the Spurs have had so many blowouts, Parker has taken advantage of the team's great play to pad his stats. So here are Tony's splits depending on the result. I'm using totals now (click to enlarge):

Parker has scored the majority of his points when the game is still not decided. The bulk of his scoring has come with the Spurs either trailing or ahead by ten points, at most. This lines up perfectly with anecdotal evidence I'm assuming most observers would agree with: Parker would sometimes look deferential or even aloof for significant portions of the game before turning it on for a stretch to help the Spurs build or expand leads.

There's still room for doubt here. The fact that Parker starts should certainly be taken into consideration; after all, teams start the game tied. Maybe he isn't scoring as much when the game is close and in the fourth quarter. So let's take a look at his clutch stats (the team ahead or behind by five points or fewer in the last five minutes of the game):

Parker scored at a higher rate and at a higher efficiency in close game situations. Here's the shot chart (click to enlarge): 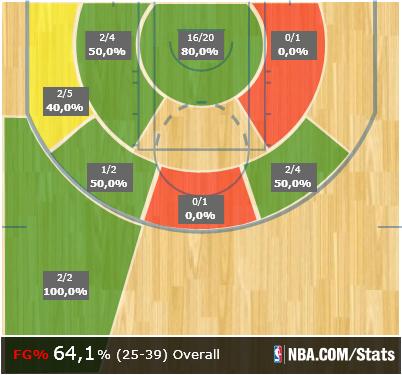 Parker took the scoring responsibility in clutch situations and got to the rim or to the line. He is still an amazing closer, ranking sixth in the league in clutch scoring per minute for players of a similar profile. He played less in the clutch than four of the players ahead of him (James Harden, Kyrie Irving, Kevin Durant and LeBron James) because the Spurs blew out a lot of teams. But in the few opportunities he got, he was as good as the top scorers in the league and played a big part in helping the Spurs finish the regular season with a league-leading winning percentage in the clutch.

Now, does this mean Tony has just been biding his time, taking care of his body before showing his true self in the playoffs? It's hard to say. The numbers don't necessarily support that claim. The significant dip in his free throw shooting percentage in fourth quarters, for example, is worrying and might point to conditioning issues that won't go away easily. And when compared to last season's stellar stats, the impressive numbers Parker has put up this season in the categories evaluated still come up short, especially when it comes to creating for others. I wouldn't go as far as saying the evidence indicates that Parker will surely perform at last season's superlative level once the games start to count.

But I will say that these numbers suggest Parker is still capable of elite scoring when the team needs it. And that is exactly what the Spurs seem to lack compared to other teams: a player they can hand the ball to when nothing else is working and get buckets from in return. When the defenses tighten and the great shots created by the offense simply aren't there, someone will have to create some baskets out of thin air. And Parker has done that this season often and efficiently.

As a team, the Spurs are ready for the postseason. They are deeper and more well-rounded than even last season's team. The few remaining unanswered questions center around the performance of specific players, with Parker's down year at the heart of them. But if his performance in the sparse moments in which the team has truly needed him is any indication, there's nothing to worry about. It looks like 2013-14 Tony is not as far off from 2012-13 Tony as a quick glance to his simple stats would suggest.

All statistics courtesy of NBA.com/Stats