As the West's Irresistible Force met the East's Immovable Object, one thing was clear: Spurs win. As Dr. Brule would say, "Let's check it out." 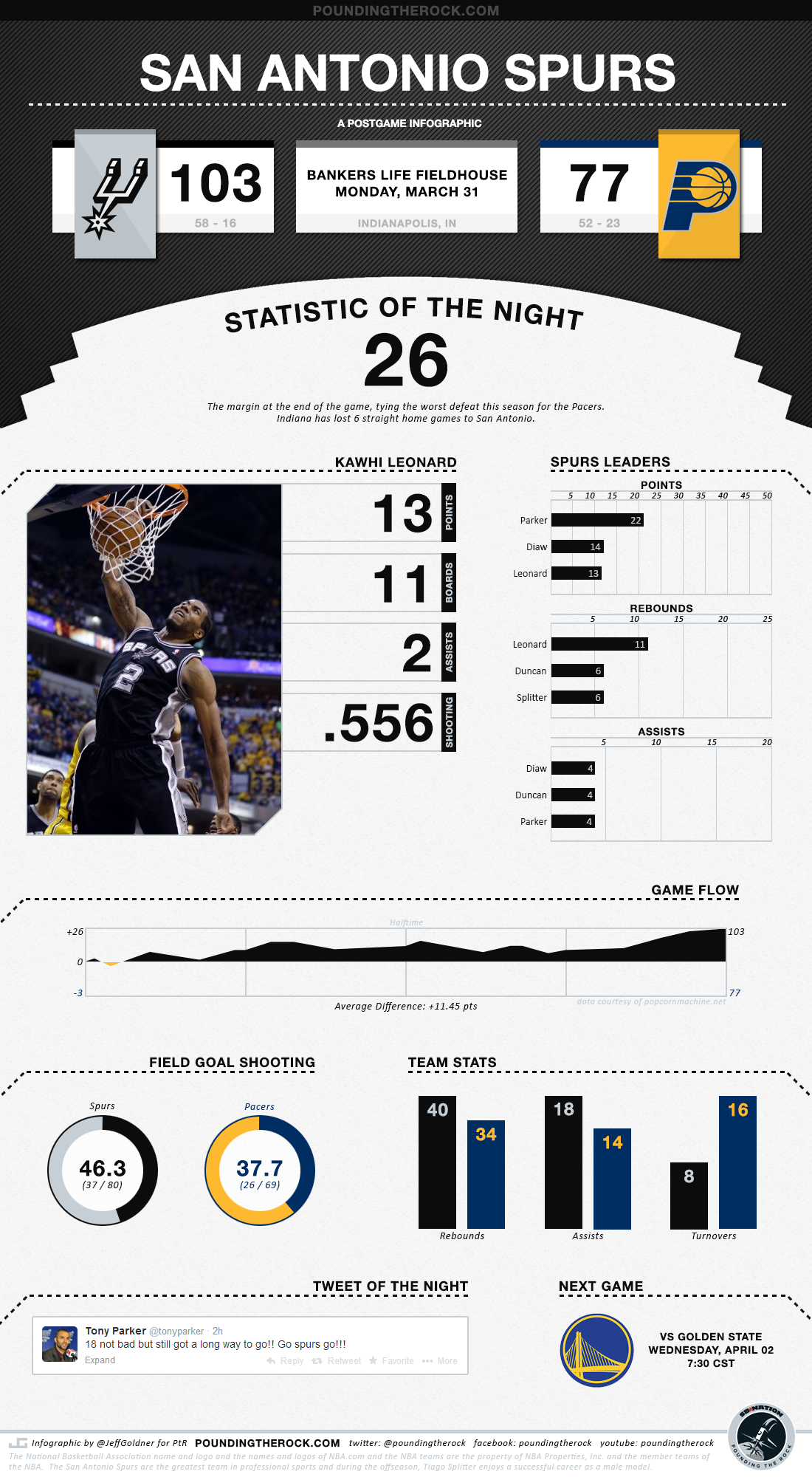 NBA Standings – Still 3.5 games ahead of OKC as the Spurs made it 18 straight. Indiana, on the other hand, finds itself in the 2 slot. No Bueno for them.

Video Interview of Boris Diaw. Boris talks on the streak, "good to great", and the Spurs’ fashion sense. It seems Patty Mills and Marco Belinelli are bringing the average up in San Antonio, in more ways than one.

Indy Cornrows Recap, cites timely shots by Tony Parker and turnovers as part of their problem tonight. [I will go out on a limb and say that they currently have more than two problems.]

Grades are out, and the Spurs are making it easy for Trevor Zickgraf of 48MOH. Not to mention, today’s Grade Book would make ABBA proud. Can I get a "Mamma Mia"?

In a game that touted the best home team vs the best road team, it turned out to be all Spurs.

''Their togetherness really showed, that's where they beat us,'' [Paul] George said. ''That was a team that's all together playing as one, the team that we were to start the year.''

[In that same article] ''It's awful, we've been in a downward spiral and we've been splintering a little bit,'' Roy Hibbert said. ''We've had plenty of players-only meetings and plenty of sit-downs as a team with coaches and we've had some upper management in here, so I don't know. Maybe we should all go to group therapy or something, sit down with Dr. (Chris) Carr and figure out some of our grievances.''

This year, people have been wondering about Timmy retiring. However, what will the Spurs do when Pop hangs it up? Stay within the family or look for an outsider? Forget I brought this up.

Good luck sleeping tonight? I think we have all seen it at this point, but the commentary made me laugh.

Up Next: The Golden State Warriors. According to a Golden State of Mind: Andrew Bogut may not make the Texas Road Trip / David Lee still can’t run. They play the Dallas Mavericks tomorrow night.