A closer look at how the Spurs cooled down LeBron James

Using cohesive team defense and the great defensive talent of Kawhi Leonard, the Spurs did as good a job of shutting down James as any team can hope to

Share All sharing options for: A closer look at how the Spurs cooled down LeBron James

LeBron James scored 18 points, had eight rebounds, seven assists and two steals against the Spurs on Thursday. That's not a bad stat line, even for LeBron. His shot was clearly off, as he missed unguarded looks and went 0-3 from beyond the arc where he averages a decent 37%. He partially blamed the sleeved jerseys for his woes and I can believe that played a part, as most shooters dislike those. His mask was bothering him, so he had to play without it, exposing his ailing nose. And players just have off games. That's all true. What is also true is that the Spurs did a fantastic job on James Thursday night.

How the Spurs turned LeBron into a shooter

That's what every team tries to do. LeBron can hit from outside but you can live with that if it keeps him away from the lane. And outside shots usually have not only a lower percentage but a high variance for most players. So despite James going 8-10 from three a couple of games ago, you take your chances with him taking those shots. 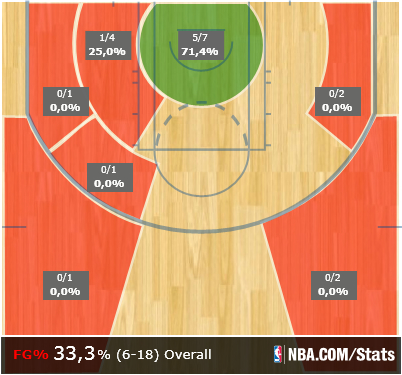 Here are how some of those outside shots looked:

You'll notice those were unguarded shots LeBron missed. The Spurs wanted him to take those shots. They dared him to. Regardless of the outcome, they won as soon as LeBron pulled up.

Of the close shots he made, one was in transition, two were assisted after his man had to help and one was a tip in. In half court sets, Lebron only converted on one drive. He had a botched alley-oop followed by a reverse layup blocked by Duncan and then a drive in which he went right at Splitter, who blocked the shot. Only once could he lower his shoulder and power his way to the lane, where he finished with a runner.

So the Spurs basically turned LeBron into a jump shooter by daring him to shoot and sending help when he tried to drive. It sounds simple enough, but when it comes to James, it rarely is. Yet the Spurs did an impeccable job of it and were fortunate enough LeBron's shot was off.

Cooling down LeBron was a team effort. The Spurs used a strategy that involved a bit of gambling, as a couple of outside makes would have made James' stat line look much better. There was a lot of helping, which resulted in LeBron getting assists. But Kawhi Leonard played a huge part on keeping James in check, especially during two key moments: the beginning and the end of the game.

Miami started out trying to establish James in the post. The idea probably was to get Leonard in foul trouble or get some easy baskets. LeBron has a size advantage over pretty much all the small forwards and even some power forwards. He is certainly bigger than Leonard. So how did Kawhi managed to neutralize a guy that ranks fifth in the league in points per possession scored on post ups?

Obviously, he first tried to deny the ball but the Heat aggressively looked for Lebron.

When James was not close to the basket, Leonard invited him to face up and try to score from mid-range.

When James isolated and tried to back him down, Leonard used his long arms to poke at the ball.

James tried to post up a couple more times, unsuccessfully and then went away from that move for a long time, until he attempted another post up in the third quarter. This is how it went.

Without that weapon to fall back on in half court offense, James was used as a decoy for a big part of the first half or did his damage as a playmaker.

After the Spurs' bench stretched the lead in the third quarter, LeBron started pulling the offense to himself in the fourth as a ball-handler on pick-and-roll sets. But Leonard was extremely smart on how to handle himself in those situations.

The Spurs were trying to send James left, away from the pick and Leonard did a fantastic job of being aware of when the pick was coming and adjusting the angle of his body.

Doing that helped the Spurs deny a quick pick-and-pop and forced LeBron to decide between challenging Duncan at the rim and pulling up on a very cold shooting night. James scored on a pull up from the elbow but also had a charge against Duncan and a turnover after he drove aimlessly into a crowd. After that, the Heat went away from the play.

The two steals in one minute Kawhi had late in the fourth quarter were fantastic and will likely get most of the attention. But the work Leonard did before that, when he single-handedly took away the option to post LeBron up and then helped contain the Heat's pick-and-roll attack were by far his biggest contributions.

No defense really shuts down a player as versatile and talented as LeBron. But the best shot teams have to contain him is force him to do what he struggles with the most. The Spurs' team defense took away the possibility to create close shots for himself in half court settings and Kawhi Leonard took away two of LeBron's best play types. Had the open outside shots fallen, we wouldn't be talking about a bad game from James. Again, no one can really control when a player of LeBron's caliber will have a great shooting night. But the Spurs' defensive game plan was sound and they are fortunate to have such a smart and gifted defender in Kawhi Leonard to help them carry it through.