Why you shouldn't be sold on the buyout market

San Antonio had the opportunity to pad the bench with freshly minted, post-deadline free agents. While a juicy new option is fun to consider, here's why the Spurs should be more focused on what they already have.

Share All sharing options for: Why you shouldn't be sold on the buyout market

The league's annual trade deadline slid by with a whimper, and little of significance took place. The ever-escalating valuation of draft picks handcuffed teams' from swinging for the fences and, a relatively inactive, underwhelming deadline day passed. And now the buyouts are pretty much signed too, with contending rosters being finalized before the league's March 1 playoff deadline for players signing with new teams (after having been waived). Summary: San Antonio didn't sign anyone.

Much noise was made in the so-called "second wave" of free agency as to whether or not the Spurs would capitalize on the perceived chance to bolster their bench.

Ultimately, whether the Spurs landed anyone during buyout season does not matter. Having a veteran such as Caron Butler or Danny Granger might have instilled a little more confidence than the recently-acquired Austin Daye, but it's not enough to rebalance any ledgers.

Historically, this window of player movement is greatly exaggerated -- at least in terms of its importance, and the level of production that one can come to expect from those who switch franchises within it. Here are all of the buyout-esque, late-season additions dating back to 2004 with a brief summary of basic per-game numbers attached (courtesy of HoopsHype). According to this list, ten post-buyout signings were made in the 2010-11 season, and eight were conducted in the following year, 2011-12.* What sort of value did the teams who made these additions get?

It's handy to consider the elementary numbers for these players, and exactly how they performed in their new environments. These figures are heavily weighted towards variables such as role, playing time, and injuries, so it's better to look for other measures. If you factor in the average win shares per 48 minutes for all eighteen players (*with their respective new teams*) in the above-mentioned list, and average it out accordingly, it looks something like this: 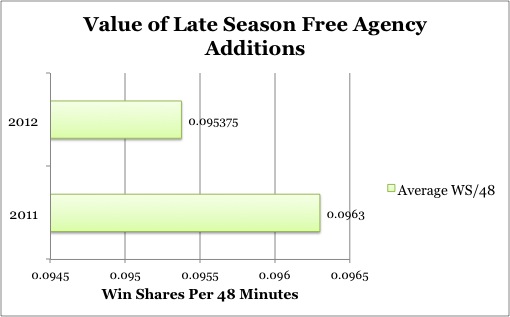 Per Basketball-Reference.com, the league average mark for Win Shares per 48 minutes (estimated number of wins contributed) is approximately .100. Thus, over the span of these two seasons, teams were adding players who had generated a below-league average WS/48.

For every Chris Andersen (who was not actually signed to a post-buyout deal), there are plenty of late season additions in the mould of Troy Murphy. Ideally, the model for buyout acquisitions should be Corey Brewer, who was cast aside at the trade deadline in 2011, and wound up in Dallas after he was bought out by his previous team. While Brewer logged important playoff minutes for the Mavericks, his situation (and his WS/48 of 0.163) stands as more of an outlier than anything else.

For the Spurs, the oft-referred to success story -- with regards to refuelling the team's engine with bought out players -- is the 2012 addition of Boris Diaw. Diaw has blossomed since arriving in the Alamo City and has cushioned himself in as a reliable, rotund member of the frontcourt rotation. Alas, San Antonio's signing of the French forward should still be considered the exception, rather than the rule. 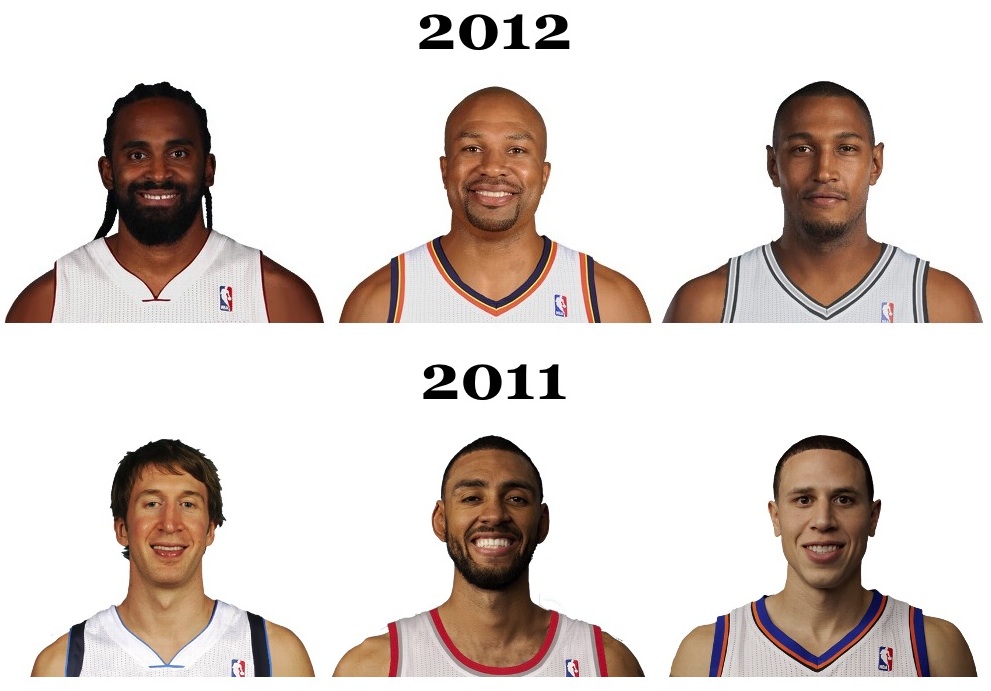 Typically, when it comes to this form of transaction, winning teams are favored in the marketplace. Mismatching parts and seasoned veterans hoping to ride into the sunset with a bonus postseason push weight the post-deadline period toward successful outfits. Given that this is part of the fabric and cachet of the Spurs organization, divert your attention to those scenarios for a moment. Since 2004, some thirty-eight "buyout" players have switched teams, and landed on a playoff-bound roster. Using only seasons where this occurred at least three times, that leaves us with a total sample size of thirty-six players over eight years. With that, the average efficiency of buyout players joining playoff teams is reflected here: 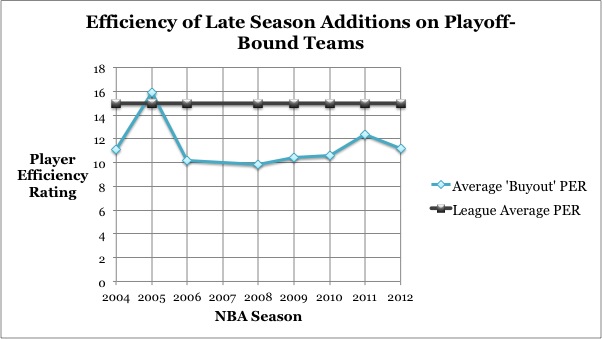 In only one year did the (average) player efficiency available to contending teams leap above the league-wide average of 15.0; 2005, as is indicated (Glenn "Big Dog" Robinson, anyone?). There's a perception that these late season signings deliver a chance to attain that "one last piece," or find additional bench contributions to sure up the rotation heading into the postseason. Unfortunately, the fact remains that P.J. Brown is not available each and every February. The anticipated caliber of player simply isn't there, and the commerce of plucking players in these settings should be viewed akin to that of insurance policies, if anything.

Ben Golliver of SI.com's "The Point Forward" offered this on the subject of the marketplace for bought-out players, and in relation to Danny Granger:

[Yet] the buyout market is a low-cost gamble, particularly when a player like Granger will likely be vying for the veteran minimum. At that paltry sum, a contending team can afford to bring in Granger as a shot in the dark. Maybe a change of scenery will energize him. Perhaps a bit more playing time might right his errant shot. The variables don't matter so much as the result; any help Granger can offer is pure profit, and any minutes he can fill are a boon without basketball cost.

It's a tad too optimistic. The notion that such a move is "without basketball cost" is slightly askew -- whether it's a former All-Star or Malcolm Thomas, everything requires a precious roster spot -- but the overall sentiment serves as a helpful summary of the process. It's all about performance relative to expectation here. If a team is content to take a flier on what's left on the scrap heap beyond the trade deadline and be satisfied with any level of production that results, then that's fine.

Roster spots are scarce, and should be viewed as a currency of their own. Adding a seldom-used Tracy McGrady on the eve of the playoffs is one thing, yet anchoring one's aspirations to fifteen and twenty minute spots from February additions is another idea altogether. Based on the evidence at hand, there's little reason to look for material contributions from any (including Granger) of the relevant names in the months of May and June.

*Note: Too few signings occurred in 2012-13 to make the sample size a worthwhile inclusion.