The Spurs' decision to re-sign Tiago Splitter is paying off

Among the debris of streaks, stable successes, and suspect opinions, one thing remains the same: the unheralded play of Tiago Splitter.

Share All sharing options for: The Spurs' decision to re-sign Tiago Splitter is paying off

"Certain things they should stay the way they are. You ought to be able to stick them in one of those big glass cases and just leave them alone. I know that's impossible, but it's too bad anyway." - Holden Caulfield, The Catcher in the Rye.

It's early July 2013, and a moratorium hovers over the league's day-to-day practices. The 2012-13 season has just reached its climax and, even armed with a 36-19 record across the final five months, San Antonio was narrowly surpassed at the finish line. Before entering a summer of somber self-reflection, the Spurs' organization needed address the state of their cavalry. The words cap space,  present a possible fork in the road in the team's immediate future. There's only one problem: R.C. Buford and the managerial staff are looking at a different map. A fork in the road? For all intents and purposes, this is a one-way street.

On the second day of the month, the front office dismissed the external white noise, and reached a verbal agreement in principle to re-sign Tiago Splitter.

There's an understated beauty to continuity. It, like trust and chemistry, is something that must be developed, and cannot be acquired. R.C. Buford knows this. While a fashionable alternative may have presented itself (hoarding cap space, preserving future flexibility, and beginning to remodel the franchise), this past offseason was one of poetic simplicity.

These Spurs are a carefully crafted ornament, and one that can be restored, but not recreated. So, the front office prefers to offer an occasional coat of rustproofing, ironing out the kinks, and dusting down any minor blemishes. After that, the ornament stays the same -- and it's safely stored away in a glass case.

Retaining Tiago Splitter is only one of many examples of this behavior, and it is a telling aspect of the Spurs' subculture that was addressed by Eric Freeman of Yahoo! Sports immediately after the decision:

This [defensive] ability speaks to another rationale behind the move: that Splitter, who's only ever known San Antonio as an NBA player, allows the Spurs to pick up where they left off this spring next season.

This ability that Freeman refers to shines through in the San Antonio system's fluidity. It's a contributing factor as to why, during this unprecedented 15-game winning streak, the Spurs have been 21.0 points per 100 possessions better off with Splitter on the floor. That's absurd. With the Brazilian on hand, San Antonio has blitzed opponents by a margin that is the best of any starter, and one point per 100 possessions better than the next player on the list (Danny Green). It's a level of defensive diligence, understanding, and execution that won't always be recorded, either.

Splitter, as a testament to his capabilities and versatility, isn't hesitant to push out to the perimeter. Take this possession from the win over the Mavs on March 2, for example: 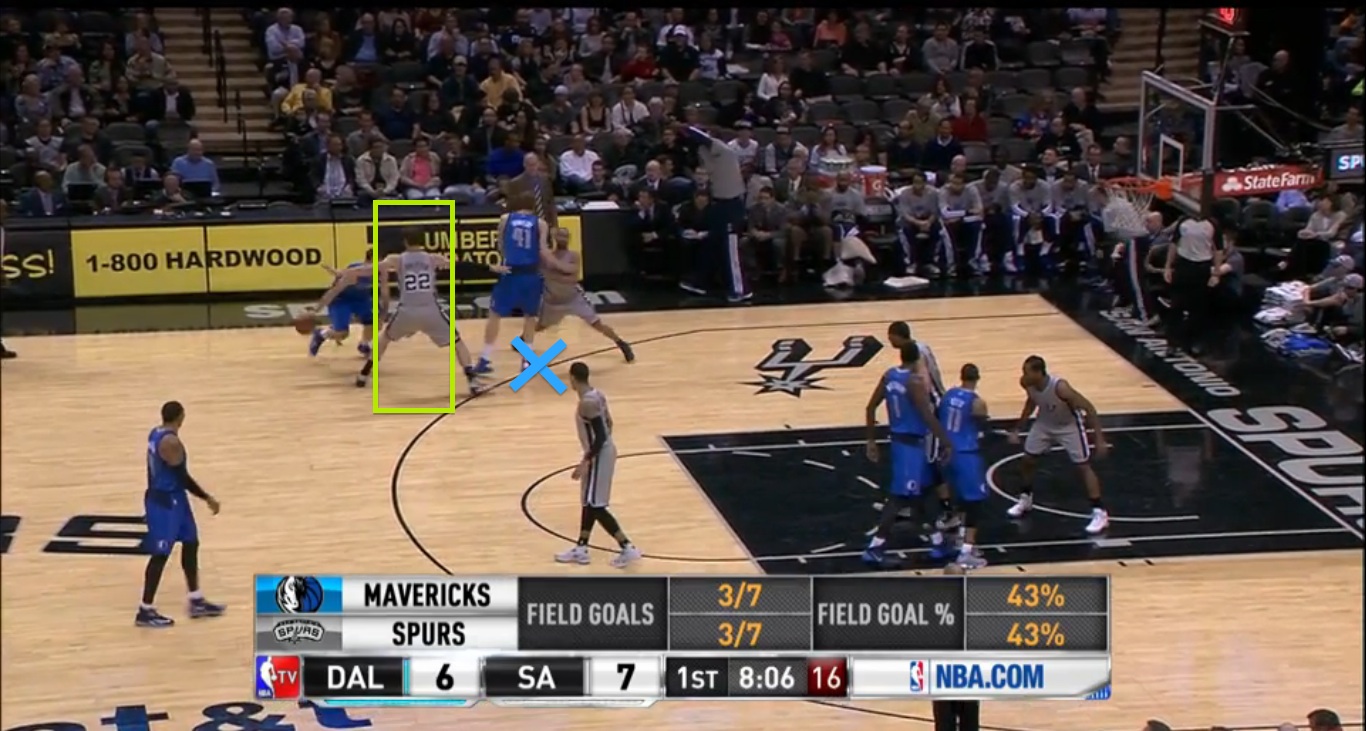 Dallas ran a set play, with Dirk setting a high pick at the 45° angle. After this, he curled off to the right and followed the baseline trajectory. The response? Splitter showed hard on the initial action, obstructing José Calderon (a 45.5% three point shooter) twenty-five feet from the basket. 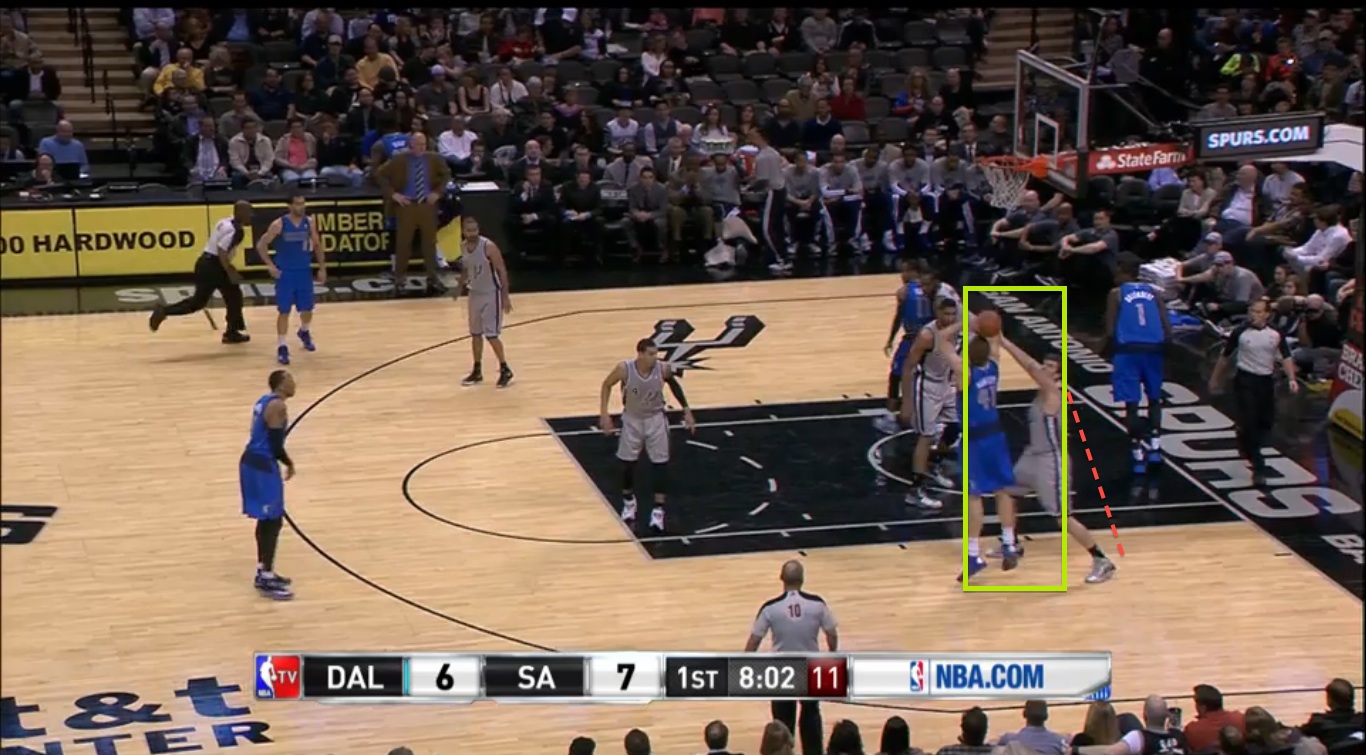 Having motioned beneath the backboard and accepted a baseline screen from Samuel Dalembert, Dirk (momentarily) weaved around about fifteen-feet from the basket. This was a ploy to establish a catch-and-shoot chance off the curl, freeing Dirk for an elementary jumper. Spoiler alert: he missed. Splitter, who withstood the entirety of the set's angles and actions, blanketed the fading Nowitzki.

It's common for Splitter to be seen stretching out and showing on the pick-and-roll, but not a universally applied principle. Rarely is he found misdirected by opponents' sets, or punished for roaming too far from the restricted area. 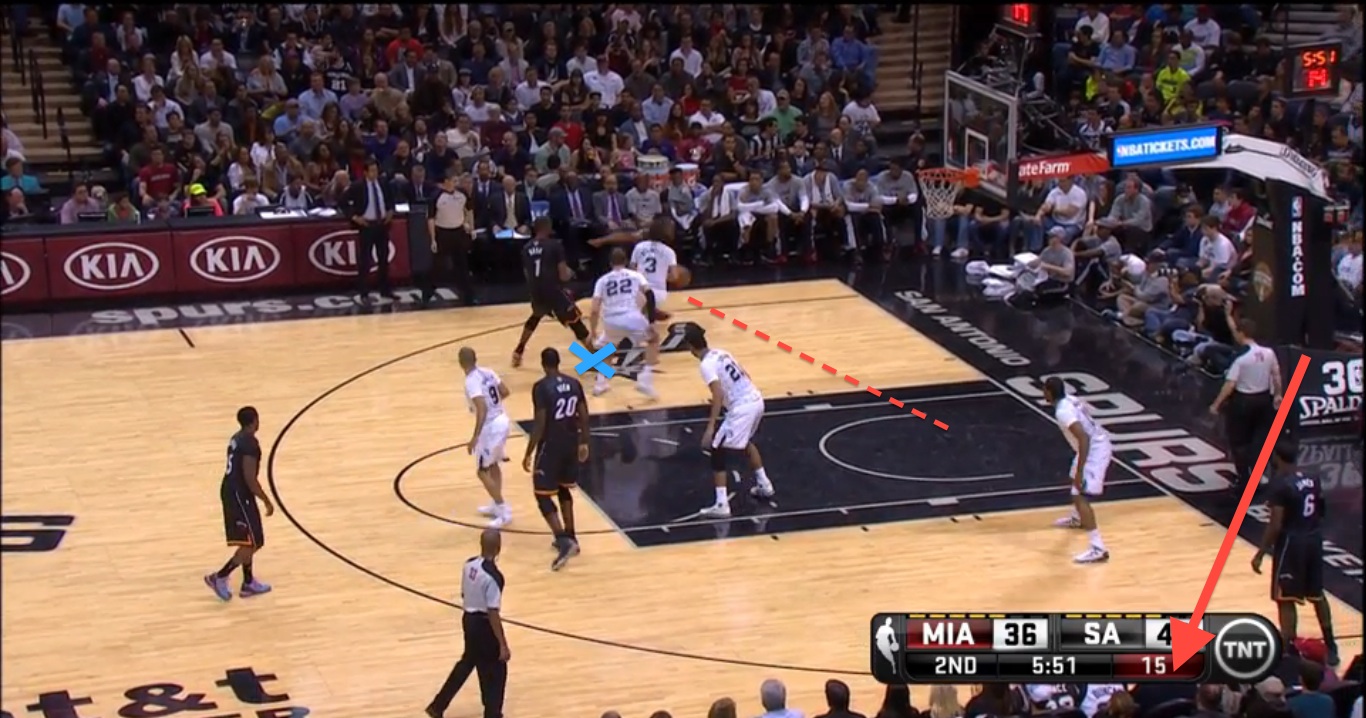 This similar, yet not identical, example of his defensive nous is yanked from the Spurs' rout of Miami on March 6. Here, he half-hedged on the second of two soft screens from Chris Bosh. The possession started with a hollow pick for the ball-handler (Mario Chalmers), before the ball swung to the left wing. Splitter slid into the lane as Wade drove to the rim, and then recovered back onto his man. It resulted in a kick-out to Bosh, and a heavily contested turnaround after a broken isolation play. Note the time on the shot clock in each screen shot. 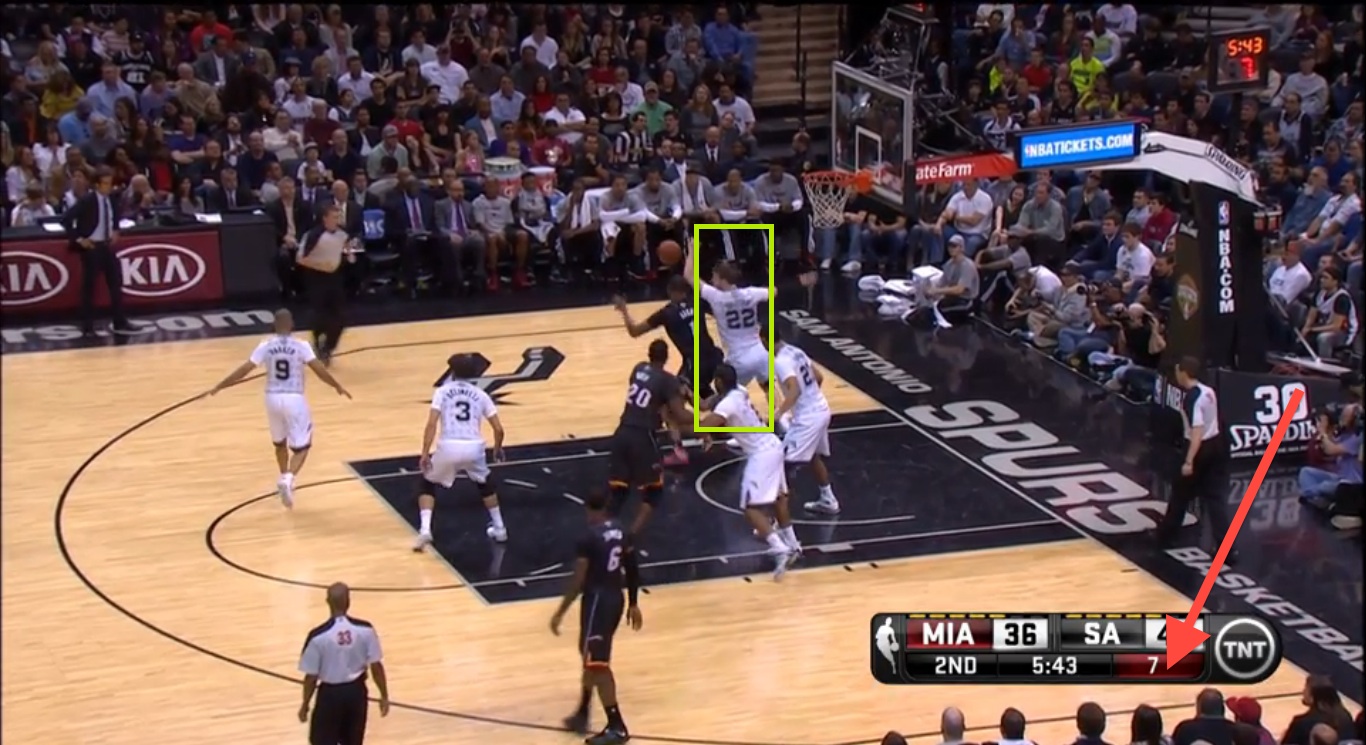 It's easy to pick and choose, and to highlight broken plays and heavily contested possessions, right? These samples are symbolic of so much more. The Brazilian pivot's performance is the outcome of his skill and resourcefulness being given the necessary trust of the coaching staff, and the right amount of liberty within the defensive scheme. Each time Splitter is drawn into a pick-and-roll scenario and the ball-handler is immediately pressured; it's a calculated risk.

Against the Kings in Sacramento last Friday, while guarding DeMarcus Cousins, a different type of setup occurred. 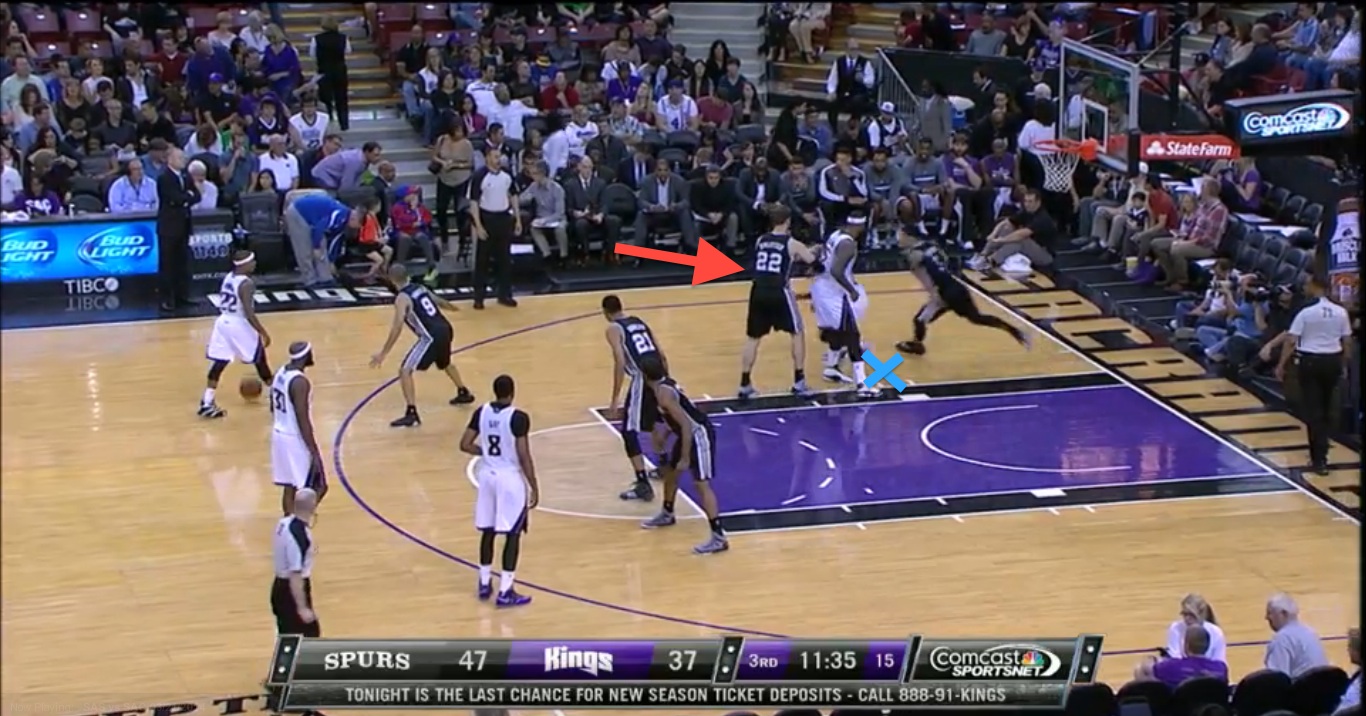 The pin screen shown here is designed to clear a path for McLemore, overloading the opposite side of the floor, and isolating Cousins. Part of the problem with the plan to force the issue and pound Tiago Splitter in the post: Splitter's opponents have shot a lousy 43.2% at the rim this season, per SportVU data. 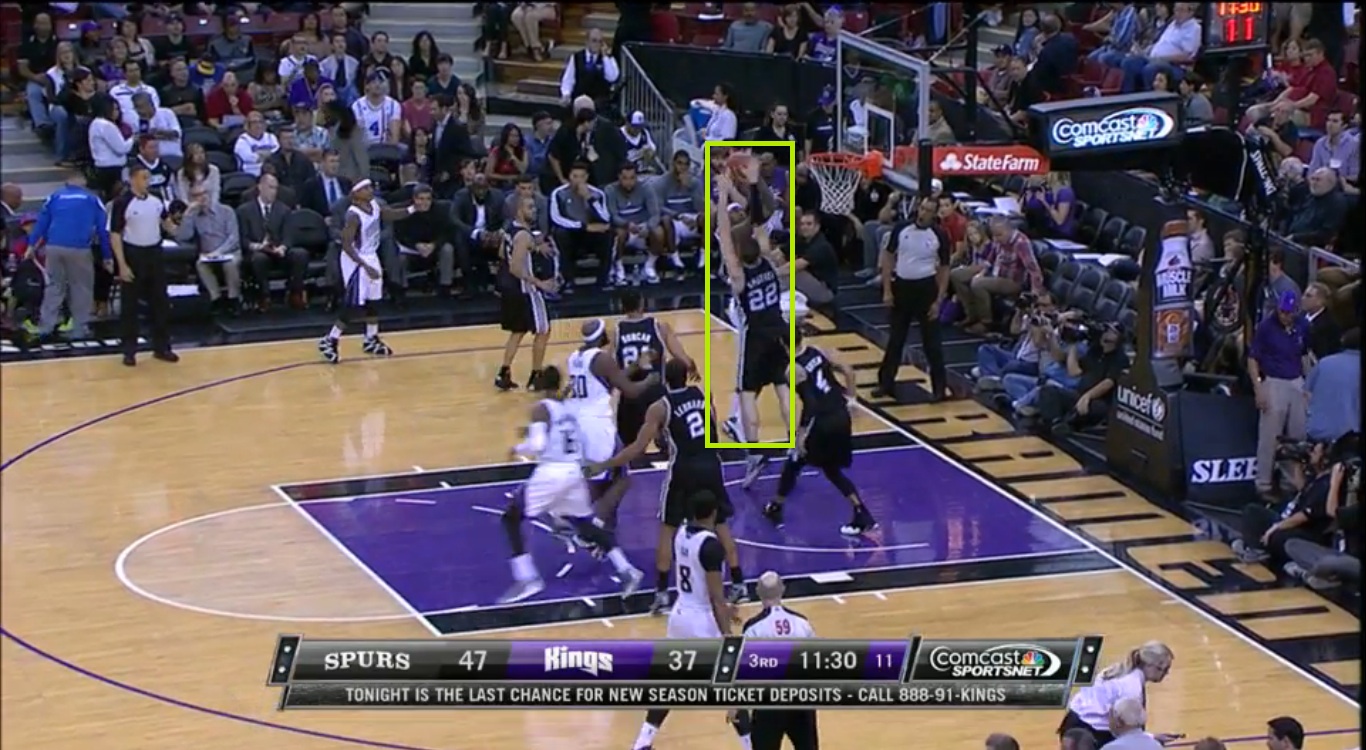 Splitter bodied up Cousins, didn't concede too much real estate, and invoked the Roy Hibbert-esque "verticality" principle with his stance. This is defensive excellence, in the most basic of ways. Equipped to deal with a diverse group of opposing offensive attacks, Splitter and his teammates exhibit the sort of mutual confidence and wherewithal that permits the odd slip up or one possession loss -- provided the mindset behind the play is studiously motivated.

It all mushrooms from there, really. On a whim, you might suggest that Splitter's growth is a direct consequence of being plugged into the Spurs' system. Don't consider the two to be mutually exclusive. There's a harmony to the relationship between each individual player's skill and character, and the team environment, which is the envy of the league.

The above figures don't even do it justice. It's the subtle contests such as these, however, that can tend to get weeded out in player valuations. Splitter was rewarded a hefty ransom for recommitting to San Antonio -- though no more than his constant worth to the team as a whole. When paired with Tim Duncan in this winning stretch, Splitter has stifled opponents' FTA percentage to a lowly 22.0%. A nice indication of the art of avoiding careless fouls.

Although he is championed in this sector of the basketball community, he may never receive his due wider recognition. But that's okay; he is merely one facet of the timeless antique that is this team.

Don't expect Tiago Splitter to win any individual honors, and don't clamor for the day when he is held in the same esteem as the Hibberts, [Marc] Gasols, Noahs, and Boguts of this world.

Sit back; appreciate what's behind the glass.

Statistics utilized are courtesy of NBA.com/stats, unless otherwise noted.