How the Spurs' starters learned how to score again

The Spurs starters are scoring at a much higher rate than early in the season and it didn't take huge adjustments for them to get there.

Share All sharing options for: How the Spurs' starters learned how to score again

This has arguably been the biggest story for the Spurs this year, asides from injuries: after destroying most teams in 2012/13, the starters struggled on offense at the beginning of this season. But as Michael Erler has noted recently, it seems things are finally looking up. Over the last 14 games, the Parker-Green-Leonard-Duncan-Splitter unit has a net rating of 26.2 and has excelled at both ends of the court. That is a huge departure from the days when the bench had to come in to create separation from even some bad teams because the starters kept the score low but couldn't put enough points on the board to pull away.

What was the problem? The easy answer would be spacing issues, but it seems lazy to just leave it at that, so let's take a closer look. Recently Andrew Bergman produced these pretty charts, illustrating the passing dynamics between players in high usage lineups. Here's the one on the Spurs' starting unit: 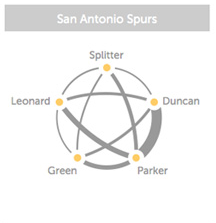 The thickness of the gray lines on the accompanying chart represents the average number of passes per game between two players.

It all revolves around Parker, basically, and the Parker-Duncan relationship. There are very few passes between Splitter, Leonard and Green. So for the Spurs to succeed, the two-man game between Parker and Duncan needs to be humming. And it's not just passes that are important between the two but also assists. Duncan has assisted Parker on 40 of his buckets, almost doubling Manu Ginobili's 22 dimes. And Parker has assisted Duncan a whopping 95 times this season, almost tripling Manu's 34 times. The symbiotic relationship between those two is key.

At the beginning of the season, the team was struggling because Duncan was not only missing from outside on pick-and-pops but also hurting the spacing that allowed Parker to venture into the paint, which limited his drive-and-kick options. As the season wore on and Duncan started to find his shot, Parker started to slow down due to fatigue. With a lot of key cogs missing time with injury, getting any kind of continuity was impossible and the real problems with the starting unit were put on the back burner.

But the problems with the starting unit weren't simply limited to the Duncan-Parker synergy. Unlike those two, Leonard and Parker have more of a one-way relationship. For all of Kawhi's strengths, he doesn't often create shots for others. At the beginning of the season, his poor outside shooting made things harder for Tony Parker and Tim Duncan, who already had all the playmaking burden on their shoulders. So the two main offensive hubs were in disarray, and there was no tertiary creator available to correct the spacing that was completely out of whack.

That completely exposed the lack of shot creation in the games of Danny Green and Tiago Splitter. Despite not being bad passers, those two are almost exclusively finishers. With the defenses keying in on them, they couldn't do their job at the high level they achieved last year. It wasn't really their fault, but any changes to the lineup were going to come through replacing one of them, as the other three players are far more important for the overall performance of the team.

Inserting Belinelli into the starting lineup to provide some shot creation didn't yield great results but having Diaw next to Duncan absolutely did, at least on offense. The problem was that making the change permanent would limit the Spurs' ceiling defensively and potentially harm the fantastic chemistry of the bench while forcing Duncan to exert more effort both on defense and on the boards to make up for Diaw. So Pop chose to mostly stick with Splitter once everyone was healthy and, over the last 14 games, it has worked like a charm.

The starters have scored at what would be a league-leading pace of 110.2 points per 100 possessions in the nine games they have seen the court in the streak. If you prefer just the raw number, they have outscored the opponents by 51 points in 89 minutes and have notched 27 more assists.

So what changed? Two basic things:

The wings are making outside shots

That's the biggest thing, really. The Spurs need the wings to be outside threats for the rest of their offense to truly click. With Green and Leonard going a combined 14-28 from outside while playing with the rest of the starters, the Spurs had the type of spacing they need to offset Duncan's inconsistent outside shot.

The Spurs are pushing the pace

You know how you can prevent the opponent's defense from taking advantage of spacing issues created by having two bigs that can't shoot? Attack before it is settled. The lineup averages 99.6 possessions per 48 minutes during the streak, up from 95.6 before it. Splitter and Duncan are constantly setting staggered drag screens in transition that are crushing inattentive defenders, hurting the opponent's defensive balance and creating easy shots later in the possession.

That's it. Those are the only big changes in performance from earlier in the season: pace and space.

The Duncan-Parker relationship continues to be the most important cog for the unit's success. But even when one of them is struggling and they can't operate at full level, if all the smaller things work, the whole unit will work. As soon as the role players started hitting shots and the bigs started running the floor and setting screens, a problem that loomed large throughout the season figured itself out. Sometimes things are just that simple.

That being said, the fact that the starters are now scoring at a high level doesn't mean the Spurs should revert back to rigid lineup structures. One of the team's biggest strengths is its versatility. Danny Green's injury will force them to change and experiment but they should be willing to adjust when everyone is healthy as well, especially with Diaw in Splitter's place. The good news is that, unlike earlier in the season, those adjustments won't come as a last ditch attempt to fix something that is broken, but instead as a way to exploit a favorable match up.

Update: Green's injury turned out to be minor, so he might not miss any time, reports Jeff McDonald

Danny Green says the MRI on his sore right foot came back negative this morning and he will make the trip to Denver.

Stats courtesy of NBA.com/Stats and nbawowy!

The numbers don't include the game against the Nuggets