The Denver Nuggets are one of those middling Western Conference teams that would be in the playoffs if they were in the East, but who can't hope to catch any of the talent-loaded playoff teams in the west. They have Ty Lawson, one of the quickest point guards in the league, and Timofey Mosgov, who is the second best big man in the NBA named Tim. Kenneth Faried has improved his production after the trade deadline passed with him still on the team. Faried’s defense is still suspect, but he’s a great rebounder and can put anyone on a poster if he gets the ball near the basket. They have the talented French guard Evan Fournier coming off the bench.

Many of the Nuggets’ best players are injured. Jan Vesely was the latest casualty with a rib contusion and he’s expected to be gone for the rest of the season. J.J. Hickson, Danilo Gallinari, Nate Robinson are all out for the season with torn ACLs. Wilson Chandler was injured (left groin strain) for the Thunder game and is listed as day-to-day. The Nuggets only suited up nine players in the 117-96 rout by the Oklahoma City Thunder and the Spurs expect to treat them no better. Denver has lost 10 of their last 13 games against the Spurs and there’s no reason to expect that trend to end. This is the first of two consecutive games between the two teams. The second game is on Friday in Denver. Popovich will probably save some wrinkles for the game in Denver so you might see some weird lineups and strange plays in tonight’s game. You know, typical Pop stuff.

Tuesday was Marco Belinelli’s 28th birthday, and he spent the night out with his brother and several other guests from Italy. If he doesn’t gain a lot of weight, he should be fine for the game. Be sure to wish Marco a Buon Compleanno if you see him at the game.

Matt Bonner is out with a calf strain for about two weeks, which means that Austin Daye will be active for the game. He was great against the 76ers and Pop may be be tempted to see how well he can play against a team that has a more normal NBA level of talent. It’s pretty much impossible to predict who Popovich will play, but with 12 games left in the season, it’s too late in the season to develop players, and too early to solidify the Spurs' playoff rotations. If Daye plays, expect more Daye-time and a continued stream of Daye puns.

What did the spurs use to keep the Sixers from feeling so bad about their losing streak (without the drowsiness)?
DayeQuil--The Dayetime, Non-Duncan, Congested lane-Blocked Shot, Open Three, Stuff the ball, Kaching, Relief So-You-Can-Get-Through-The-Game Medicine. 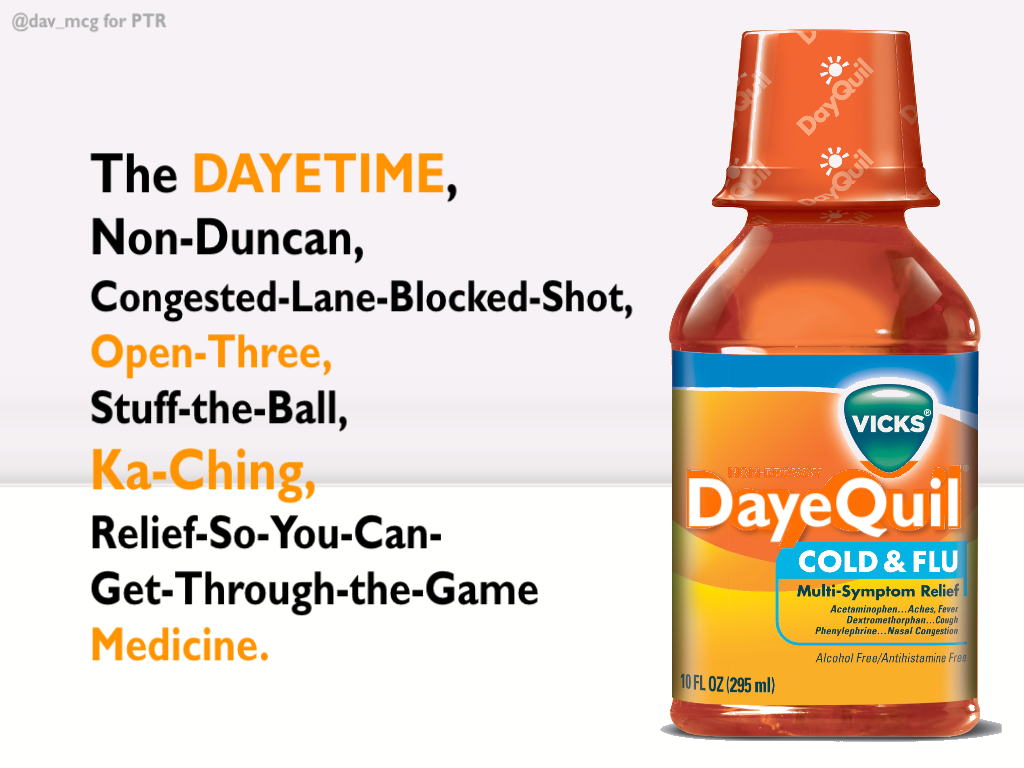 But remember, if the effect lasts more than one quarter, consult a coaching professional.

Somedaye the daye will come when we tire of the Daye puns, but not todaye!

Nuggets perspective can be found at Denver Stiffs.