An open letter to Kawhi Leonard

Much has been made of the fact that the Spurs haven't lost since Kawhi returned to the lineup, but what does an analysis of the Spurs' lineup data reveal? Enough to show why everyone should love the NBA’s quietest rising star.

Share All sharing options for: An open letter to Kawhi Leonard

The first time I ever watched you play was opening night, Spurs vs Grizzlies, during the shortened 2011-2012 NBA season. It was your first regular season NBA game and I just happened to be in the lovely city of San Antonio. You had a pretty good game and it was clear that you were athletically gifted. But what I remember most was the spark that you brought to a team that I thought was done. Fast forward two seasons and the Spurs are coming off of a season in which they narrowly lost the NBA Finals, and they currently sport the best record in the league.

I am not saying that you single-handedly transformed the Spurs from an aging team that was upset in the first round of the playoffs into the today's team, but I am interested in quantifying how much value you have added. And since the word on the street is that you are a quiet, humble guy, I feel certain you won't mind letting me do the bragging for you.

You've had a particularly good March after coming back from injury, but I did a holistic analysis of the entire season. In order to do so, I scraped all of San Antonio's lineup data, then sliced and diced it until I found something interesting. I first looked at the standard volume-focused box score stats, normalized per 100 possessions:

A few things stick out. The first is points. While your defensive contributions are clear -- your lineups allow 3 points less per 100 possessions -- it's interesting that they also generate 3 fewer points. Setting up your teammates isn't really a strength, as you only account for 9.3% of the Spurs' assists when you play. That's okay because you have the privilege of playing with a great point guard, which we'll get into deeper later on, but let's look at the positives. Lineups with you in them grab 8% more defensive rebounds, lowering the number of offensive boards grabbed by the opponent.

Now, let's look at the more shooting-centric stats to get a sense for efficiency and shot selection (again, these numbers are per 100 possessions):

I want to point out that the Spurs play a fundamentally different style of basketball when you are on the court. In fact, they attempt 34% more 3s and allow 21% more free throw attempts without you, but lineups without you are no better at shooting the three. It's clear that Pop runs a different kind of offense with you in the game, which explains the team's higher offensive rating while you rest. And the increase in opponents free throws without you is a symptom of missing your strong defense.

So this is all worth something, but it doesn't highlight your true contributions to the Spurs. The issue with analyzing data alone is the assumption that basketball is a closed system. It doesn't take into account the fact that basketball is a team sport. (This is my biggest qualm with the +/- rating, which I did a three-part feature on earlier this season.) Coaches like Pop design lineups to maximize the overall productivity of their five guys on the court. Since basketball is not a controlled experiment, when you compare a lineup with you to one without you, the delta between the two lineups doesn't quite give you a measure of overall contribution.

For some context, here is the breakdown of the teammates you play with, in terms of minutes. (Please note that this will not add up to 100% since basketball is a 5-man game): 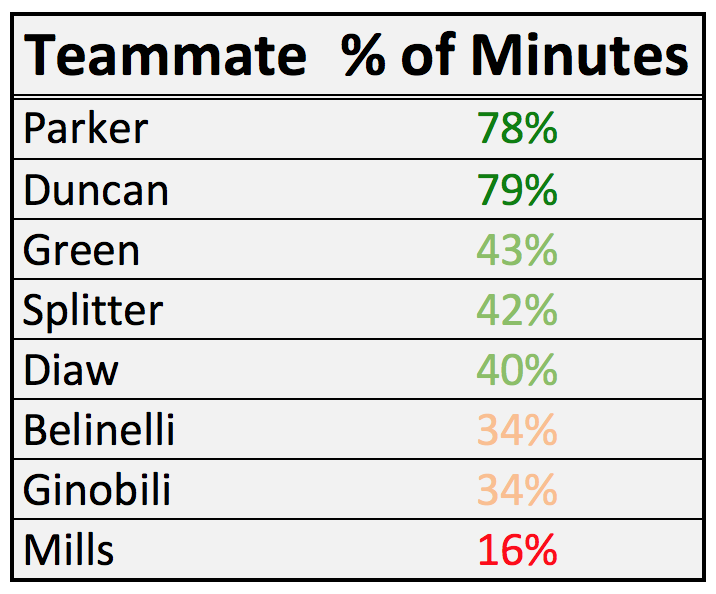 It is not a surprise to anyone that you play a lot of minutes with Tony Parker and Tim Duncan, but the 35% plunge to Danny Green is eye-opening to say the least -- and Patty could sure use some love. That said, let's see how Parker and Duncan fare without you. Take a look at the numbers yourself:

This table paints a picture of what you do on the court. The Spurs outscore teams by 6 points per 100 possessions with you, versus just 3 points without. You help them force misses 3.4% more often than when you sit. And while San Antonio's threes fall less frequently with you (by nearly 6%) your lineups allow 1.5 fewer opposition three point attempts.

In a system as team-oriented as Pop's, no single player will be absolutely killing it in these kinds of stats. That's why I haven't prioritized any of your individual accomplishments, and it's why I'm ignoring San Antonio's record with and without you in the lineup -- every Spurs victory is truly a team win.

The bottom line is that you make the Spurs a better team, starting at the foundation. The Spurs that I grew up with were defensive juggernauts, and it is encouraging for me to see how much you influence the team's defensive rating on the court. What these numbers fail to capture is how difficult a lot of your assignments have been (LeBron James and Kevin Durant come to mind). I am willing to take the hit on points scored in the short term and watch Pop continue to build a team around you.

So here's to your continued growth and development as part of the San Antonio Spurs system.

Yours in basketball,
Swetha Prabhakar

P.S. I will be watching from the stands in Oracle Arena on Saturday night.