No Quarter From Old Men

"I waited for him to smile but he didn't. I said well, that's pretty cold. And he said it was no colder than what the facts called for. So that was all there was about that.” -Cormac McCarthy

Share All sharing options for: No Quarter From Old Men

It is incumbent on those of us who write to continually create new ways to tell you the same story. Those that do it best lead fairy-tale lives as their thrilling novels fly off the shelves and their bank accounts swell with pride and cash.

Those that do it well work a beat somewhere and nightly stare down ominous deadlines without so much as blinking. Force of will and fueled by caffeine they deliver their articles on time so that thousands of happy readers can flock to their page to drink it all in.

Then there are those that do it like me.

Those that will attempt to explain the icy precision of the San Antonio Spurs by comparing them to Anton Chigurh, the villain in Cormac McCarthy's masterpiece, No Country For Old Men.

Chigurh is profiled here by empireonline.com: 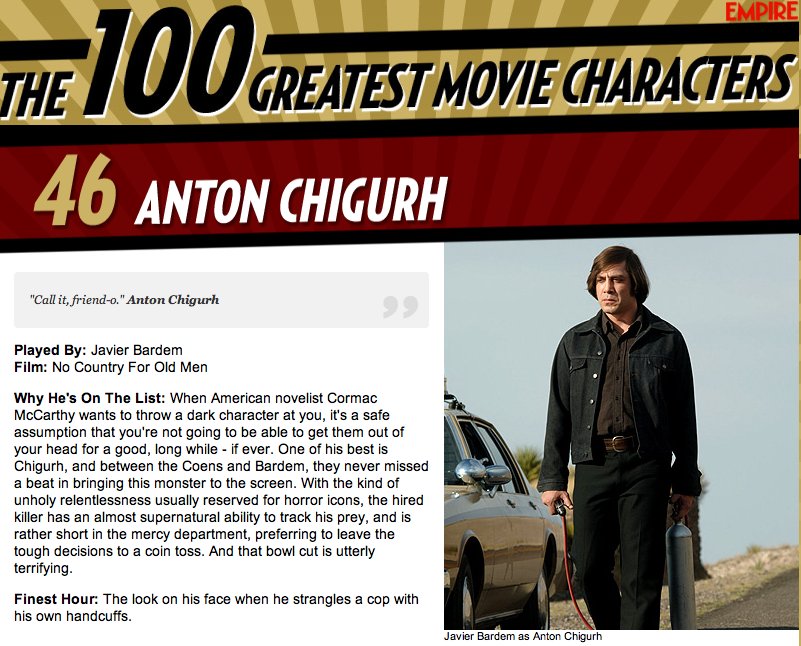 Now this isn't to suggest the Spurs are comprised of men proficient with captive bolts that can stitch their own wounds after robbing a pharmacy. But the similarity lies in the single-minded pursuit that Chigurh has in completing his task, regardless of obstacle or circumstance. The parallel between Chigurh and the Spurs is the complete indifference each feels for anyone standing in the way of their ultimate goal.

Since the Spurs returned to full strength on February 26th there has been a coldness in their demeanor.  They give their opponents no quarter, while at the same time not belittling them for stepping into the arena. The names on the front of their opponent's jersey are of no consequence.  Heat, Lakers, Jazz or Magic, your identity is not important here.  You're not an enemy, only the next stop along the way in this ride through the chilly night.

"They pretend to themselves that they are in control of events where perhaps they are not. And it is always one's stance upon uncertain ground that invites the attention of one's enemies. Or discourages it...

I have no enemies. I don't permit such a thing."

It's a realization we must face, but this team's fiercest antagonist  for the remainder of this season and into the immediate future is time, in two ways: the precious time that the core group has left and the ravages of time that will soon force the end for Tim Duncan and Manu Ginobili.

Perhaps that's why this current win streak and powerful display of indifferent excellence is so palpable. Gregg Popovich has been even more terse in his recent press conferences, icily staring down the local press with whom he's often at least somewhat accommodating.

Tim Duncan will still sneak in a few playful jabs with his teammates when the cameras aren't on, but even he seems more stoic.

Early in the season Manu Ginobili was often accessible, even playful with some of the fans lucky enough to be court side before the game. Now he doesn't seem to notice the kids and mothers shouting his name as he stretches and shoots.

Tony Parker rarely shows much emotion, but his in-game conversations with Pop are growing more lengthy and intense. I recently heard Tony explaining to Pop why he had changed the called offensive play during a time-out. "Pop, they're so long, I just can't get a pass inside," Tony explained with his nervous smile. Pop considered the rationalization for a few seconds and nodded. Perhaps not in agreement, but at least in affirmation.

Kawhi Leonard is even more Kawhi than before.

This team knows exactly who they are and what they can accomplish if they continue to do their job with cold, steely precision like Anton Chigurh. It will take some luck and they will somehow have to keep time from the door, but they know what they can do. They know where they can go.

That indifference, that coldness, that robotic persona void of emotion might just make the difference in whether or not these old men can continue to show no quarter and bring home another trophy.

You can bet a handful of contenders in the league are having dreams. They're dreaming about a journey, out in the cold night where up ahead the fire has been lit and is there ready to welcome them.

And then they'll wake up.