The red-hot San Antonio Spurs continued to play at an elite level as they comfortably beat the Utah Jazz, 122-104.

Sunday night, the Utah Jazz visited San Antonio to play the streaking Spurs. The Jazz came into the game having lost eight of their last nine contests while the Spurs were looking to win their tenth in a row. Although the Jazz played well, the game was controlled by the Spurs as they used their beautiful offense to cruise to a comfortable victory, 122-104. 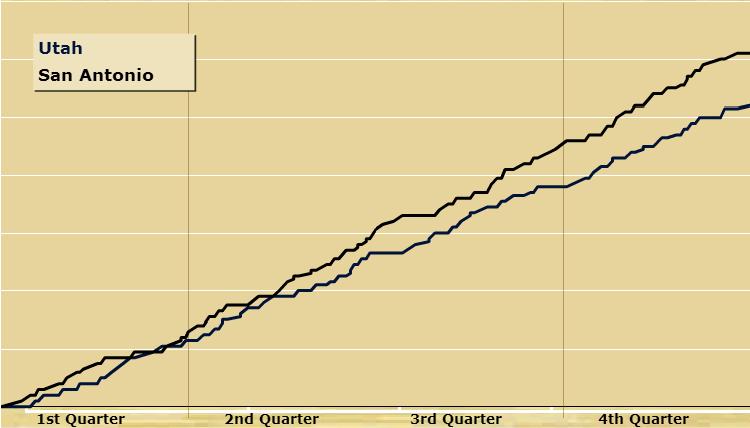 As you can tell from the game flow, the Jazz trailed for nearly the entire game and as the game moved along, the Spurs steadily increased their lead. In the first half, the Spurs seemed content to have a shoot-out with the young Jazz. Neither team really defended at all early on and as a result, the Spurs shot 61% from the field and Utah shot 52% in the first half. Utah's offensive rebounding allowed them to stay in the game even though San Antonio was shooting at such an elite level. At intermission, the Spurs led by eight points, 61-53.

The game was greatly decided in the third quarter when the Spurs finally decided to play a little defense. The Spurs began the third with a 5-0 run and finished it with a 9-3 run. In the quarter, the Spurs held the Jazz to 35% field goal shooting and just 25% from distance. While the Spurs' defense stiffened, their offense continued to excel. The Spurs shot 68% from the field and won the quarter 30-23, to take a 15 point lead into the fourth quarter.

11 points is as close as the Jazz would get in the fourth quarter as the Spurs cruised to win their tenth game in a row. OKC lost tonight to the Dallas Mavericks so the Spurs extended their grasp on the West's best record to two games. Every year, I convince myself that home-court doesn't matter and every year, it seems as if home-court really does matter. It would be so nice if the Spurs could retain the best record in the league and have home-court advantage throughout the playoffs.

It just demonstrates how elite this Spurs team is that they can suffer through so many injuries throughout the season yet still have a shot at the league's best record. In addition to the injuries, Popovich has been carefully keeping everyone's minutes low all season. The Spurs have a great shot at finishing with the league's best record and it was never their priority to do so. The Spurs are just that good. It looks like the Spurs are going to accidentally win home-court advantage.