Rehash: The Road Not Taken

Share All sharing options for: Rehash: The Road Not Taken

From Robert Frost's famous poem The Road Not Taken:

I shall be telling this with a sigh
Somewhere ages and ages hence:
Two roads diverged in a wood, and I-
I took the one less traveled by,
And that has made all the difference.

The Spurs and Lakers are both proud, accomplished organizations, but they couldn't be further apart in philosophies. The Lakers burn hot, continually pushing all their chips to the center of the table in search of the holy grail. Regardless of what one thinks of Kobe Bryant personally, he's one of the all-time greats. If Michael Jordan had given up basketball after being cut from his 8th grade team, many people would be peddling Kobe as the best ever and his accomplishments would be the stuff of legend, rather than being continuously compared to the legend.

But when you live by the sword, you die by the sword. While Kobe (and Phil Jackson) led the Lakers to five NBA titles in the last 15 years, Kobe is also responsible for the years of struggle.

The Lakers -- and Lakers fans -- are a bipolar bunch, suffering through the lows in hopes of one more high. The 2013-2014 Lakers are certainly at a low point and will post their 6th disappointing, if not outright deflating, season over that same 15year span. 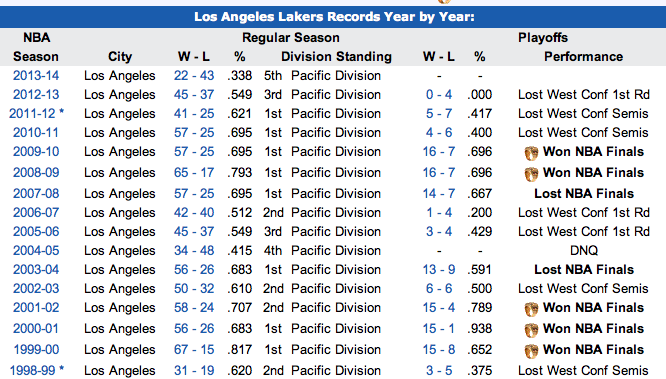 The Spurs on the other hand have taken the road less traveled. The organization doesn't go for the big splash, and often shuns the spotlight. Tim Duncan is the greatest power forward to ever play the game but he'd never demand a two-year, $50 million contract because he knows (as does the organization) that doing so would severely hamstring the team for years to come.

The Spurs take the slow and steady approach. Pop's squads haven't posted any 67-win seasons, but they've never posted a 34-win (or worse) season either. The Spurs assemble a group of guys that play as a team with the ultimate goal of a grand crescendo in June. Sure it doesn't always work, but for the past 15 years the possibility has always been there. In the Duncan era the Spurs have never been out of it in December, while the Lakers have been on several occasions.

It's a tale of two paths, and which one to take. The Lakers will be picking up the pieces for years to come, while the Spurs just might have the pieces in place to make another run. 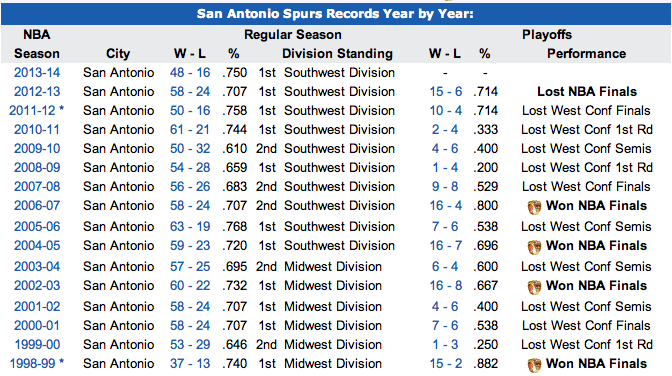 The atmosphere tonight was strange. Gregg Popovich was abnormally surly in his pre-game presser and probably made a few reporters consider a new career path. No doubt there were thoughts of the road not taken and the pursuit of something easier as Pop glared at us and gave terse explanations as to why he'd never deign to answer such gibberish.

Outside of the media room though the feeling was euphoric. Everyone seemed to be in a good mood. Perhaps the victory over the Heat eight days ago really changed the attitude in this city. Or maybe it was just because it's Friday and Fiesta is in sight, but whatever the reason, palpable joy was in the air and obvious to anyone paying attention.

Make sure to read J. Gomez's excellent recap on the record-breaking night for the Spurs and game highlights, but I refuse to classify this as a game. It was a group of nameless, faceless men dressed in purple that traveled to San Antonio to take their beating and collect a check. At the 7:33 mark of the first quarter the Spurs trailed 7-5. Over the next 44 minutes the Spurs outscored the Lakers 112-80, and it wasn't even as close as the final score would indicate.

I took the one less traveled by,

and that has made all the difference.

"Being a coach is a pain in the ass."

-Pop, and the nicest thing he had to say before the game

Spur of the Moment:

The Red Mamba was obviously disappointed that the Black Mamba didn't travel to San Antonio to pick up his custom made T-shirt, so he made the Lakers pay with a double double.

Matt Bonner had a double-double and the Lakers players got paid. 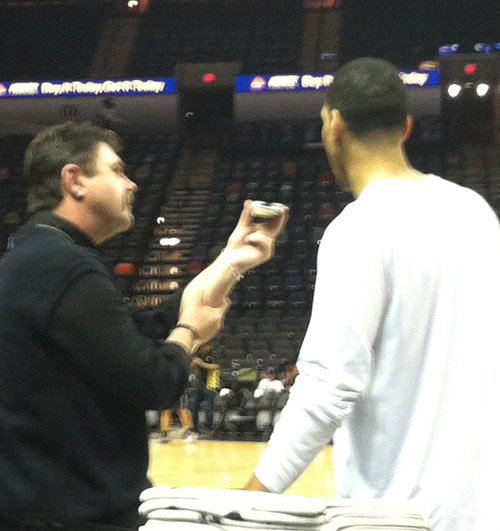 Backstory: I was watching the FoxSports Southwest pre-game show last week and they were doing a profile of Bill Schoening and showed a few pictures of him conducting interviews. One picture of him interviewing Belinelli looked really familiar so I looked it up, and yes it was mine. Which is proof that PtR is dominant.

Lakers with more FGA than points.

Duncan: "We're feeling pretty good. We're healthy and hopefully we can stay that way. If that be the case, we love our chances."

Glad I fell asleep and didn't have to watch the Clippers blow out the Lakers last night.

Outstanding hanging out with my boy @IAmSteveHarvey who has the #1 radio show & the best game show host in history as host of Family Feud!

i wonder, if the Spurs had feeling, if they would enjoy this.

I can't return everybody's calls and texts but please know that they are greatly appreciated. Thank you so much!

The difference in the two is evident even on Twitter. One side does their job, reporting on the destruction. The other side is Magic Johnson.

Here's to (Raise your glass) 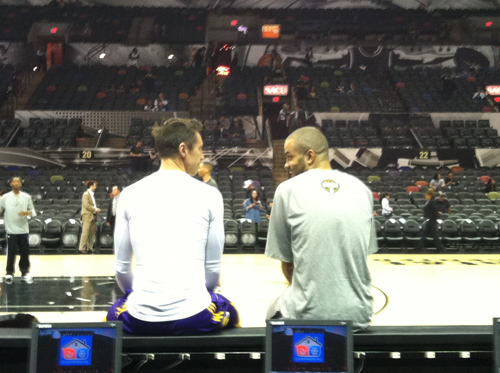