In praise of Patty Mills

In his third season with the Spurs, Patty Mills has earned the right to be a valued rotation player on a contending team.

Share All sharing options for: In praise of Patty Mills

The life of an NBA reserve is often bumpy and, at times, has the tendency to ebb and flow in concert with the streakiness of a scoring punch. Minutes, touches, and reputations can comfortably fluctuate, and there is typically little room for forgiveness. Thankfully for the Spurs' "tweener," backcourt bench contributor, Patty Mills, the 2013-14 season has presented no such pressing concerns.

Cloaked deftly beneath San Antonio's devastating stretch of injuries, Mills' play has excelled beyond any reasonable expectations (particularly in the past month), and his importance to the team's successes has continued to subtly and steadily rise. Acting in the role of an undersized, hybrid guard with a "shoot-first" mentality -- far from a highly-sought after player mould -- is an unenviable spot to be in, yet the lively Australian has given the Spurs staff no choice but to trust his active, scorching-hot hands.

The month of January threw all kinds of curve balls in the Spurs' direction, and the team battled through the health problems to register an uncharacteristic 8-6 record. That the team was able to escape the injury minefield (there were a combined total of 7 appearances from Danny Green and Tiago Splitter in January) with an above-.500 mark is a testament to the supporting cast, of which Patty Mills is now firmly an integral part. At 17.0, Mills' PER is easily the highest of any figure he's recorded (with a min. of at least 40 regular season games played) over his relatively brief career.

His use of possessions in the offense is controlled, and his conversion of 50.0% on two-point field-goal attempts is very healthy for a smaller guard who only sources 22.1% of his overall attempts from within fourteen feet of the basket, per NBA.com/stats. Perhaps even more impressive than the former Saint Mary's Gael's accuracy from within the arc is his perimeter proficiency -- Mills ranked third in the NBA in January for his three-point shooting (min. 2.0 attempts per game), netting a crazy 49.1% of his deep launches. That's a blistering outside shooting mark, and it's illustrative of the growing trend that has underpinned Mills' developing offensive arsenal. A quick scan over the basic numbers highlights just how efficient the pesky point guard has been from that region of the floor.

Below is a depiction of Mills' perimeter results from the past four seasons, relative to the rest of the league (data courtesy of Basketball-Reference.com): 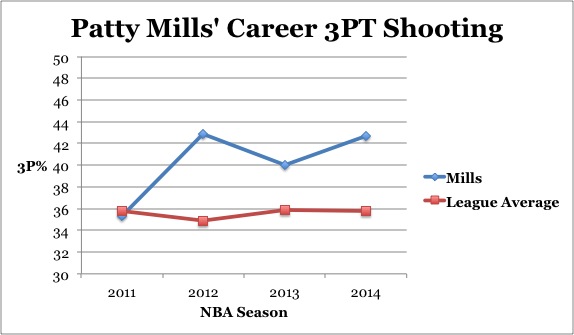 To Spurs fans, it may seem like a given that the team's bench spark plug has been able to consistently drill his outside opportunities, however, it wasn't so long ago that the league's lockout and falling out of favor in Portland left Mills to be plying his trade with the Melbourne Tigers in the Australian domestic competition. Thanks in part to the then-Brett Brown connection, the Spurs were able to pluck Mills from the Asian basketball scene (following a pit stop in the Chinese Basketball Association), making the 6'0" shooter the second Australian player to make the transition from Melbourne to San Antonio (with Andrew Gaze being the first in 1999).

In March 2012 (when he joined the team), the maneuver had the aura of an administrative move to pad out the end of the bench, and bring in a youthful, ambitious insurance policy prior to the playoffs. The past two seasons have emphasized just how important his addition to the team has proven.

Generally speaking, Mills has been relied upon for his point production, with Manu Ginobili and Marco Belinelli embracing more of the reserve playmaking and facilitating duties. When paired with that guard duo, the Australian has formed part of a three-man unit that has outscored opponents by an average of 25.4 points per 100 possessions. A major factor in the Silver and Black being able to eviscerate opposition bench units has been Mills' understated, continued defensive growth. His defensive efficiency rating has sharpened to 96.9 points per 100 possessions -- something that's best appreciated within the context of those who have been competing for his playing time.

Take a moment to digest the following figure, which illustrates the defensive measures of a host of backcourt bench contributors for San Antonio in recent seasons, per NBA.com/stats (note: Gary Neal has played the 2014 season with the Milwaukee Bucks): 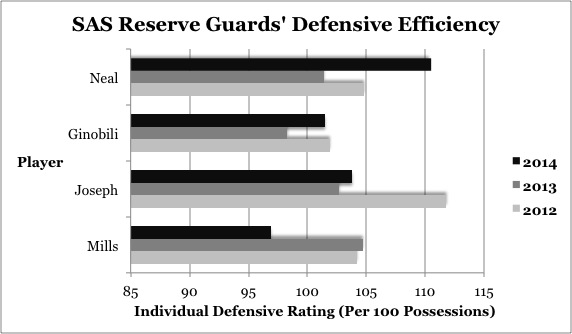 Clearly, what Patty Mills has offered on the defensive end in 2014 considerably outweighs anything that the Spurs have received from their reserve guards in recent years. The energetic guard's steals percentage and steals per 36 minutes have incrementally spiked without his propensity to commit personal fouls suffering (averaging 3.1 per 36 mins), either. It would be clichéd and not overly accurate to contend that Mills is enjoying a "breakout" season with the Spurs, particularly for a player averaging only 17 minutes per game, but that's not to dismiss his comprehensive, across-the-board individual improvement.

It probably seems too simple to adorn Tony Parker's backup with a blanket label such as "improvement," and that's why it is more appropriate to see how his play fits into players of his size/positional bracket in relative terms. To recap, Mills is carrying a True Shooting percentage of 58.9%, is averaging fewer than 10 turnovers per 100 possessions used, and has a PER of 17. Here is the list of NBA players 6'3" or shorter who have managed what the speedy menace is on pace to achieve over the league's last ten seasons, sorted by Win Shares:

It's exclusive company, and it truly helps to cushion his performance with a dose of perspective. Make no mistake, Mills' ascension has been anything but a sudden statistical surge (or an anomaly, for that matter). His incremental growth shows his commitment to his craft, and should be a model for aspiring players on the fringe of the league. No number of inherent disadvantages -- international player, 55th pick in the draft, initially regarded as terribly undersized and a minus-defender, failing to stick with his first NBA team, spending time in Australia and China -- have derailed the progression of his career.

With Ginobili hamstrung on the sidelines for the foreseeable future, concerns about Cory Joseph's productivity, Gary Neal off grumbling somewhere in Wisconsin, and Nando de Colo being Nando de Colo, it's difficult to assemble a logical argument against Mills receiving a modest boost in court time. At age twenty-five, five years into his NBA life and having led his national team at two Olympic tournaments and in the 2010 FIBA World Championship, it's time for Patty Mills to be rewarded with further meaningful and consistent opportunities.