The Spurs won the first game of the Rodeo Road Trip, despite being down by 14 early in the fourth. Let's have a look at some of the plays that stood out in Monday night's win over the Pelicans.

Share All sharing options for: GIF Breakdown: Spurs at Pelicans 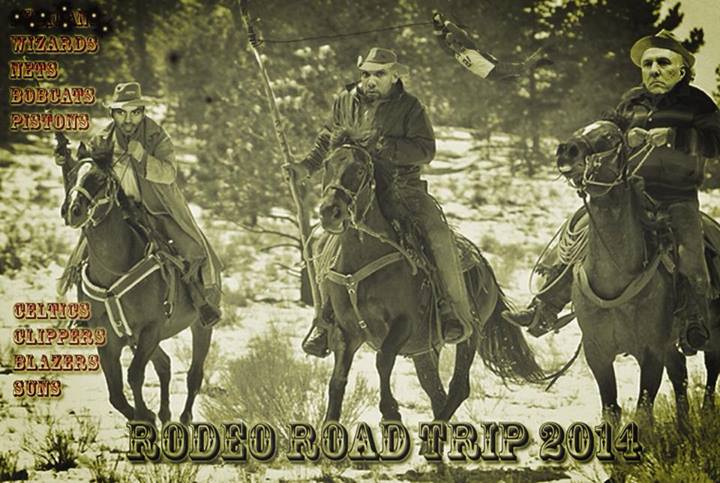 Let's start this Breakdown with the Spurs coming out of the tunnel before the game starts. Everyone looks pretty happy, jogging and smiling, ready to play the first game of the trip. You have to love Tim Duncan, who was playing his 605th road game on Monday night. He's the last one into the tunnel and calmly walks toward the arena, skips four times, and begins to jog just as he reaches the bright lights of New Orleans Arena. It's such a pleasure to still get to watch the veteran. 17 seasons, and it's all bonus Tim to me now.

Watch Tony Parker use a Splitter screen to work his way to the free throw line. Eric Gordon loses Nando de Colo for just a second, but it's all he needed to go backdoor, where Parker found him with a quick no-look pass right around Greg Stiemsma. Nando finished the play with a nice reverse layup.

I think that Tiago Splitter has been working with Boris Diaw. I don't remember Tiago having all that junk in his game. That's pretty nice footwork from the Brazilian big man who uses a pivot, a couple of aggresive dribbles, another pivot, a pump-fake, and another pivot before finishing with an up-an-under. More importantly, he takes his time and doesn't have the hurried gotta-shoot-ball-now feel that I often get from his post ups. In fact, that's probably the most impressive post-possession I've seen from Sparkles. I hope that he continues to work with DIaw, and it's nice to have him back.

Stuff like this is why Marco Belinelli has an unreal 63.8 field goal percentage within eight-feet of the basket. He is an outstanding finisher. In this wild one he is on a fast-break with Patty Mills who gives the ball up to Marco, who doesn't put the ball on the floor and instead finishes with his left hand without using the backboard. Look at how high the apex of that shot is. He must have some capicola grease on his hand, as he gets the ball to somehow go in. That shot is insane.

Ah yes, the Tony/Tiago pick-and-roll. After the Splitter screen, we see Parker go left, where he likes to take his jumper. It's a high-percentage look for Tony, but he wisely gives it up to Tiago who has a clear lane to the hoop. He doesn't put the ball on the floor and finishes with a solid two-hand slam.

During a stretch of the third quarter, and for crunch-time in the fourth, Tony Parker was unstoppable. Here we see him curl around another Splitter screen, and Ajinca must have forgotten that his fellow countryman loves that floater in the middle of the lane. One dribble in the lane and a sideways hop gives Tony the space he needs to score. I don't recall ever seeing Parker drive with his shoulders parallel to the paint like that -- a bit weird-looking, but a nice score.

Again, Tony uses a Tiago pick to score. This time he gets by Davis by getting him leaning into the pick, and creating separation with an amazing crossover. It's clear at this point that Tony's definitely going to get to the hole and finish. He's still 18-feet from the basket, but getting by Davis so cleanly put him ahead of any help that was going to come, and the paint is entirely empty. One dribble and two steps through the lane before finishing with a simple little layup. Tony was awesome Monday night.

Let's end this GIF Breakdown with a Tim Duncan dunk. Danny Green uses an off-ball screen from Tim to get get the ball from Tony. Verde dribbles it once, before putting a bounce-pass on the money to Tim who makes a strong move to the hoop before the emphatic jam. This pretty much put the game away for good, and the bench erupts with enthusiasm.

Every big on the Spurs bench is ecstatic when Tim scores. Aron Baynes, who didn't see a minute of playing time, literally jumps up out of his chair, yells, and gives a triumphant overhead fist pump. Tiago goes with the classic double arm-raise, signifying victory. But the best reaction has to be Boris Diaw, who provides so many layers of awesomeness. Bobo sort of calmly stands before going with a simultaneous leg kick and fist pump. To really emphasize his approval, he gives a second fist pump, this time extending his arm and fist, almost as if he were inserting the proverbial dagger. In fact, that's what we'll call this particular celebration, "The Proverbial Dagger." [Editor's note: I like it. -jrw]