The Spurs stopped their three-game skid by narrowly defeating the Sacramento Kings in San Antonio.

Saturday night, the injury-riddled Spurs battled the Kings in San Antonio. Tiago Splitter made his much anticipated return to the Spurs' starting lineup, and newcomer Shannon Brown also started to give the Spurs yet another new look to begin a game. Still without Danny Green, Kawhi Leonard and Manu Ginobili, the Spurs found themselves in a very competitive game with the team sporting the worst record in the West, even though DeMarcus Cousins missed the game with an injury of his own. In the end, the Spurs emerged victorious thanks to a total team effort. 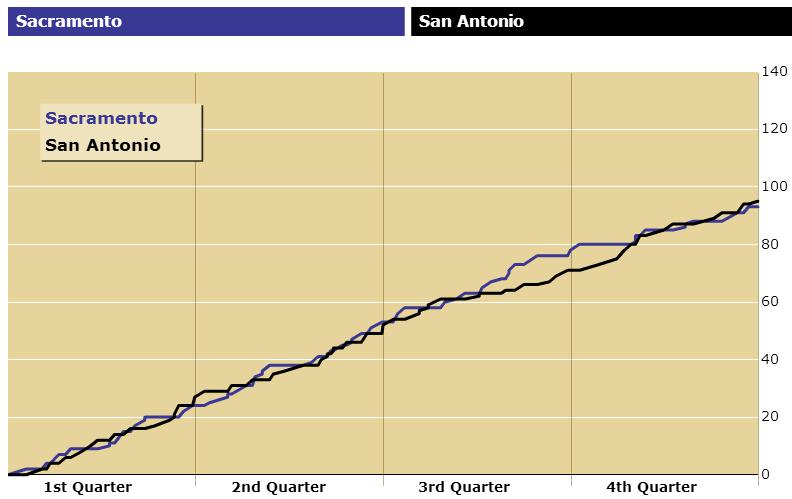 I love these game flows because they allow you to quickly understand exactly how the game played out at a glance. As you can see, this one was close throughout with many ties and lead changes. The Spurs' biggest lead of five points occurred early in the second quarter while the Kings led by 10 towards the end of the third.

Since Kawhi succumbed to injury, I feel like the Spurs are giving up way too many easy looks to their opponents. These three guard lineups are painful to watch. Pop started the game with Tony Parker, Cory Joseph and Shannon Brown. From there, he subbed with Patty Mills, Marco Belinelli and Nando De Colo, always keeping three guards on the floor in the first half. Even with Tiago back from injury to help protect the rim, the Spurs' defense is just not formidable with so many guards on the perimeter.

The Spurs' smaller players are not capable of keeping bigger forwards out of the paint. Even when they anticipate the offensive move, they are not strong enough to dissuade the drive. The penetration ultimately results in defensive breakdowns and poor defensive rebounding position, since our bigs have to scramble in help defense. Without defensive stops, the Spurs are unable to make runs. Before the injuries, the Spurs would make a few runs a game that ultimately were the difference. Without the ability to go on a run, the Spurs' best chance at winning seems to be to keep the game close and steal it in crunch time, as they did tonight.

For me, the turning point of the game occurred with four minutes remaining in the third quarter with the Spurs down four points, 67-63. Coach Pop finally gave up on the three guard lineup and subbed in Matt Bonner for Marco Belinelli. Instead of Tony, Cory and Marco, the Spurs went big with Bonner, Diaw and Ayres. I was just happy that Pop was trying something new. The Kings had controlled the game from the start and it felt as if this one was about to slip away.

The first two minutes of the experiment didn't go well. The Spurs quickly found themselves down by 10 but Popovich didn't panic and let the bigger lineup continue to fight. He subbed Tim Duncan into the game for Tiago Splitter and the future hall of famer steadied the Spurs as they didn't allow the game to get out of hand. The Spurs cut the lead to seven at the end of three.

The Spurs began the fourth with Patty Mills, Nando De Colo and Marco Belinelli. Although these are three guards, this is one of the biggest "traditional" lineups the Spurs can put on the floor. Both Nando and Marco are 6'5". The Spurs were able to get away with it because Rudy Gay rested to start the quarter and although the Kings had a mismatch with Marco defending Derrick Williams, they didn't take advantage.

With five quick points from Patty Mills, the Spurs quickly closed the gap and forced the Kings to take a timeout at the 8:30 mark with just a two point lead. The Kings subbed in Rudy Gay and Popovich responded by once again going big with Boris, Tiago and Bonner. The Spurs didn't go back to their three guard lineup till the final play when Pop was trying to avoid a Sacramento 3-pointer. Though the Spurs were unable to pull away, their defense finally took a stand thanks to the big lineup. It felt like months since the Spurs were last able to shut down an opposing offense in the fourth. Tonight, they forced the Kings to shoot just 25% from the field in the fourth and make just one of three from beyond the arc.

To the Kings' credit, Sacramento never gave up. The Spurs seemed to be destined to win this one comfortably but the Kings wouldn't allow it. With the Spurs leading by three with 1:19 remaining, Isaiah Thomas tied it with a 3-pointer. Tony Parker answered with his own 3-pointer to give San Antonio a cushion. Thomas then made a tough jumper to cut the lead to one. In a broken play, Tony Parker jumped a pass to Patty Mills that should have been picked off. Patty somehow came up with the ball and as he attempted to create some space for a desperation heave with the shot clock about to expire, the officials gifted the Spurs with a foul on Marcus Thornton. This reset the shot clock and forced the Kings to foul. Tim missed both free throws but Diaw saved the day with a nice defensive effort on Rudy Gay that forced a miss. Tony made one of two at the line and the game clock expired. The Spurs won, 95-93.