Rehash: Is it time for the Spurs to end the experiment?

The Spurs started a guy named Shannon Brown and won. And the rodeo is coming to town. And some people think its time to pull the plug on the experiment. So can Spurs Batman save us all?

Share All sharing options for: Rehash: Is it time for the Spurs to end the experiment?

The rodeo is coming to San Antonio, and the rodeo takes no prisoners. I saw firsthand the damage the rodeo can do when the media parking lot was filled with animal pens so I was forced to park with the unwashed masses and walk with them to the arena like a herd of wild cows. Some kid bumped into me and I yelled him down with a throaty "I'M THE MEDIA GIVE ME SPACE HERE," but then promptly apologized when his rather large father in a rather small Tony Parker jersey threatened to eat my teeth.

Eat my teeth? How is that even possible?

The game was tight throughout, until the Kings took a seemingly commanding lead about midway through the 3rd and it appeared as if the Spurs would fight hard but come up short, again.

But with 8:33 left in the game, Patty Mills hit a three pointer to close the gap to two. The Kings called a time-out with the score 80-78 and the crowd was rocking. Then as if on cue the Coyote brought out his t-shirt cannon and the roof was literally raised. After the timeout Tiago Splitter made a reverse lay-up and Matt Bonner played the last few minutes like a man without a mask to hide behind and the Spurs held on for a 2 point win. It wasn't pretty, but damn, was it fun.

I took my daughter to the game and she cheered wildly during the entire sequence described above. She sat in an empty seat on press row with me and asked me if it was ok to cheer, or if she had to remain impartial.  I told her to cheer her face off for the Spurs, and she did.

On the drive home I was thinking through the night and trying to decide how I'd describe the game. My daughter was asleep, content that she'd helped cheer her team on to victory, and I was listening to React with Geoff Sheen on WOAI.

About halfway through, a caller caught my attention. He suggested that "it's time to end the experiment and trade Tim Duncan and Manu Ginobili while they still have some value." He said he's extremely worried about the next decade so it's time to blow the whole thing up and start over.

Now the guy is going to catch a lot of grief and this is by no means an attack on him. The thing is, his thinking isn't even on the extreme fringe of many Spurs fans.

Over the last 16 years the Spurs have been one of the most successful franchises in all of professional sports. And that, as we all know, is a vicious double edged sword. It means we aren't supposed to have fun at a game and enjoy a last second win against the Kings, because we can't. There's just too many things to be worried about.

We have to be thinking about the next decade or how Timmy's knees are holding up or when Pop is going to retire or why can't Jeff Ayres catch a ball or, if given the chance, would Aron Baynes eat some of the smaller guys?

And if he eats all the guards, how would the guard play be?

Look, I don't profess to be the wisest or most tenured Spurs fan, but I know greatness when I see it. And if given the choice between having to take a clinical approach and dissect every deficiency and mitigate every shortfall or just cheering my face off for my favorite team, I'll join my daughter every time in breaking protocol on press row.

It's not going to last forever. Nothing does. So I'm going to do my best to enjoy it while it's right in front of my face.

A man dressed as Spurs Batman sat not far from us, which in itself is worth mention. But my focus was on his friends. He was there with two other guys, whom I presume to be buddies of his as they sat on either side of him. Spurs Batman was up at every time-out dancing and making his Super hero faces and trying to sign autographs for kids even though they didn't really want them. I guess I just really admire his friends, because they seemed like they just wanted to watch a Spurs game, but had to bear the burden of being friends with a caped crusader. A life-saving superhero that gladly posed for pictures outside the men's bathroom at halftime. 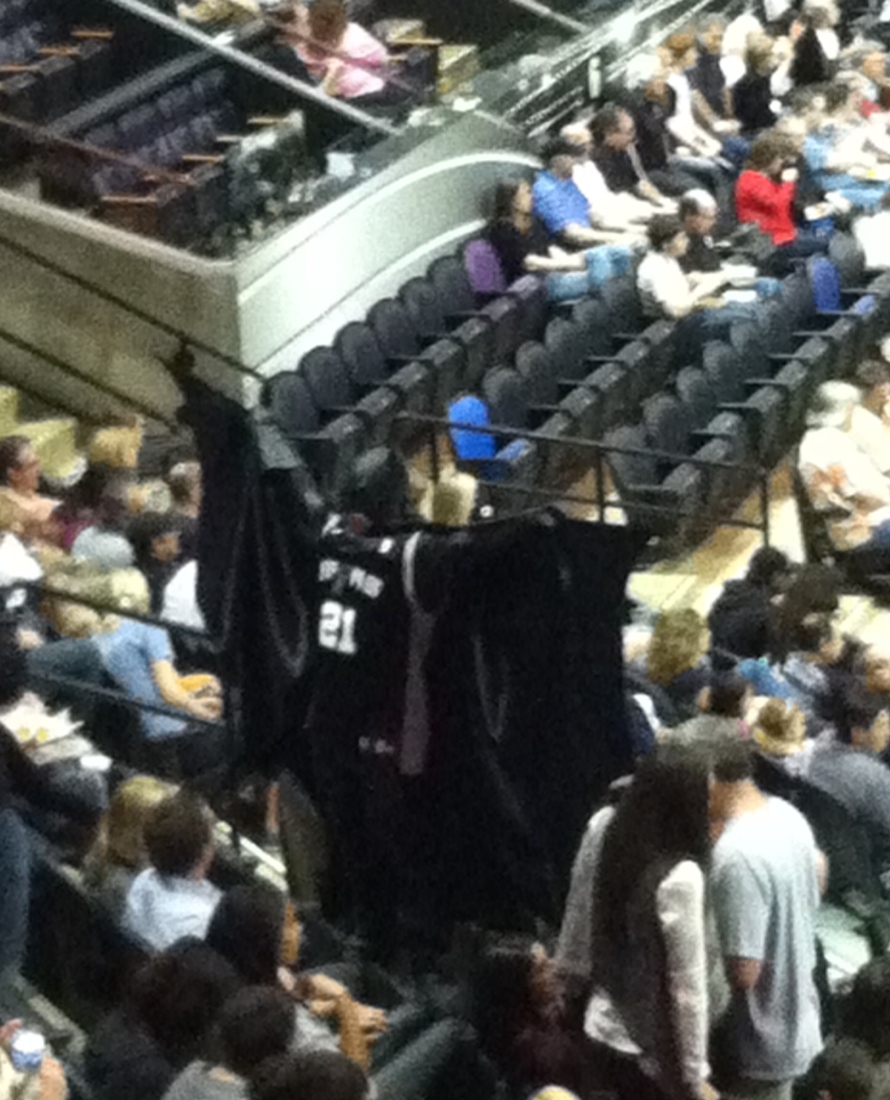 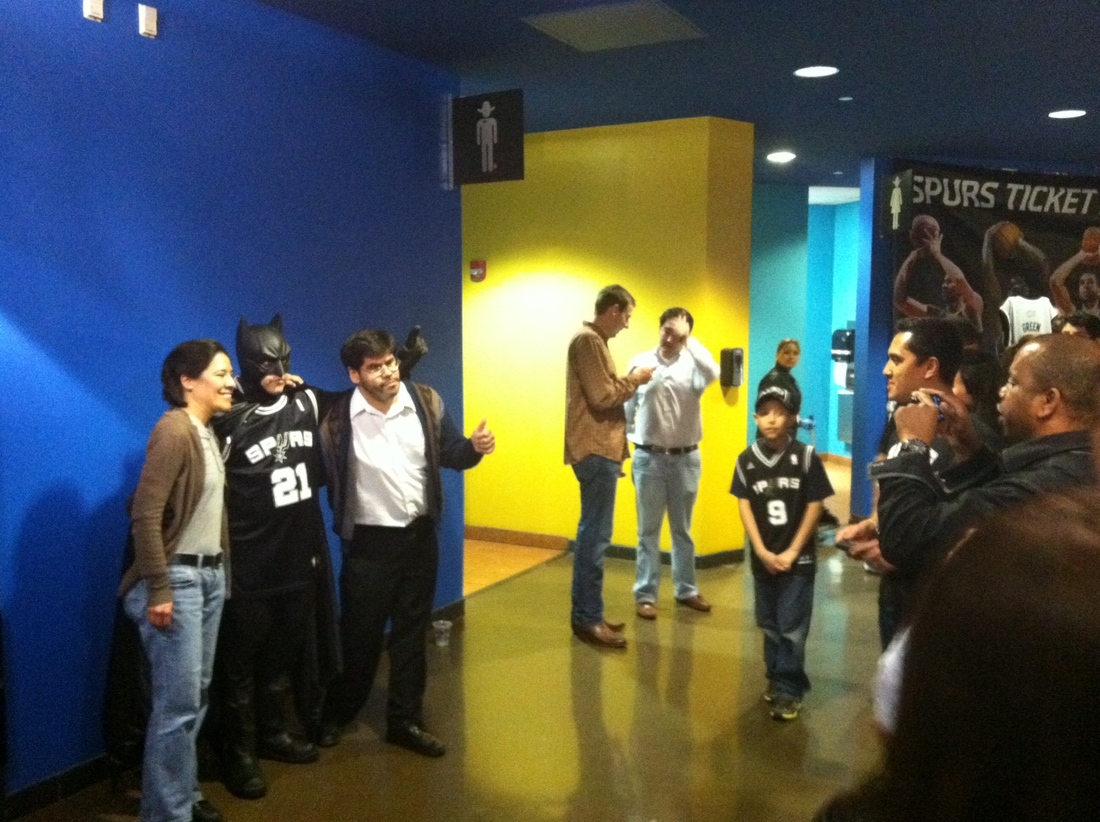 Now onto the opposite end of the spectrum. I want to highlight the most efficient fan I've ever witnessed. Watch in this GIF how he intimidates the King's free throw attempts while saving all the energy in his arms for later. Perhaps Spurs Batman should recruit this guy because he's obviously the smartest man in the arena.

Brown said he found out Saturday morning at shootaround he would be starting vs. Kings. Was surprised, to say the least.

I was so amazed, I put that Spurs possession in super slow-mo. It's like trance music in basketball. http://t.co/KVjfMDVuSv

The best way to understand the Super Bowl is through Taiwanese animation: http://t.co/EhFkkG4ptI pic.twitter.com/0uYzmao4FE

Going Forward The Spurs Need To

Just get out of town before that crazy rodeo gets here and all those horses start fighting in the parking lot and breaking metacarpals again.