Ah, preseason basketball - very relaxed atmosphere. No one is really too excited. The games are not much to write home about, not a lot of special moments. But then this happened at the preseason game against Atlanta.

As the first quarter was winding down, a little girl sitting about 15 rows off the floor, at the corner near the Spurs bench, caught the Coyote's eye. As he climbed over a couple of rows of seats, she came down the steps to meet him and eagerly gave the furry critter a hug. I am always amazed at the love and trust that children show the Coyote. 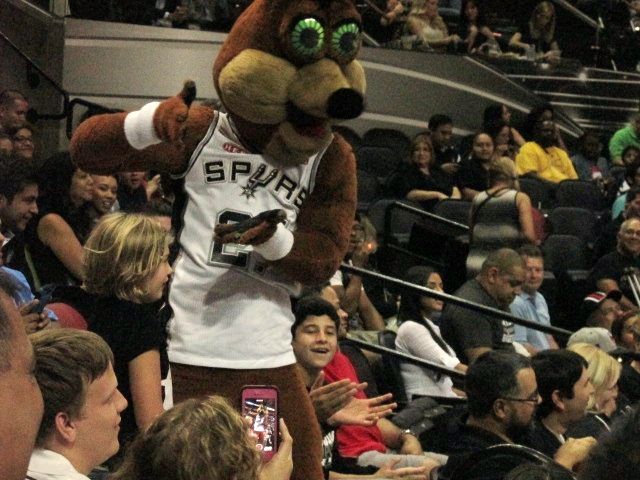 She pointed to Tim Duncan on the bench, and must have told the Coyote she wanted to get Tim's attention so she could wave at him. The fans around her began to call Tim's name, but he did not turn around. The Coyote, with his excellent miming ability to communicate, somehow let those of us in the area know to shout "Tim Duncan" on the count of three. We shouted, but Tim still did not turn around.

The Coyote went into action. Seeing that the first quarter was about to end, he swooped the little girl up in his arms and carried her down to the floor. When the horn sounded to end play and the Spurs players stood to huddle up during the timeout, he approached Tim as he stood in front of the bench. And Tim Duncan, grinning from ear to ear, reached out and accepted a hug from the little girl. She has a wonderful memory, and so do all of the rest of us who were sitting on the baseline near the bench. (And all the pro photographers missed this moment!) 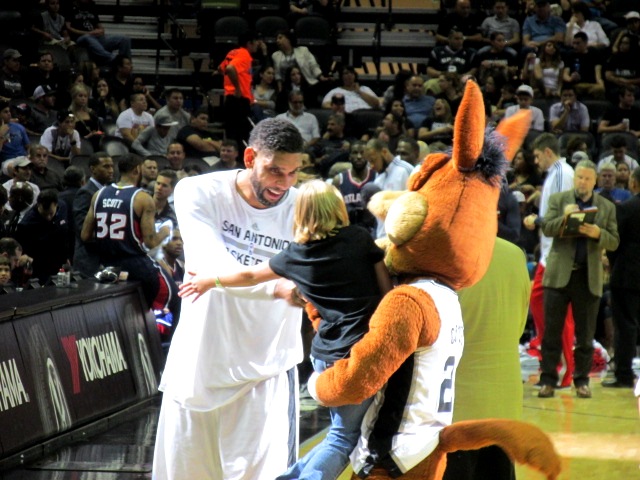