Dunks and alley-oops abound at the free Spurs scrimmage

Matt Bonner aggressively looked for his shot and led the team in rebounds. The Spurs had three alley-oops and a handful of other dunks. Gregg Popovich was very relaxed. We probably shouldn't look for too much meaning from this.

Share All sharing options for: Dunks and alley-oops abound at the free Spurs scrimmage

The Spurs tipped off their title defense in front of their fans Wednesday night with a free scrimmage at the AT&T Center, and not only was the price right for all kinds of families who might not otherwise have the budget to afford a trip to a real game, but all the seats were first-come, first-serve, meaning even those who regularly attend games got the chance to get far more up-close-and-personal to their heroes than they ordinarily would.

And that certainly included your intrepid reporter, who was the beneficiary of the same "first-come, first-serve," rule for media that the fans were for regular seats. Instead of chilling out on the baseline in upper 103, I got to cover the scrimmage from this view. 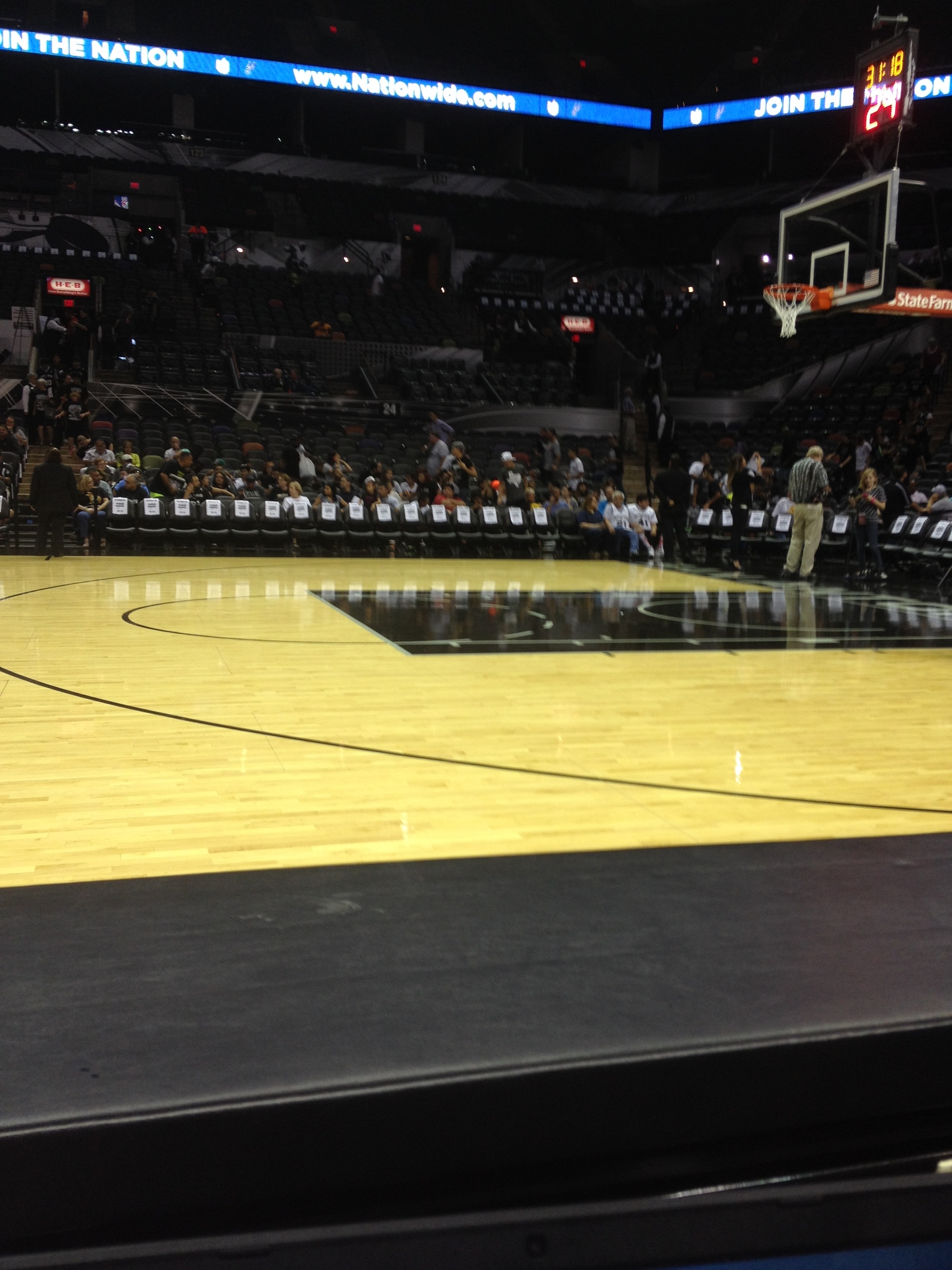 Not bad. Not bad.

The first Spur of note to make an appearance was Sean Elliott, who signed autographs and posed for pictures with many fans behind the scorer's table. As more years pass, you wonder how many fans even remember Elliott as a player and how many just know him for his broadcasting work. He reminds me of San Francisco Giants legend Mike Krukow that way.

Soon after Elliott came out, a Spurs staffer passed out the lineup sheet, informing us who would comprise "Team Black" and "Team Silver." 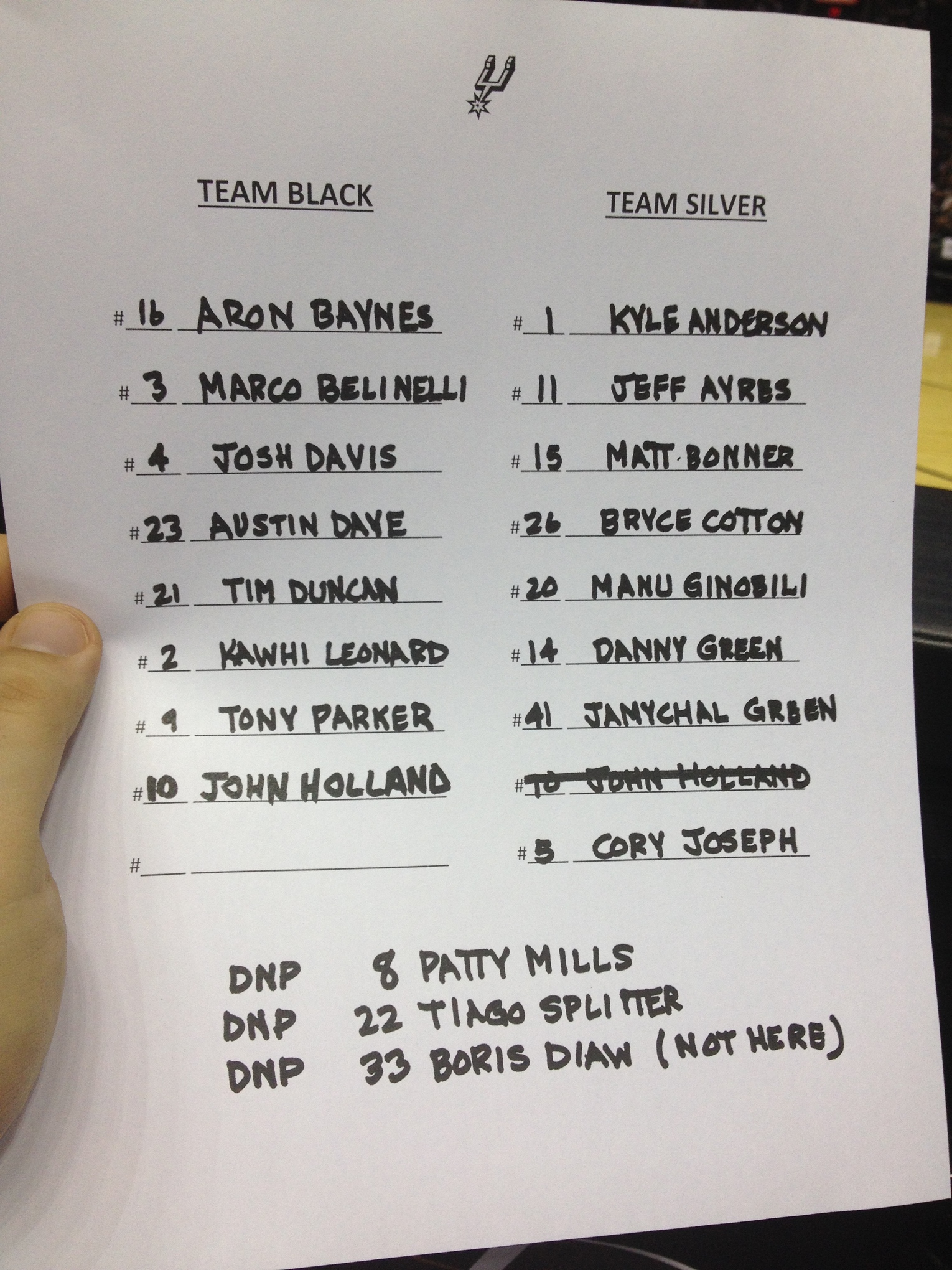 Team Silver looked to be in trouble, and Dan McCarney of the Express-News tweeted to that effect, but we talked about how they had Ginobili, and he's exactly the kind of guy who'd go all out in an exhibition in front of the fans like this, whereas Duncan and Parker are more likely to relax and not take it out of first gear.

Gregg Popovich addressed the fans before the tip, encouraging them to yell and scream and have fun and pledging to them that the team would do its best to make them happy all year long, "which means to win." Pop then came over to the bench area for a bit and was serenaded by fans who kept chanting "Pop! Pop! Pop!" over and over. He chuckled and eventually yelled at them "Too many!"

Once the teams started warming up, I felt a sense of dread as my incredible view turned into the worst seat in the house as a phalanx of assistant coaches lined up right in front of me. I couldn't see a thing and I was a bit worried they'd stay in this spot all night. 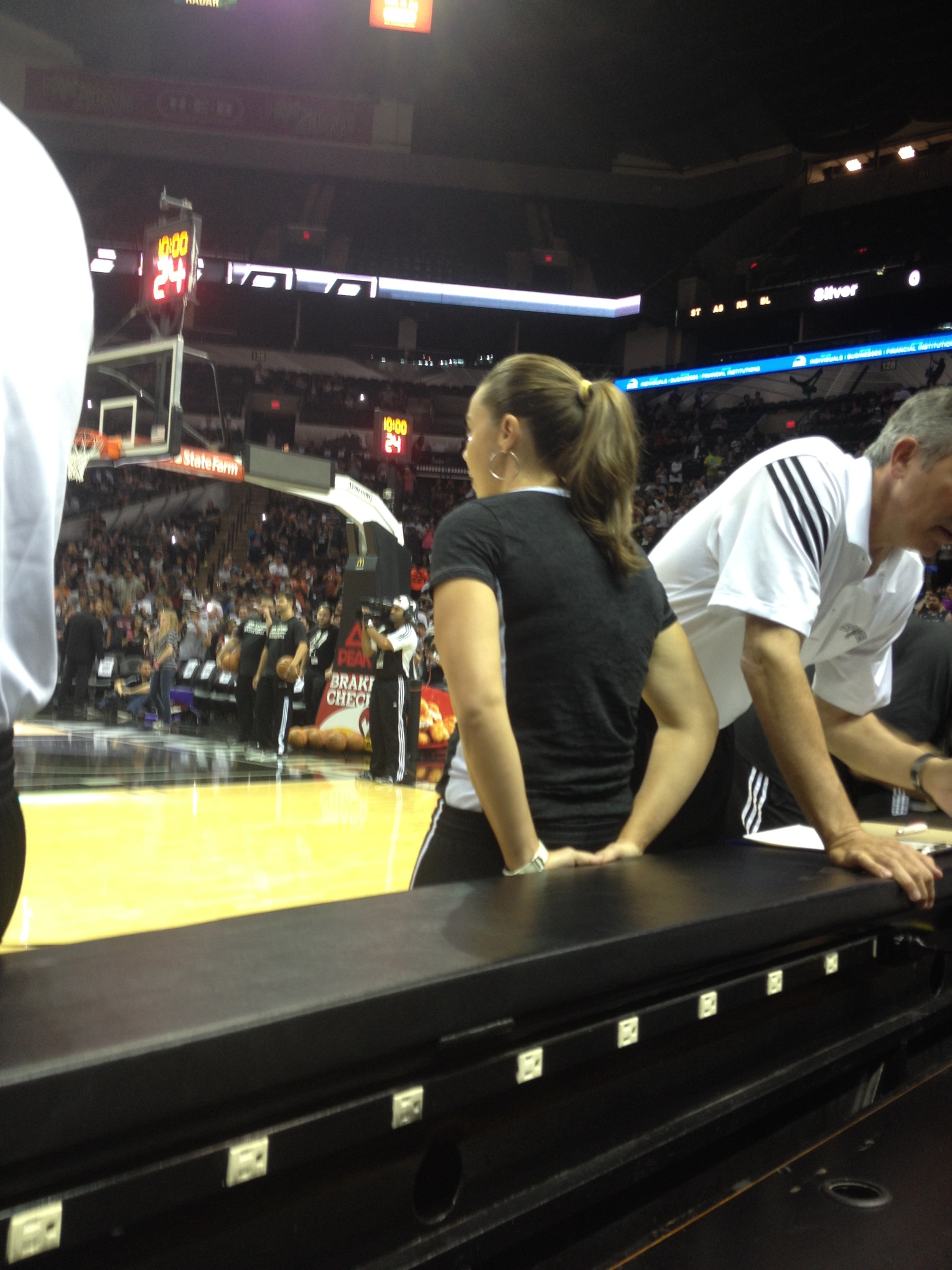 Fortunately, my fears proved unfounded and the assistant coaches retreated to the two benches right before tip. Pop was primarily an observer on this night, taking a second row seat behind Team Black's bench, with assistants Jim Boylen and Becky Hammon in charge of that squad, while Ettore Messina and Ime Udoka ran Team Silver. Every once in a while, Pop would ask a question or offer a suggestion of Parker, Duncan or Belinelli, but otherwise he stayed out of the way.

Once the scrimmage started, with 10-minute quarters and a running clock, it quickly became apparent that many of the sequences we'd see would bear little resemblance to the Spurs basketball we've become accustomed to. Literally the first two buckets of the game were Austin Daye scoring inside with a half-hook over Matt Bonner for Team Black and then Danny Green driving and dishing superbly to Jeff Ayres, who caught it cleanly and slammed it home. Not the kinds of plays we regularly saw last year.

Bonner looked the most active of anyone the first few minutes, running and cutting aggressively. Ginobili hit him on the move and Bonner finished with some impressive agility and a bit of English around the rim for a lay-in and then knocked down a three shortly after. Leonard swished a three of his own on the other end and had five early points for Team Black. Ginobili danced around Duncan for another layup, and because he doesn't know what "scrimmage" means, he looked to the ref for an and-1 call that didn't come. Everyone seemed to be running and cutting and moving at a pretty good clip, except for Duncan who was clearly not into it early on but warmed up late in the period with a couple of buckets over Ayres inside. Leonard picked Ginobili's pocket midway through the first period and then stole a cross-court pass intended for Green and went coast-to-coast for a slam, but it came after the buzzer so it didn't count -- which seems ridiculous to type as the entire game didn't really "count." Team Silver led 15-11 after one.

A couple of notes about courtside seats - contrary to popular wisdom, I couldn't hear anybody swear. In fact, I couldn't hear anything at all. Even up close, the noise from the music and the fans drowns out most anything the players say to one another 15 feet away on the court. Maybe there is more emotion and shouting in a real game situation, but I was disappointed to not hear much interaction. Every once in a while I heard a coach shout out a play call, but that was about it.

Also, it's just mind-boggling how big and fast these guys are on the move, even at half-speed. When a regular out-of-shape Joe like us plays full court basketball, the court seems enormous and it takes forever to get up and down over and over. NBA players shrink the court down to playground size, the way we had it as schoolchildren, with the 3-point lines meeting one another at the apex at center court. They get from one end to the other in the blink of an eye and just take up so much of the physical room out there. It reminded me of a story I heard about Pacers coach Frank Vogel last year, where the first day of training camp he had his starting five line up a few feet from one another and spread their arms out fully, until each guy could only touch fingertips with the other. The five of them together covered almost the entire width of the court. Vogel used that visual to demonstrate to his guys how much length they have and how much ground they can cover defensively when they're all on the same page.

This just in: NBA players are freaking big.

The second quarter turned into a duel between Leonard and Green. Leonard was hardly gun-shy out there and took delight (as much delight as one can take without showing a hint of emotion) by canning jumper after jumper over rookie Kyle Anderson. His baseline stroke was in mid-season form. Green, meanwhile, had three layups, including one drive around Leonard, and swished three 3-pointers, two of them on Daye who couldn't close in time and one on Leonard, who did, but Green pump faked around him, took a step to his right and hit a leaning bomb off one foot that he admitted was lucky afterward. Ginobili had most of the set-ups for Team Silver, including one to Bonner who was fouled by poor Daye for a potential four-point play, except he bricked the free throw. Leonard responded with an absolutely sick Kobe-esque turnaround fadeaway swish from the baseline over SloMo. The most animated I saw any coach the whole night was Boylen when he yelled to get the clock-operator's attention to stop the clock after a foul call. Ginobili suckered Daye into a shooting foul after pump-faking him off the floor, the same way he's done hundreds of times in his career. Team Silver led 42-35 at half, and there wasn't any kind of intermission, the two teams just simply switched sides.

Patty Mills strolled by around half time and I had a momentary pang of sadness, realizing he'll be out a while. This is the kind of event where he would've feasted, raining one open shot after another without conscience. Thankfully, Mills didn't look like he had done much feasting off the floor, as he appeared to be very trim. To be frank, if there's any concern with his fitness it's that he seems to have lost some muscle tone as well. His arms and legs are rail-thin, and Patty just looked tiny to me -- all skin and bones.

Green, who by my count led all scorers with 15 at the half, buried another three on the first play of the third quarter and shortly after slammed home an alley-oop feed from Cory Joseph. I did not know Green had that club in his bag. In short order Team Silver threw down two more oops, both from springy camp-invitee JaMychal Green, the first from Ginobili and the second from fellow rookie Bryce Cotton. Green would've had an alley-oop hat trick in the quarter, but another feed from Cotton was a bit off the mark. Anderson found himself with the shorter Belinelli guarding him, backed him down deliberately in the post and scored easily. Bonner pump-faked around one defender and scored an and-1 floater, with the foul called on an annoyed Duncan. It was 59-48 after three, and it was at then that Team Silver took Ginobili out just to give the game a chance to be competitive. It was just too easy for him to find teammates for easy layups or wide-open shots on practically every possession. 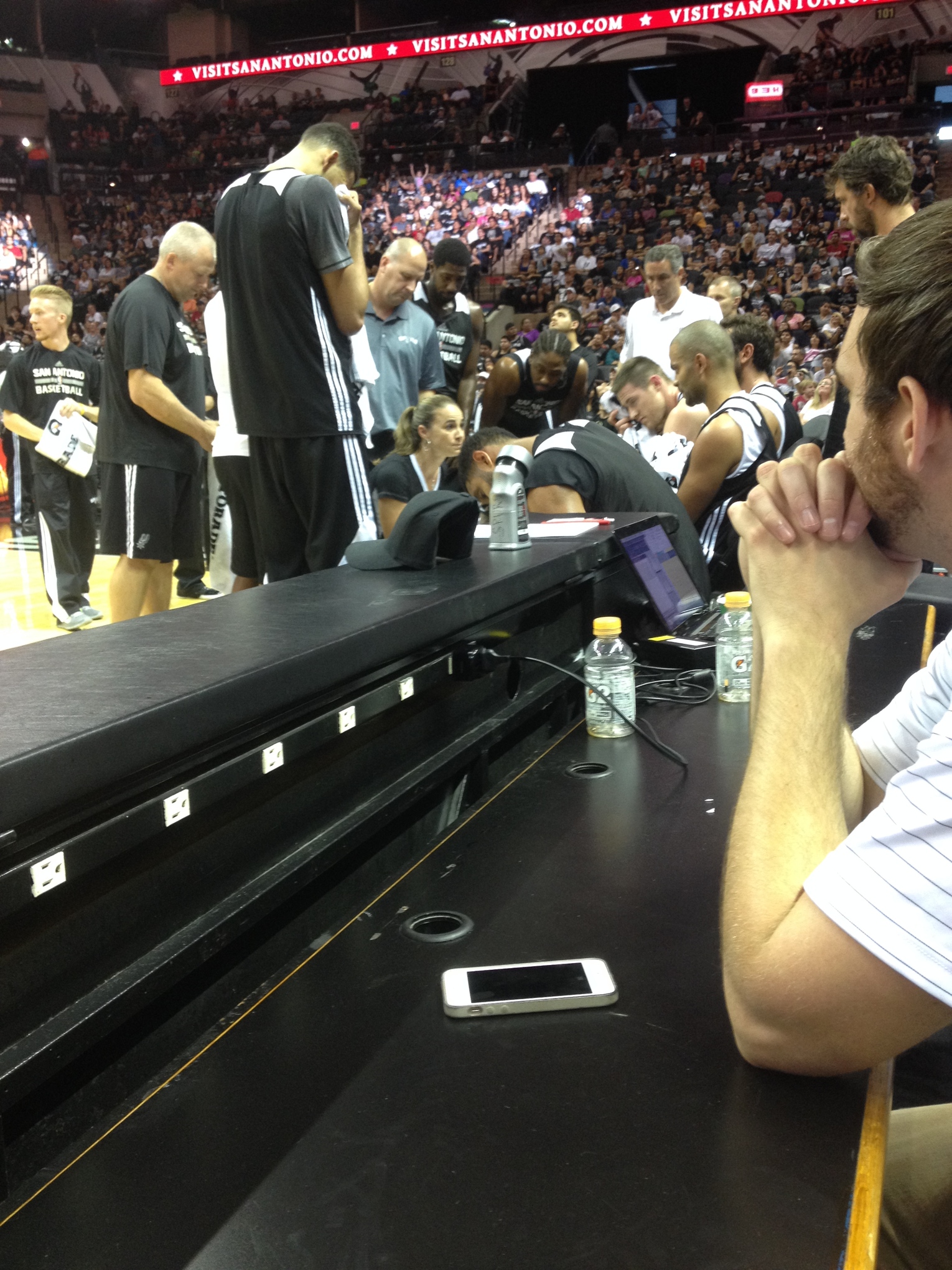 It's quite apparent that Hammon's promotion as the first full-time, paid female assistant coach in league history will be anything but a ceremonial position, not that you'd ever expect it to be with the Spurs. It was Hammon, not Boylen, who was in charge of every huddle for Team Black, and she was the one diagramming plays for the team and calling out plays at times for Parker. From my vantage point I couldn't tell if it was Messina or Udoka leading the huddle for Team Silver.

In the fourth, Leonard scored on a hook over Danny Green, who responded on the next trip down by hitting a running floater. Anderson had an impressive and-1 reverse lay-up after a slow-motion hesitation dribble got a defender off-balance, a veteran move for the Diaw clone. If ever a nickname fits, it's "SloMo," for Anderson. Late in the game Bonner had Parker guarding him in the post off a switch and patiently backed the Frenchman down, drew the double-team and fed Ayres with a bounce pass for a dunk. The dimunitive Cotton ended the scrimmage in style with an emphatic breakaway tomahawk jam at the horn. Team Silver with the massive upset, 76-57.

The Spurs tweeted out some unofficial stats afterward. Here are the particulars for the victors:

And for the runners-up:

The most important thing, of course, was that no one seemed to be the worse for wear and a good time was had by all, with the Spurs throwing down a month's worth of slams. 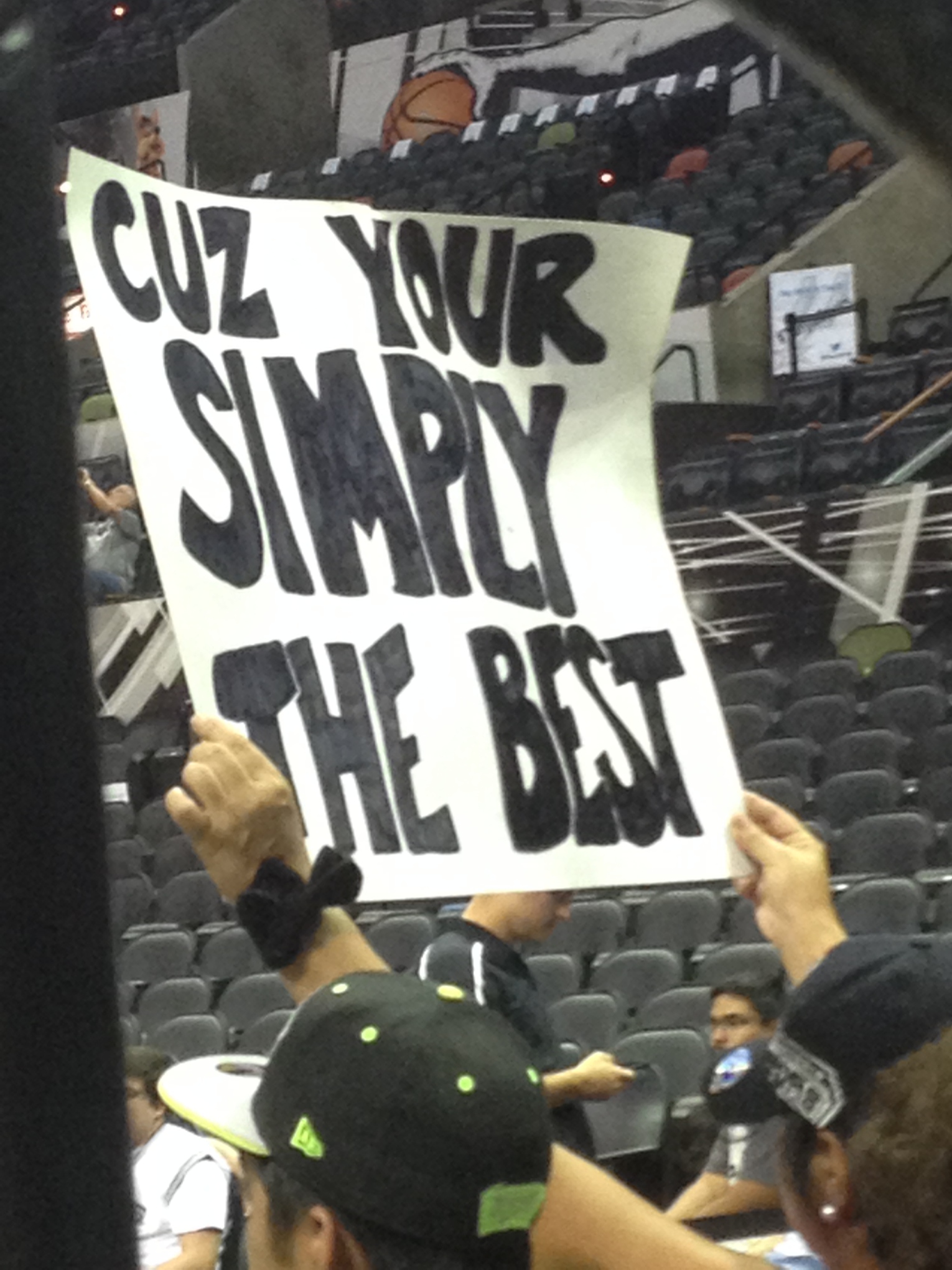