Behind The Rehash: Spurs vs. Mavericks

The Spurs handled the Mavericks on a grey, drizzly evening in San Antonio, but there's so much more that you never see.

Share All sharing options for: Behind The Rehash: Spurs vs. Mavericks

Have you been to Portugal?

Yeah, but it's not too bad.

Perhaps it was the early start because there were fewer people around and the music wasn't playing, but the arena was quieter than usual.

Bill Schoening and Coach Boylen chatted away on the bench as two certain Hall of Famers slowly worked through their shooting drills just a few feet away. They talked about vacations and their favorite places but the conversation was merely background music as all eyes were on the two men on the court as they loosened up. Tony and Tim were each going through their routines and it was easy to hear the chords pop on the net as they made shot after shot. It was in that moment that I started to think about the audience at Pounding the Rock and how many, many readers will never get to experience those simple moments firsthand. So I decided to do something about it.

When I got home I asked my wife if I could buy a plane ticket, hotel room and game ticket for everyone at Pounding the Rock. She suggested I do bad things to myself.

So it was on to Plan B: Behind the rehash.

Get discounted tix, courtside warmups, and a shirt

PtR readers will be able to buy a discounted ticket for the game on January 22nd versus the Thunder, get passes to enter the arena early to watch the teams warm up, and you'll receive a free Spurs t-shirt.

Spurs pick up M. Thomas' contract for rest of year

The Spurs will not waive Thomas and his contract will become fully guaranteed for the rest of the season. But can he crack the rotation?

Get discounted tix, courtside warmups, and a shirt Spurs pick up M. Thomas' contract for rest of year

The first thing you'll notice is the genuine sense of welcome you feel as you enter the arena. Lot 4 is our designated parking and we're waived through immediately. It's great to be able to get there early before all the traffic so the parking spot is always superb. There's a side entrance that always has the same friendly security guard so after a quick raising of arms and waive of his wand (turn around please) it's off to the elevator.

The elevator attendant will ask everyone what level they'd like and the experienced folks answer "event." After a few seconds the doors open to a sea of grey. The walls are grey. The floor is grey. Up above is piping and electrical and it almost seems as if you're in a tunnel. Cavernous yet closing in on you, all at the same time. The hallway winds first to the right then back to the left. There's the food service office. About halfway through is a hallway to the right that leads to the visitor's locker room and the Coyote's locker room. Yes, the Coyote has his own room.

There's no need to take that right turn tonight though. A few hundred paces forward, down this long grey hallway is when things get good. There's the Silver & Black Dining Room on the left, with the attendant that always has a huge smile on her face. But we're turning right.

There's a huge black curtain along the left hand side of the wall leading to the Spurs locker room but as soon as you make the turn you don't even notice it. Because, on most nights, the first thing you see is a few of the players standing at the end of the tunnel signing autographs with the court, and the massive AT&T Center in all it's glory, immediately behind.

Tonight I slowly walked past Kawhi Leonard as he's signing autographs and like any red-blooded man I sized him up. There's no doubt in my mind I could box him out easy.

The surreal moment watching Tim and Tony warm up with Schoening and Boylen serving as the background soundtrack occurred only a few minutes later. Then when Dirk came out I walked to the visitor's end of the court to watch him, more out of morbid fascination than anything else. One question Dirk. What's up with the sweats? 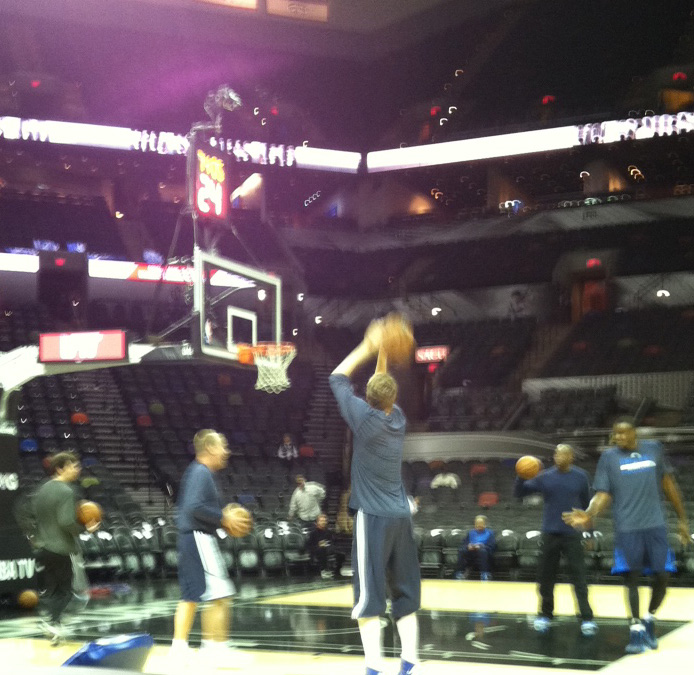 With about an hour left before tip-off most head to the media cafeteria to eat. Tonight I grabbed a pile of brisket and sat with Matthew Tynan, Mike Monroe, Dan McCarney and a Mavs beat writer and listened as they discussed the biggest comebacks they've ever seen, crazy half court shots and Barbra Streisand. The language can get rather blue, as the old timers would say, and it's beautiful.

Then, wait behind RC Buford as he refills his drink, grab another Diet Coke and it's off to press row to watch the game.

Timmy, as per usual, posed for a picture after the captains meeting at half-court and then sprinted over to shove Sean Elliott off his stool with the bright TV lights catching it all. Papers flew, Sean smashed into the scorers table and Timmy took a pass from Danny Green to shoot a reverse layup. Routines are important to these guys.

Then as the lights went down Tim ran to the rim to hang from it, but an ESPN cameraman was in his way. Tim promptly moved him and did his hang thing.

The game itself was rather uneventful. The Spurs dominated the boards in the 1st quarter, played pretty sloppy in the 2nd, and then blew it open in the 3rd, led by Tony Parker who obviously wanted to get home early. He's your MVP of the game (although Tim had another double/double) finishing with 25 points including 14 in the aforementioned 3rd quarter that put the game out of reach. Boris Diaw also deserves a nod as he gave Dirk Nowitzki fits all night, holding him to 8 points on 3-14 shooting.

During Tim Duncan's excellent night, he had this put-back slam towards the end of the second that is becoming more rare by the game:

Also in the 3rd, in an obvious salute to Manu Ginobili, Marco Belinelli hit a 3 and was fouled. Unfortunately he missed the chance to cash in on a 4 point play but seconds later pump faked and then drove to the rim with the most Euro Step step you'll ever see and scored, leading to a Mavs time-out. I fully expected Marco to kiss Manu on the head on his way off the court but it didn't happen.

The crowd started to leave about half way through the 4th, even though the Dot Race was still out there for the taking. Finally, with about 2 minutes left, the Dot Race commenced but few people were left to celebrate the win by the green dot. It was a sad ordeal.

In the post game press conference, Gregg Popovich was asked how he thought the team responded after the near meltdown in Memphis the night before. His response?

Were you at the game?

Yes Pop. We were there. We were all there.

As I left the court and entered the maze of grey hallways I somehow stumbled into Utah Jazz coaching legend Frank Layden in a Buffalo Bills jacket and his wife who were looking for the elevator. I showed them the way and we walked together through the final few turns. We boarded the elevator and I said "plaza" to the attendant like an experienced vet. Coach Layden and his wife went their separate way and I walked out into the grey, drizzly night.

On my way home I had to slow dramatically as a man pushed a refrigerator across Houston Street in front of me. I looked twice and it was definitely a refrigerator.

I pulled into my driveway just as the fog was thickening. I kissed my family goodnight, asked my wife the question and then opened the laptop to write.