Spurs sleepwalk down the stretch, need overtime to beat Grizzlies, 110-108

A terrible string of plays at the end erased nearly everything good the Spurs did in their first game without Tiago Splitter.

Share All sharing options for: Spurs sleepwalk down the stretch, need overtime to beat Grizzlies, 110-108

The story coming into the game was how the Spurs were going to respond to life without Splitter. Tiago is not the most celebrated player on the roster, but his importance to the Spurs' schemes is undeniable, especially against a team like the Grizzlies. Zach Randolph ran wild on the Spurs in 2010-11, but Splitter has done a good job of containing him ever since, which helped start a period of dominance for San Antonio. Fortunately for the Spurs, Jeff Ayres did a solid job of replacing the Brazilian in Memphis.

PtR readers will be able to buy a discounted ticket for the game on January 22nd versus the Thunder, get passes to enter the arena early to watch the teams warm up, and you'll receive a special Spurs t-shirt.

It's not a silver lining, and it's not the cliche "blessing in disguise." Being without the Brazilian pivot man for three to five weeks as he recovers from a sprained shoulder isn't the end of the world for the Spurs.

The Grizzlies tried to run their offense through Z-Bo but Ayres did a good job of beating him to his spots in the first quarter. Randolph had to settle for outside shots way too often while the Spurs offense was humming, with Marco Belinelli putting on a clinic in how to cut to the basket without the ball. But as has been the issue this year, the Spurs were missing the appropriate fear against a team that was missing its best player. The Spurs grew complacent and the Griz kept it close.

As the reserves checked in, the Spurs seemed primed to crack the game wide open. With Patty Mills and Belinelli providing the firepower, the Spurs started to pull away. But the underrated Jon Leuer kept the Grizzlies in it despite receiving little help from the bench playmakers. With the Spurs going small, Memphis worked the ball to Randolph in the post against Tim Duncan to end the half, but Big Fun outscored Z-Bo six to four in the second to keep the Spurs in control going into halftime, 53-41.

The Grizzlies are not a team that quits easily, even without Gasol. Memphis started hitting their mid-range jumpers while Duncan's misses knocked the Spurs' spacing out of whack. But with Manu Ginobili and Boris Diaw clicking -- and the Grizzlies' shooters coming back to earth -- the lead stayed around the double-digit mark for much of the third and fourth quarters. Maybe I'm just jaded after watching the Spurs go on cruise control and win this type of game earlier this season, but I didn't feel like the win was in jeopardy at any time, not even when Memphis went on a 7-0 run coming into the final minutes. Timmy answered with a bucket and Belinelli seemed to put the final nail in the coffin as he hit a three-pointer of a screen.

And then the Grizzlies went on a ridiculous run fueled by some of the dumbest play I remember witnessing from the Spurs since I started watching them. Let's recap:

- with 1:49 to go, and the Spurs leading 96-84, Conley missed a floater and Marco Belinelli -- for some inexplicable reason -- decided to push the pace and turned it over. Without that play, probably none of the rest of this would have happened.

- 1:36 to go, the Grizzlies missed a corner three. The Spurs couldn't secure the rebound and stupidly committed a loose-ball foul. Conley makes one of two. 96-85, Spurs.

- 1:10 to go, Mills drove and found Manu, who couldn't hit an open corner three. On the break, Conley attacked Marco, who stupidly fouled him for the and-one. 96-88, Spurs.

- 50 seconds to go, Ayres fumbles a risky Manu pass because he just has terrible, terrible hands.

- 46 seconds to go, Lee scores on the break after some rather appalling San Antonio transition defense. 96-90, Spurs.

- 28.9 left, Belinelli air-balled a three with eight seconds left on the shot clock.

- 20 seconds to go, Conley hit a leaning three because that's the kind of game this was destined to be. 96-93, Spurs.

- 15 seconds to go,  Marco Belinelli crowned what might have been his worst three minutes as a professional athlete by allowing the ball to be stolen from him on a soft trap, resulting in a James Johnson three. Game tied at 96.

- 13 seconds to go, the Spurs ran the pretty backdoor play they so often use for Parker at the end of games, but this time it was Ginobili receiving a perfect pass from Duncan. Spurs up two, 98-96.

- 3 seconds to go, as Kawhi overplayed the three-pointer, Conley received the inbound pass, drove to the rim and shot a crazy running layup that he let go with something like 3 seconds left, but which didn't fall through the hoop until well after the buzzer sounded. (This might be slightly exaggerated.)

Overtime frustrated me beyond measure, because it shouldn't have even happened. Beyond that, it was all about execution, as you can see from the shot chart, courtesy of the Whirlwide Liter: 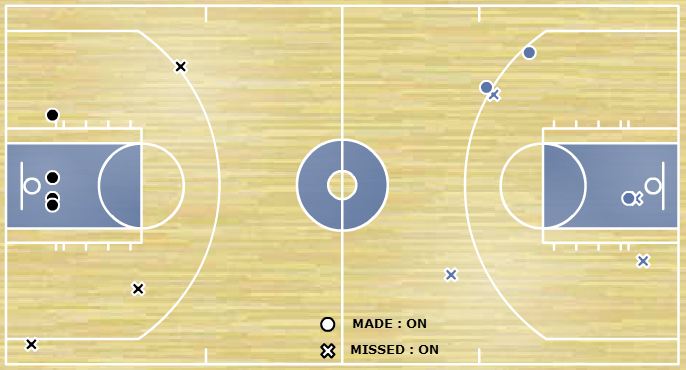 And then this happened.

Yes, Manu scored the game-winning layup after a pretty hesitation move on Ed Davis, and normally I would be all over that but I can't even pretend to be excited because it shouldn't have come to a game-winner. The Spurs played complacent ball for 45 minutes. Then they fell apart down the stretch and barely held it together.

For a surely more optimistic output on the game, visit Grizzly Bear Blues

Credit should go to the Grizzlies. They fought to stay in the game and were nearly rewarded with a win in the end. While it looked to me like the Spurs did what they could to lose the game, the reason it almost slipped away is because Memphis just refused to quit. I have no doubt they will give the rest of the West hell as soon as Marc Gasol returns because, while they might not measure up on talent alone, their leadership and character surely make up for it.