The Spurs took advantage of Chris Paul's absence and routed the Clippers, 116-92.

The Spurs faced the Los Angeles Clippers Saturday night in San Antonio. The Clippers were without Chris Paul and J.J. Redick and the Spurs took advantage. San Antonio jumped on the Clippers early and Los Angeles was unable to recover. It was a very good showing for the Spurs, and I wish Chris Paul had been present because no one can beat the Spurs when they play the way they did tonight and I'm tired of all the "signature win" talk. 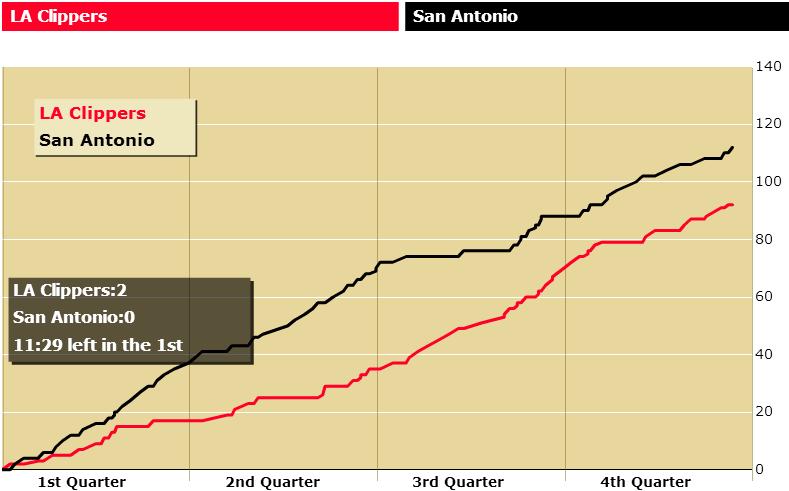 As you can see from the game flow, the Spurs blew it open early and the Clippers were never able to recover. Even though the Spurs definitely allowed things to get interesting at the beginning of the fourth quarter, they recovered and cruised to victory over the Clippers.

Splitter injured his shoulder in the third quarter of last night's game.

There were a number of excellent highlights from the first two quarters of Spurs vs. Clippers, when the home team doubled up the Los Angeles, 70-35. But my favorite might have been this assist from Tim Duncan to Marco Belinelli.

The Spurs starters looked great in the first and finally played as a starting unit should. Before Manu checked into the game, the starters had built a seven-point lead and had very much outplayed the undermanned Clippers starters. The Clips were without Chris Paul, but it's still great to see the Spurs' starters execute and out-perform their opponents.

I think Darren Collison is a worthy backup and this Clippers team is still one to be feared. Basically, I do not want to hear how this win meant nothing since Paul was out. OKC has Reggie Jackson replacing Westbrook and LA has Collison replacing Paul. I think the two backups are comparable and everyone thinks OKC is just fine. Keep in mind that Jackson has had two of his best games in his career against the Spurs. He's not as good as you think. He's had two +20 point games this year and both were against San Antonio.

In the third quarter the Spurs relaxed, which is understandable. They doubled the Clippers at the half, 70-35, and were undoubtedly playing not to lose. Their prevent defense infected their offense and before they knew it, Jamal Crawford caught fire and the lead was down to 13 with nine minutes remaining in the fourth.

At this point, Tiago Splitter went down with a shoulder injury. As he writhed in pain on the floor, Pop subbed in Tim Duncan. Duncan responded to the turbulence as you would expect. He converted an and-one and followed it with an 18-footer to right the ship. The Spurs cruised from there to record their 26th victory of the season. 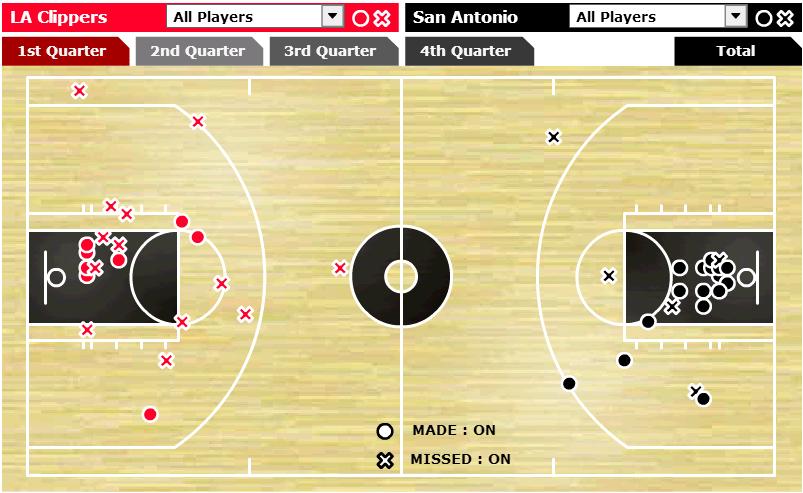