Let's look at some plays from Wednesday night's game. There's even a Tim Duncan alley-oop dunk.

Share All sharing options for: GIF Breakdown: Spurs vs. Bulls

I highly encourage you to read Caleb Saenz's rehash if you haven't, excellent stuff from him as usual.

I think Tony Parker, Tim Duncan, and maybe Pop talked before the game and decided that they were going to get Tim a couple of alley-oops. Watch the Spurs move the ball around the arc and in to Timmy for the easy alley-oop layup without dribbling. I don't think Joakim Noah ever considered this being a possibility. Nando de Colo sets a screen in the paint, and the screen is enough to give Duncan the airspace he needs.

Check this out. The Spurs run the exact same play on the opposite side of the floor in the second half. The ball moves around the arc, no dribble, Marco Belinelli sets the screen this time, Noah falls for it again, and Duncan finishes with the alley-oop dunk. I wonder if Manu drew it up. Pop? Timmy?

I'm not sure that Othyus Jeffers is an NBA caliber player. I'll say this, he's not lacking hustle. Here he fights like crazy for a loose ball he poked away from Carlos Boozer and forces a jump-ball.

Here's a Tony Parker drive against Noah. Noah plays him pretty well, but TP knocks down the Manu-esque step-back jumper. It's really tough to defend that. For all you Patty Mills towel-wave fans, notice "The Slapper."

Look at all of the movement on the court during this play. Chicago does a nice job of sticking with the Spurs, but the Masked Mamba slips through the defense and Cory Joseph finds him with a nice pass for an easy layup. I like this play aesthetically - the motion is wonderful.

Look at the Spicy One follow up his miss with a rebound and a put-back. Marco has his shot blocked by Noah, but fights for the ball and is rewarded with a kind bounce. Belinelli is excellent around the rim - his 63% at the rim is elite. This bunny is no problem. Check out his shot chart following the GIF. 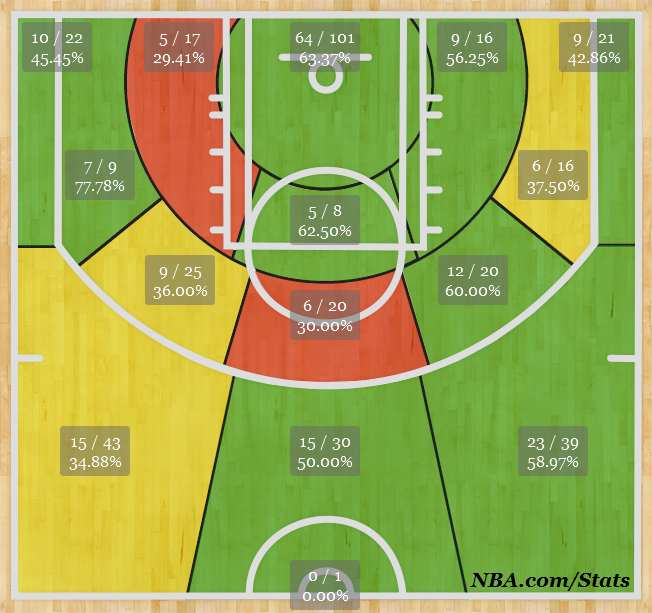 Let's end this Breakdown with a description from JRW:

Every time I see Boris get from somewhere around the three point line all the way to the bucket with nothing but his wits, some crafty dribbling, and the occasional fake -- I think of this passage from one of this season's best posts on Ptr:

And, as he spun, he moved forward towards the rim; forming one oscillation in a sort of ponderous time helix, moving at 20 feet per rotation and one rotation every 5 seconds. After he made his way -- with the ball in geosynchronously wide orbit -- to the hoop, he stopped his spin and his forward momentum.

So this drive didn't feature that "geosynchronously wide orbit" dribble, as DewNo called it, but just about everything else is on display here. There's the initial dribble in a direction that he has no intention of continuing in. There's the behind-the-back dribble spin move that seems too slow to work, but somehow does. There's the sudden stop that leaves his man still retreating, followed by a variation on an up-and-under move followed by an underhand released layup that spins the ball up the back board and gently into the basket.