The good guys continue to roll over lesser competition, despite being down three of their starters.

Whenever the Spurs blow out their opponent it makes writing a recap a little tougher. There's not much to breakdown from the win tonight, and it's Friday night, so let's make this quick and see what else is going on tonight.

AaronStampler hands out his grades in part 2 of his mid-season report card.

In his weekly appearance, PtR editor-in-chief J.R. Wilco goes on the Phil Naessens show where they talk injuries. And boy, the Spurs have quite a few.

The Spurs completely dominated this game. Just a simple glance at a basic box-score would show you much of what you needed to know about this contest. The Spurs shot 49% and held the Hawks to 38%. The Spurs out-rebounded Atlanta 54-36, though I was surprised to see that Atlanta only missed four more shots than the Spurs. It sure felt like a lot more, but I guess those 22 turnovers San Antonio had explains it. The Hawks contributed 20 of their own to the turnover party, and this was a sloppy game at times. Think about this for a second. the Spurs turned the ball over 22 times and won by 26 points.

Last time these teams played, Coach Budenholzer made his first return to the AT&T Center since taking the head job in Atlanta. That game was a thriller that ended with Tim Duncan hitting a game-winning jumper and finishing the night with 23 points and 21 rebounds. Friday night's game wasn't as good as the first one, but Tim Duncan was phenomenal once again.  He finished the game with 17 points, 16 rebounds, and four blocks in just 27 minutes. You guys know how I feel about Tim Duncan. The Ageless One continues to impress.

Speaking of The Ageless One, we have started adding a poll to the game threads. Tonight over half of the respondents came up with the correct answer. 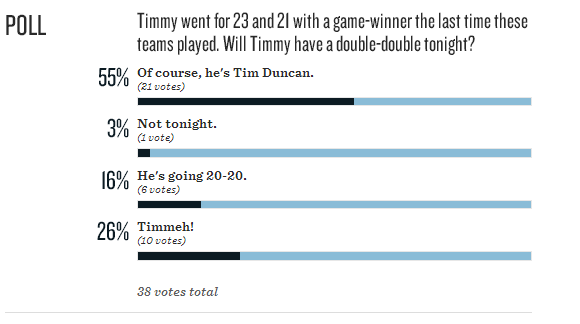 This game was never really in doubt after the first quarter as San Antonio took a 27-14 lead into the second quarter. Nothing much happened happened during the second besides more dominance from the visitors. Boris Diaw went off in the second, scoring 11 in the quarter before adding 10 more in the third quarter during his season-high 21-point performance. The box-score says Boris was 8-for-10 from the field for the night, but he heaved the ball 85-feet as the first quarter ended. So BoBo was really 8-9, and he grabbed five boards, had a couple of assists, a steal, and a block. He also turned the ball over five times, but we can gloss right over that.

The second half of the game didn't provide much in terms of a competitive sporting event, but there was an Othyus Jeffers sighting. The newest Spur scored two points on a tip-in and grabbed two rebounds in his eight garbage-time minutes. Every player in uniform for the Spurs scored tonight. Even Aron Baynes, who went 2-for-10, but must have had five airballs. It was comical to me since the game was already put away, but c'mon Baynes, what was that?

The Spurs went into the fourth quarter leading 84-56, pretty much killing Tim's chance at another 20-20 game. But hey, this is the first game of a three-game road trip and I'm happy with the limited minutes played by everyone involved. The Spurs were able to cruise to the win with a lineup of Cory Joseph, Othyus Jeffers, Nando de Colo, Matt Bonner, and Aron Baynes who stretched the lead to 35 points before going the last two-and-a-half minutes without scoring.

It should be noted that although the Hawks have been the East's 3-seed most of the season, they are very banged up right now. Bud lost his best player in Al Horford for the season, and Demarre Carroll and Pero Antic were both unavailable for this game.

So the Spurs improve to 33-10, a half-game back from the Thunder and a game up on the Blazers in the West.

Check out the Atlanta fan perspective at Peachtree Hoops.

Next up the Spurs have their first rematch with the Heat since the Finals at noon on Sunday. With the current injury woes and Miami playing D Wade every other game or so, this contest doesn't seem like it will tell us much of anything. It's a nationally televised game on ABC. After that, the Spurs get a day's rest and visit the Toyota Center to take on the Rockets. That Tuesday showdown is semi-nationally televised; being broadcast on NBATV