How the Spurs' lack of athleticism hurts their defense

The Spurs boast one of the best defensive numbers in the league, but that doesn't mean they are without weaknesses.

Share All sharing options for: How the Spurs' lack of athleticism hurts their defense

The Spurs have one of the best defenses in the league this year, despite some recent struggles. They still rank 4th in defensive efficiency, largely because they control the defensive glass and don't foul. After a couple of seasons of being a more offensively-driven team, the Spurs returned to their defensive roots last season and it's carried over to this year.

Get news, links and Ziller's #hottakes with Good Morning It's Basketball in your inbox every weekday morning.

Still, that doesn't mean they have no weaknesses, and some are rather worrisome.

The pick-and-roll is still a problem for the Spurs

According to MySynergySport, the Spurs are a middle-of-the-pack team defending both the roll man (14th in the league) and the ball-handler (14th, as well). That's not elite, but it's a huge statistical improvement over the past few seasons when the pick-and-roll was, according to the numbers, absolute poison for them. A closer look, however, shows that the team continues to struggle.

The proof is in the Spurs' putrid ranking when guarding spot-up shooters. San Antonio ranks 21st in the league guarding that type of play and allows the sixth highest three-point shooting percentage in the league. That dreadfulness is directly tied to the often-faulty execution of their pick-and-roll defensive schemes. Just like the Spurs have done in the past, teams are not scoring directly on P&Rs but are using the play to set up open looks for shooters. Here's how:

You surely know this by now. The Spurs very often have the big man drop when defending the pick-and-roll, in order to prevent the ball-handler from getting to the rim and the dive man from getting the ball. They will concede the mid-range jumper, but it's all in service of taking away more efficient shots. When executed properly their strategy is as smart as it sounds.

But the Spurs bigs often drop too far down and the guards struggle fighting through screens, which results in ball-handlers getting to the middle at will and having a lot of room to work with. So to prevent the real threat of penetration, very often a tertiary defender leaves his man to help, which in turn creates open looks for spot-up shooters one pass away.

It is clearly done by design, to slow down the ball-handler or potentially get a steal. But the Spurs don't have the quickness at the wing (except for Kawhi Leonard) to get away with it unless the execution is flawless. That's not the case right now, which means that simply setting a good ball screen is enough to get the Spurs defense scrambling.

Their inconsistency with side pick-and-rolls is an issue

On side pick-and-rolls, the Spurs vary their coverage seemingly at random. Sometimes they play them the same way as all other P&Rs, resulting in the ball-handler getting to the middle. But on occasion they try to ICE the play. I'll let SBNation's Doug Eberhardt explain what that means:

To take the screen away and limit its effectiveness, the on-ball defender will immediately angle themselves on the offensive player's top-side hip. Ideally, by physically attaching himself there, the defender will force the ball handler down the sideline and away from the middle screen. He's dictating where the O can go.

As the top defender herds the ball handler, the screener's man establishes position along the lane parallel to the sideline. Ideally, the big man's bottom foot should be at slight angle up toward the ball handler. The big is "zoned-up," in a perfect help position for his perimeter teammate and close enough to scramble back to his own man to contest a mid-range jump shot.

Here's how it looks when done properly: 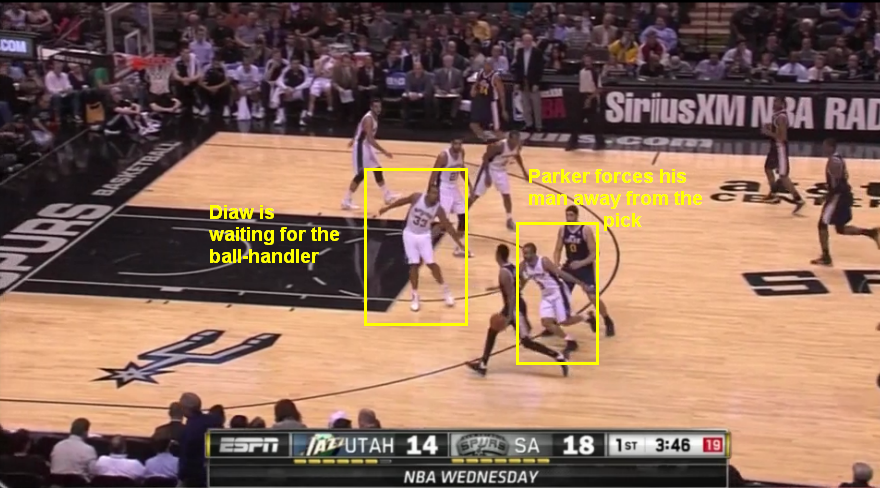 But the same problems that hurt the Spurs in regular P&R coverage afflict them here as well. So if the screener is smart, he will switch the angle of the screen, catching the primary defender and allowing the ball-handler to make his way to the middle with one dribble. From there he can attack the back-pedalling big unless help comes. In that case, he simply kicks the ball out.

Every team is susceptible to this play. But the Spurs' lack of athleticism across the roster multiplies their problems.

The other big issue on side pick-and-rolls is miscommunication between the two defenders involved. Often it just comes down to the guard not angling his body at the right time or the big getting into position a little late. But sometimes the confusion reaches comical levels, like it did here with Splitter and Green:

Against shooting bigs you can't ICE a pick-and-roll because the big man will slip the screen and spot up from behind the arc. Yet Green tries to do just that by shifting his body and apparently Tiago doesn't tell him not to.

That inconsistency on side pick-and-rolls, combined with the discombobulated defense after simple ball screens, puts the Spurs in the tough situation of always being a step behind and having to recover by sending extra help. And that's a problem because...

The wings are too slow to rotate

It's not inherently wrong to bring help on a penetrating ball-handler as long as the players can recover or the rest of the team is disciplined enough to rotate in time. But the Spurs simply don't have the quickness at the wing to get away with over-helping on the ball.

When the Spurs "help the helper", their rotations have to be quick and on point. Otherwise, a good passing team can exploit a double team to create an open look for a shooter. Here is a perfect example against the Blazers:

This play sealed the win for Portland the last time the two teams met. There is no way Belinelli can rotate from one corner to the next in two seconds, especially since he doesn't start moving until it's too late.

The Spurs don't have the athleticism on the wing to get away with helping after ball screens as much as they've been doing so far this season. Only Kawhi Leonard can cover a lot of ground on a very short period of time; Manu and Marco are too slow; and Green makes too many mental mistakes because he seems to overrate his ability to recover.

To make matters worse, the bigs are not all that athletic either, which limits the way the Spurs can cover the pick-and-roll. Pop decided to address this limitation by having the big man drop back, and it worked. Duncan and Splitter are great rim protectors, so most teams either settle for mid-range jumpers or floaters or don't have much success at the rim when they challenge them.

But for that strategy to succeed, the wings need to be able to help on the ball-handler and then recover fast enough to chase the spot up shooter off the three point line and towards the big. So far the Spurs are struggling to do that, which is hurting their defense, especially against teams with multiple outside threats.

Barring a trade, the Spurs' perimeter defense will continue to be athletically-challenged. But the good news is some of the problems they are having on that end come down to execution. I wouldn't be shocked if a couple of months from now the orchestration is much more precise, alleviating the struggles. It will have to be for the Spurs to beat the elite teams in the league because a team can get away with being not athletic or undisciplined, but not both.

Fortunately, there is still time to get the little things right.