Share All sharing options for: Recap: Spurs lose at home to Knicks, 105-101

Well, I suppose it had to happen eventually. The Spurs finally dropped a game to a bad team. Thursday night, the Spurs took on the New York Knicks and the Silver and Black played terribly. The Knicks are not very good at basketball so the Spurs were able to get back in the game and even took the lead in the fourth, but in the end, they earned a loss. It was a frustrating game to watch. The final tally was the Spurs 101, the Knicks 105.

J.R. Wilco discusses the Quenelle and racism with Phil Naessens

Spurs fans have enjoyed many Duncan vs. Garnett battles over the years and more often than not our guy has come out on top. But what happened on New Year's Eve wasn't a battle. It wasn't even a fight. It was just sad.

The starters came out of the gate looking lethargic. They were not hustling to their spots when on offense, and it infected their defense. Each possession felt as if they were trying to milk the shot clock, even though they weren't. If it was not for Marco Belinelli's new role in the starting lineup, I bet the Spurs would have found themselves down by 15 before the second unit checked into the game.

Marco, Manu Ginobili, Patty Mills and Matt Bonner were the only Spurs to have above average games. That's probably all you need to know about how the night went but I'm supposed to fill up this page so I'll elaborate. Marco scored the Spurs' first 10 points, but all it served to do was keep the Spurs in the game since the rest of the starters forgot to show up. For the Knicks, Iman Shumpert, who was averaging 6.2 ppg heading into last night's game, scored 11 in the opening quarter and the Knicks led by one after the first, 26-25.

In the second quarter, the Spurs' superb bench came in and did what they've done all season. They opened the quarter with a 13-3 run and forced the Knicks to stop the action down 38-29. I was hopeful that the bench had cured the Spurs of their lethargy, but the good guys didn't score for the next three minutes and suddenly the Knicks found confidence. Once that happened, the Spurs were in for a battle. 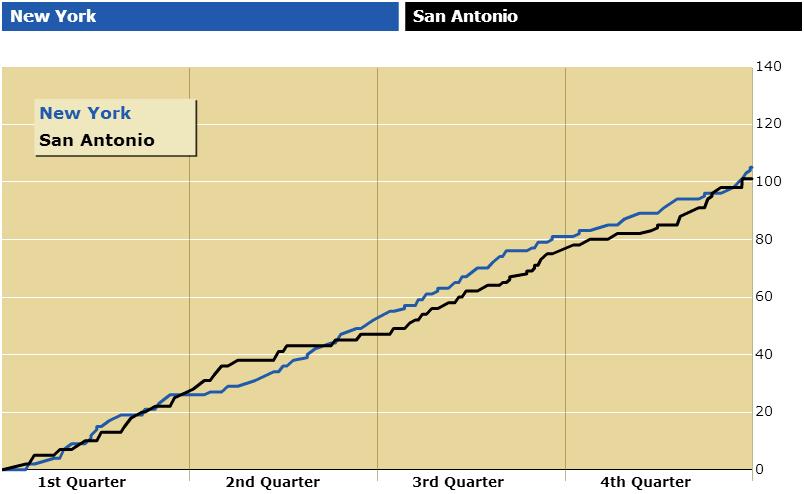 As you can see from the game flow, the third quarter did not go well. The Spurs began it down by five and finished down by six. They never were able to get over the hump in the third. After a Beno Udrih shot, the Spurs were down by 11 with three minutes remaining in the quarter. While Beno didn't have a loud game against his former team, he had an impactful one. He finished with 10 points and seven assists on the night and hit several shots to keep the Spurs at bay.

In the fourth, the Spurs finally began moving with decisiveness, but fell short. They managed to take a two-point lead after two free throws by Kawhi, but Tony missed two shots in a row while Melo converted a layup and Shumpert hit a three to give the Knicks a three point advantage with 39 seconds remaining.

Out of a timeout, Pop drew up a great play that freed Marco beyond the 3-point line for his sixth of the game to tie it at 101. Obviously, the guy who averaged 6.2 ppg for the season, Shumpert, then made a jumper for his 27th point of the night to regain the lead for the Knicks. Marco missed a contested three and that was the ballgame.