The Bucks never had a chance as the Spurs blew it open in the first quarter and never looked back.

Sunday night, the Milwaukee Bucks came to the Alamo City to play the San Antonio Spurs. The Bucks entered the contest with a league-worst record of 7-32. Gregg Popovich chose to give Tony Parker's shin a rest so the Spurs were without Tony, Tiago Splitter, Matt Bonner and Danny Green. Even so, all it took was one good run for the Spurs to get the win. The Spurs went on a 15-0 run in the first quarter, and the Bucks were unable to mount a comeback. 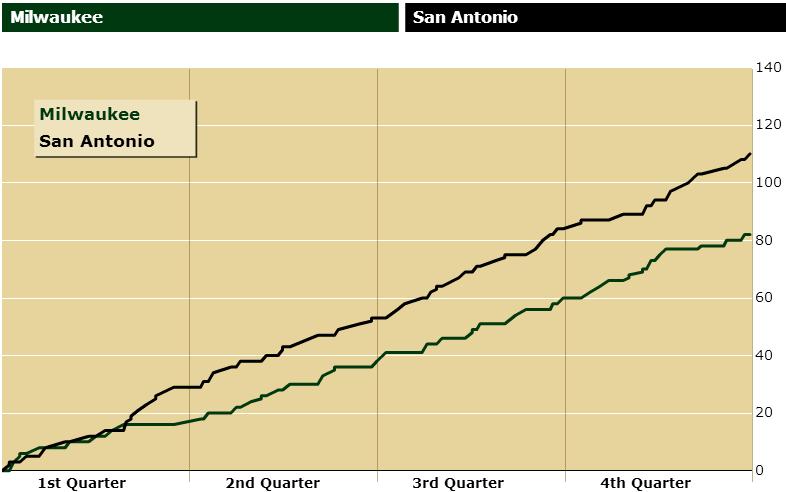 The lineup that pulled away consisted of Patty Mills, Manu Ginobili, Marco Belinelli, Jeff Ayres and Aron Baynes. Patty, Marco and Manu had the Bucks completely flummoxed. Their passing created great looks on the offensive end and at the other, Baynes and Ayres did a great job of defensive rebounding. Regardless of who starts, we need more of Bili MiNelli in our lives. They are so much fun to watch, and even more importantly, they are great at breaking games wide open.

As you can probably tell from the game flow, there wasn't much of a game. The young Bucks were unable to close the gap and the Spurs cruised to a comfortable, 110-82 victory. The Spurs improved to 32-9 while the Bucks fell to 7-33.