Rehash: Cedars falling on the show

Irritants. Headaches. That gritty nuisance that you just can't shake. We all have them but it seems San Antonio had more than its fair share on Friday night.

Share All sharing options for: Rehash: Cedars falling on the show

The sky has been a hazy brown across San Antonio and the Hill Country for the past several days. As a native West Texan, the color in the sky is familiar to me, but this isn't New Mexico sand blowing across the South Plains -- this is pollen, and more specifically cedar pollen, which is making life miserable for hundreds of thousands across Central Texas.

The cedar hasn't been this bad in 13 years and it's irritating as hell, which is a perfect segue to rehash the game against the Portland Trail Blazers.

Gregg Popovich was in a good mood in the hours leading up to the game. He joked and answered questions for over five minutes in the pregame presser which isn't always the case. He came out during the shoot-around, which is even rarer, and sat on the bench for a while, got up and chatted with Tony Parker, obviously making sure he was good to go, and then sat with R.C. Buford before disappearing through the tunnel.

It's limited to the first 250 people who show up, so you might want to camp out in front of the store overnight. Or maybe just get there early tomorrow morning.

Are the Spurs using the right lineups?

The Spurs love using a lot of different lineups instead of settling for a couple that work. But which of the Spurs' favorite five-man units are delivering and which are faltering?

Kawhi Leonard will sign autographs on Saturday Are the Spurs using the right lineups?

Cedar. Your eyes burn and you'll swear you can rub the microscopic cedar splinters out that are blurring your vision if you do it carefully enough.

And what made the strange night even stranger was Tim Duncan's demeanor in the pre-game. He didn't try to shadow box Kawhi Leonard prior to player introductions. He did his layup routine after the captains met at half court, but Sean Elliott was long gone so he wasn't able to shove him off his stool. Even when the lights went down he just seemed to be going through the motions. He won the tip and then jogged to his spot, caught a pass and drained a jumper, but something didn't seem right.

It's almost as if you can feel the cedar slowly falling and settling on your skin. Of course you can't see it, but you know it's there. My four-year-old has been asking to take a hot bath every night and he hates taking a bath. The cedar starts to consume you.

The first quarter was typical Spurs. It was back and forth but they gave you the impression they had the game in control. Even when Boris Diaw was called for a carry after covering 23 feet with one dribble, it still felt like this might be the night for San Antonio to rid the irritant.

Collars are the worst. You feel like if you can just get rid of the collar and get a t-shirt on everything will be ok. The itching feeling is slightly embarrassing but it's ever present. The cedar is winning.

In the second quarter Manu Ginobili had an absolutely sick no-look to Patty Mills for a layup that put the Spurs up 31-27. Still, the irritant wouldn't go away. The referees decided to join in on the "let's annoy the crap out of San Antonio party" which made things worse. No matter what the Spurs did, Portland was there with an answer. Kawhi Leonard makes a nice layup? OK well here you go, we're gonna break Matt Bonner's nose.

You can also feel the cedar in your throat. It's not like the flu - it's just this constant itchy feeling that makes you want to get a rake and rub it up and down on your neck, hard.

It was the third quarter when things came to a head. Portland started the second half with a five-point lead, and increased it to 10 when Pop decided he'd seen enough. Full moons, cedar pollen, LaMarcus Aldridge making every shot and then Boris Diaw just getting absolutely mugged finally pushed Pop over the edge. He walked out on the court as the timeout began with 7:18 to go in the third and yelled at the referee, which isn't out of the ordinary.  But then he kept yelling. And then he yelled at the other referees. Then there was the whole "hold me back Ime or I'm gonna bite a referee" moment when they T'd him up a second time and sent him to the locker room, to massive cheers from the AT&T Center crowd.

Cedar makes your hair itch, especially the back, around the ears. This damn cedar just won't stop irritating. You scratch your head, but it's only a temporary relief.

This was when things got interesting. The crowd was really into it, and Ginobili was absolutely going off, scoring 18 points, including an excruciatingly good layup to end the third where the ball stayed balanced on the rim for six minutes. But the irritating part was that LaMarcus Aldridge had 12 and kept the Trailblazers in the game.

It really does feel like you can feel the tiny embers landing on your face. You'll get a warm washcloth and let your face rest as you slowly wipe across the forehead, then cheeks, and neck and then back again. Unfortunately the relief is only temporary.

The fourth quarter is when the irritants finally caught up and overwhelmed. The Spurs fought to keep the game close, but Aldridge and the Trail Blazers prevailed 109-100.

"Yes I kinda guessed that. He likes us a lot."

Spur of the moment

Despite the fact that Manu tried to pass the ball to the ref for a corner three in the final minutes, he had a fantastic game. 29 points in 25 minutes on 9 of 17 shooting with 4 threes, 7 rebounds and 5 assists.  He had a huge third quarter and kept the Spurs in the game. Sometimes I just try to forget everything else that's going on in the world and just watch Manu and enjoy the moment. 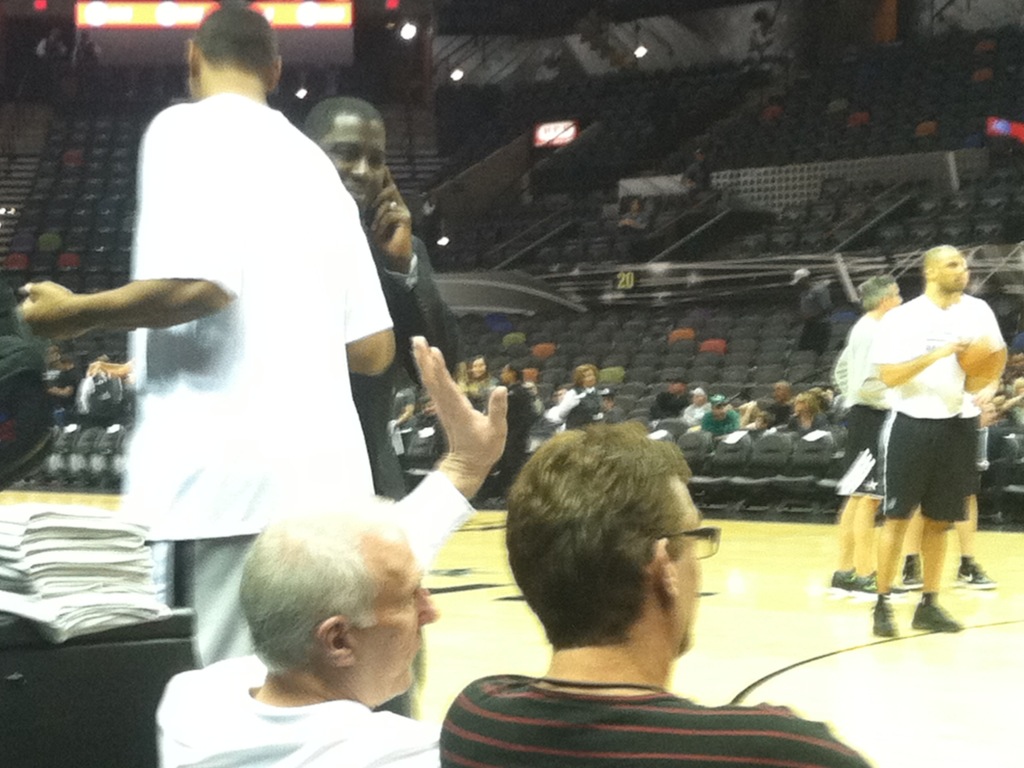 Tweets of the night

Cedar. It will keep you up at night and you're constantly rubbing the Aldridges and referees out of your eyes. It's the tiny, tiny slivers of cedar that irritate the most.

Here's the thing about irritants though: Whether it's cedar pollen, Trail Blazers, referees, or Miley Cyrus, all irritants subside. Cedar and the Trail Blazers beat us tonight, but we'll get up. We'll get up, take a hot bath and be ready for the next battle.

And cedar pollen won't be around in June.