The rules of interviewing Gregg Popovich during a game

As spring approaches all eyes turn to basketball. With that comes the annual descent from media on high to San Antonio to cover the Spurs. With that in mind we've prepared a primer for use in preparations to interview Gregg Popovich.

Share All sharing options for: The rules of interviewing Gregg Popovich during a game

As football season winds down and the NBA season approaches the halfway mark, the nation's sports fans will naturally turn their full attention to basketball. The game lineups on TNT, TBS and ESPN will expand which means Charles Barkley will earn a couple million dollars yelling "GINOBILI!" while making fun of San Antonio and its residents.

In last night's slim victory over the Pelicans, the Spurs had several GIF-worthy plays including a Red Rocket rejection, a Marco 30-footer, and Davis' Timmy impression.

The Pups lost to the Spurs, and failed to move over .500 for the first time in the season. They have also lost all 10 of their games that were within four points. That's not bad luck, it's the mark of a mentally weak, and physically soft team.

Because it is the season for the stars to descend upon us, it would be a good idea for them to spend some time studying film. Of course they will want to be up to speed on the motion plays that free Tony Parker for a shot at the end of the game but they will also need to be prepared for the moment that only a masochist would look forward to. They need to be prepared for the Gregg Popovich in-game interview.

Step inside the film room and let's break down the tape. And if you are in any way less than four degrees separated from J.A. Adande or Doris Burke, please implore them to heed this advice.

It's probably a good idea to rehearse your two questions months in advance.  Don't try to ask a question pertinent to the game at hand because you'll just trip over your words and he will sense that.  He knows you're scared even if he's not standing in front of you. If you're in the building, and you have an ounce of self doubt, he can sense it.  He knows it. And he feeds off of it.

Notice that he's looking down with a slight smirk, but more of a grin. Then the head comes up, slowly. The eyes have a sense of amazement. Then there's the dreaded pat on the back. J.A. tries an awkward smile/laugh, but he knows it's no use. The best bet now is to call it a day and end the interview. He'd probably earn a few fragments of his dignity back, but he trudges on.

The second question is actually slightly better, but no matter, all hope is lost. J.A. is left nodding his head twice as Pop turns and walks away into the night.  Not even a tap on the shoulder as he leaves. It's the worst way to get Popped. It's Don Draper telling Michael Ginsburg in an elevator "I don't ever think about you at all."

If the Spurs committed any turnovers in the quarter preceding your court side interview with Pop, it might be best to just fake the stomach flu and hide out in the bathroom until the game is safely underway again.

Doris Burke tries to artfully confuse us with a flurry of big words as the interview concludes, but the damage is done.

Now this is a tricky one because as you'll see the word "happy" is critical in both of these interviews.  In David Aldridge's case, it completely derails the entire interview.

But for Charles Barkley, happy is ok.

Charles didn't hit a wall until he tried to slip in a 3rd question, which is almost as bad as having to conduct an interview with Pop during the preseason.

Rule Number Four: You get only two

Which leads us to rule number four.  You only get two questions.  Let's break this down with a series of still shots from the Craig Sager interview above. 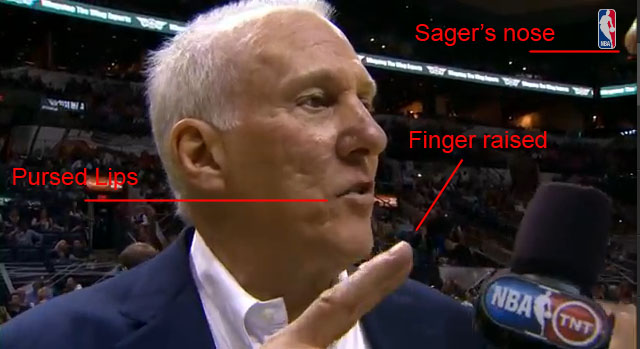 Notice as the finger comes up and the lips purse.  I don't care who you are, you're about to get told. 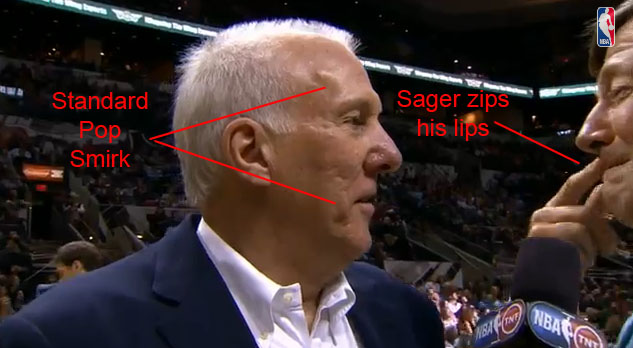 Then it's back to the standard smirk. A sideline reporter that makes a ton of money to interview NBA stars and wear ridiculous suits is reduced to zipping his lips like a 1st grader. 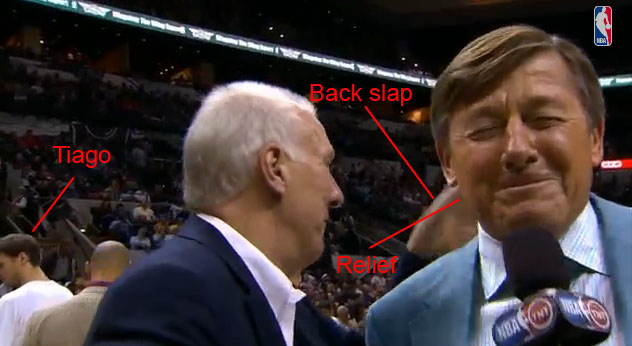 Thankfully for Sager though, he gets the back slap which lets him know that everything is ok as Pop turns to leave. A genuine sense of relief and utter joy can be seen on the man's face as if he fell out of a plane without a parachute and somehow miraculously survived. Also highlighted is Tiago Splitter as a bonus.

So in this film session we've seen a pattern emerge.  If you're new, beware. If you're not a former NBA player or coach, beware. Based on this, it's safe to assume that if the networks have Jeff Van Gundy conduct every interview, then there will never be anything noteworthy to emerge.

Nope. Nothing noteworthy at all. Just your typical, boring interview with the head coach of those boring San Antonio Spurs.