We're heading into week twelve of the Fantasy Basketball season. That means there are just eight weeks left until most leagues hold their playoffs. It's time to shore up the rosters to make your push for the postseason. Here are my hot picks and sleepers for this week.

Guest columnist Phil Naessens of the Phil Naessens Show gives out three must have Fantasy Basketball replacements for Russell Westbrook and Al Horford, and also highlights the Spurs' Patty Mills

Phil's Hot Picks of the Week.

Glen Davis PF Orlando: Davis is an interesting character whose been averaging nearly a double-double over his last 10 games. With four games this week (Dallas, Chicago, Charlotte, Boston) I think he's a good pick-up. Davis is owned in 52.9% of ESPN leagues and 42% of Yahoo leagues, and is a good safe bet this week. (Stats)

Jodie Meeks SG Lakers: Meeks has been on a tear the past five games and as long as he gets to play quality minutes Meeks will be a good addition to any team. Meeks has four games this week (Cleveland, Phoenix, Boston, Toronto) and is owned in 60.8% of ESPN leagues and 44% of Yahoo leagues, so grab him this week and let the good times roll. (Stats)

Iman Shumpert PG SG SF New York: Now that J.R. Smith is in the doghouse, Shumpert has found his groove. Recently he's been lights out from behind the arc, and while that may or may not continue, he's a good pick this week. Shumpert has four games this week (Phoenix, Charlotte, Indiana, Clippers) and is owned in 50% of ESPN leagues and 30% of Yahoo leagues, so give him a shot. (Stats)

Phil's Sleepers of the Week

Randy Foye SG Denver: Two things that I like are a "hot hand" and "available." Both describe Foye. He's been lights out over his last few games, and especially from three point land. Denver has four games this week (Utah, Golden State, Cleveland, Phoenix) and Foye is owned in 14.5%  of ESPN leagues and 46% of Yahoo leagues. Ride the hot hand as long as you can. (Stats)

Ersan Ilyasova SF Milwaukee: Ilyasova has been a Fantasy bust this season, but lately he's showing signs of coming out of his funk, and is providing decent value for owners. The Bucks have four games this week (Toronto, Memphis, Houston, San Antonio) and Ersan is owned in 45% of ESPN leagues and 72% of Yahoo leagues. Maybe Ilyasova can help you down the stretch. (Stats)

Jared Sullinger PF C Boston: Sullinger is a good addition to any Fantasy team when he's healthy . Currently he's healthy, available, and averaging nearly a double double during this recent stretch of good health. Boston has four games this week (Houston, Toronto, Lakers, Orlando) and Jared is owned in 52.6% of ESPN leagues and 40% of Yahoo leagues. If you need a big man give Sullinger a look this week. (Stats)

Spurs players to watch this week

The Spurs have four games on the docket this week (New Orleans, Utah, Portland, Milwaukee) and, depending on the league, there are plenty of opportunities for Spurs players to contribute.

Marco Belinelli SG: Belinelli is explosive and from time to time he can really fill it up as we saw against the Knicks. I would only use him this week in a deeper league, but I would absolutely look to use him as a great value player in daily leagues on Wednesday against Utah and on Sunday against Milwaukee. (Stats)

Boris Diaw PF: Diaw is another one that depending upon the situation can either help you or hurt you. He's only a deep league option but I would look to use him as a value pick in your daily league on Friday against Portland and Sunday against Milwaukee. (Stats)

On today's Phil Naessens Show, Rotowire's Kyle McKeown and I discuss injuries and tons more. Indy Cornrows Managing Editor Tom Lewis and I discuss all things Indiana Pacers, and Welcome to Loud City writer Zeb Benbrook and I discuss the Golden State Warriors. . You can listen below or download the program here.

SavedByTheBellinelli came up big this week by knocking off Duncan Donuts. The rest of this weeks PtR results are below! 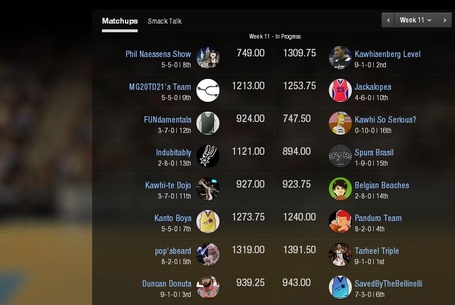