The Spurs are getting better at defending shooting bigs

The Spurs are showing improvement at containing big men that can create offense for themselves through jump shots, as their performance against Dirk Nowitzki shows. But can we expect the same type of success against guys like LaMarcus Aldridge or Kevin Love?

Share All sharing options for: The Spurs are getting better at defending shooting bigs

The Spurs have always had trouble with pick-and-pop bigs. While Tiago Splitter and Boris Diaw seem to have the ability to do a solid job containing that play, the Spurs just don't emphasize mid-range defense. It's a weakness but as far as weaknesses go, it's not too bad. I've finally made my peace with it.

What's the story on Jeff Ayres?

Do you ever wonder why Pop is giving minutes to a guy who has so much trouble just catching the ball?

PtR readers will be able to buy a discounted ticket for the game on January 22nd versus the Thunder, get passes to enter the arena early to watch the teams warm up, and you'll receive a special Spurs t-shirt.

But while allowing assisted mid-range jumpers from role players to deter penetration makes sense, there are some shooting bigs whose offensive skills demand especial treatment. Dirk Nowitzki is the first name that comes to mind but Kevin Love and LaMarcus Aldridge are not far behind. Even three point shooting specialist like Channing Frye should be defended differently.

The Spurs shut down Dirk Nowitzki on Wednesday. That big German thorn in the Spurs' side could only manage eight points on 13 shots, largely thanks to the work of Boris Diaw. But is that performance by both Boris and the team a sign that they are ready to defend elite shooting bigs well or was it a mirage? Let's look at what the Spurs did right against the Mavs and see if it is sustainable.

Boris Diaw is legitimately a great defender against shooting bigs. Diaw used his quickness, strength and discipline to consistently prevent Dirk from getting to his spots. BoBo worked extremely hard trying to deny position in the post:

He navigated through screens well and when Nowitzki tried to face up on him and create separation off the dribble, Diaw moved his feet:

It was legitimately a great performance for Diaw.

Mostly, yes. He will obviously always need help against the truly great shooting bigs, just like anyone else would. But Diaw is showing very real and impressive skills that make him a very good defender against that type of player. His lack of length is a bit problematic but he uses other tools to make up for it. There's not a lot anyone can do when a seven footer hits tough fade away jumpers but Diaw should have more success than most on post ups and his discipline makes him a good fit for the Spurs pick-and-roll schemes against elite shooting bigs. Speaking of which...

Look at how the Spurs defend the pick-and-roll when Blair sets the screen: 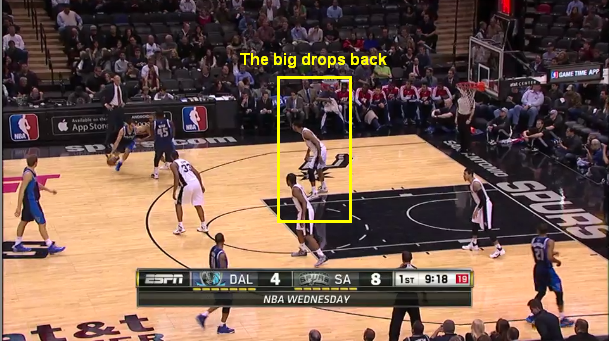 This is how they defend it when Dirk does: 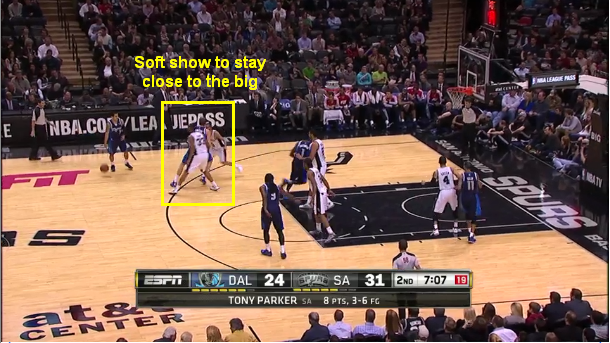 Instead of dropping back, the secondary defender shows and immediately recovers. If the Spurs were to use their usual schemes against someone like Dirk, they would get killed. Instead they have Diaw use his quickness to do a soft show and recover, limiting the amount of time Nowitzki was open to a fraction of a second.

The downside was that the strategy freed the ball-handlers to attack off the bounce. But with Duncan down there protecting the rim, the Spurs managed to limit the effectiveness of those penetrations, mostly forcing either mid-range jumpers or runners.

It depends on the match up. As mentioned, the downside is the ball-handler gets room to attack. Against guys that are not a threat to score, it's a fantastic strategy. It worked great against the Wolves when the teams last met, for example, because the Spurs could go under the screen on Rubio.

Even if he could get past that defender, the Spaniard is not a good finisher.

But against aggressive and offensively talented guards, it could be problematic. The smallest mistake will result in an open shot, as this play from Eric Bledsoe exemplifies:

J.J. Barea was the Mavs' answer to this type of coverage in the past, hitting outside shots when the defense went under the pick and attacking the rim when it went over. Had the Wolves used him instead of Rubio last time around, maybe things wouldn't have gone quite as smoothly.

It's still a good way to defend those bigs that can score on pick and pops from three but it will put more pressure on the big protecting the rim or the other perimeter players, who will have to rotate on time.

Asides from Diaw, the player that should get the most credit for Dirk's quiet night is Kawhi Leonard. The Big Island is so long and fast that he can cover a tremendous amount of ground on defense. That makes him a terror for post players because he can double team and go back to his man or rotate with ease. He also has fast hands so the opponent has to always be attentive or he will get his pocket picked.

The Spurs used him to either double Dirk or at least threaten to double him, which resulted in the German having less room to work on or getting rid of the ball altogether.

That made Diaw's job much easier. Other Spurs also do soft doubling in the post but no one is as effective at taking the opponent off his rhythm as Leonard is.

Not really. Leonard does have an uncanny knack for knowing when to help and his quickness allows him to get back to his man on time. Against post bigs, his secondary help is as important as what the primary defender does. The problem is he has to be in the position to provide that help and smart teams with multiple shooting threats will prevent that.

The Blazers, for example, used whoever Parker was guarding to make the entry pass to Aldridge, as all their perimeter guys can hit the three. That put Parker in the position to provide help for the post defender and he just wasn't particularly successful. You need a guy that has good enough hands to be a threat to get the steal and is long enough to make it hard to pass off the double team and quick enough to recover. Only Leonard and maybe a fully healthy Manu Ginobili have that combination of skills for the Spurs.

The combination of Boris Diaw, the Spurs pick-and-roll schemes and Kawhi Leonard as a help defender allowed the Spurs to contain Nowitzki. But the great work they did seemed to be aided by the Mavs' weaknesses and a combination of factors the Spurs can't really control. So I wouldn't get particularly giddy about the Spurs' ability to shut down elite shooting bigs just yet.

It's still great to see they have a plan, though. The upcoming game against the Wolves should give us a chance to see if there are any more wrinkles to it or if the Spurs can perfect their execution of it to a point where it doesn't really matter what the other team tries to do. With more and more teams using their shooting bigs as a weapon, the Spurs will need their D to be able to contain that threat in the playoffs. And despite not being quite there yet, they seem to be on their way to finding an answer.