An open letter to Adam Silver

On February 1st, Adam Silver will replace David Stern as commissioner of the NBA. This seems like a good time for an avid NBA fan to deliver a few words of advice to the new league boss and show him how to make his first year in power really count.

Share All sharing options for: An open letter to Adam Silver

After the 2012-2013 season ended, Wes Thorne wrote a very different kind of letter to our beloved Timmeh. If you missed it, do yourself a favor and check it out now.

What's up, Commissioner Silver? That sounds good doesn't it? Commissioner Adam Silver. Go ahead and let that simmer. I'm sure it feels good to take the helm, and you deserve it after all the work you've done to get here (which, I'm assuming, is more than emceeing the second round of the NBA Draft).

You aren't officially commissioner yet but, as ESPN reported, the NBA board of governors will officially give you the keys to the magic kingdom in February. It's a big job, and all eyes will be on you early on to see how you handle it.

But this isn't a Machiavellian letter filled with devious and quasi-legal ways to keep the throne. In fact, holding onto this position should be as easy as simply not rocking the boat. Being the head of one of the most popular sports leagues in the world might sound like a position of power but, truth be told, the power in the NBA rests in the hands of the owners -- and all they'll want is a clean transition and a maintaining of the status quo: 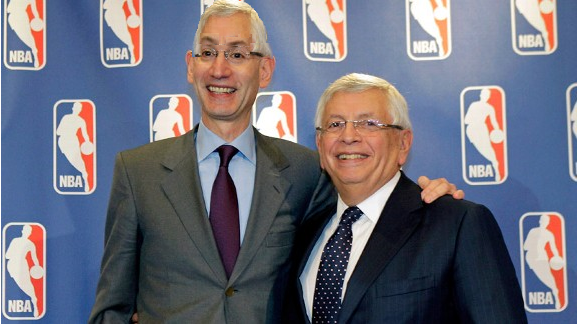 NBA owners are rich because of the way things are, so why would they want to risk disrupting the cash flow? Stern knew this. He was the boss of the league for three decades, during which he approved an owner's requests to move their team, renamed a couple of trophies, and changed the dress code. He basically lived 364 days out of the year inside an alabaster fortress only to come out on draft day to a roar of boos from a crowd of angry New Yorkers. Don't be that guy.

Sure you could become a carbon copy of Stern, keep the cash flowing into the owners' pockets, and help usher in a new era of NBA fashion that will inevitably result in some poor child wearing a snug, sleeved Lakers shirsey that reads "Swaggy P". Or you could become something more.

I say take this as an opportunity to light the status quo on fire and laugh as a bunch of greedy business tycoons scramble to recover what remains in the ashes. Here's an itinerary for your first and only year in office, guaranteed to transform you from "the guy who followed David Stern"  to " the greatest commissioner of all time".

It's important to set the tone right from the start. You are aiming to be a revolutionary commissioner and it doesn't get more revolutionary than making the NBA the first major sports league to feature women playing alongside men (no, mixed doubles tennis doesn't count). Quite frankly, when guys like Richard Jefferson are getting serious minutes it seems only logical that women like Silvia Fowles and Brittney Griner can too. It's time to give women the chance to show to the world that they can play basketball at the highest level.

Start with the All-Star Game. I know the Shooting Stars competition includes WNBA players, but why not have a few in the main event, a game which has long lost its pizzazz? Bringing in some of the elite women's players would not only spice up the ASG, but could help make those athletes bigger household names and promote the WNBA brand, as well.

There's going to be loads of ignorant media backlash, and the entire experiment could potentially fail. But there is a high enough of a chance for success to validate this move. If it works then you are going to be hailed as the man who changed the face of sports.

Tanking is ugly. It is a festering sore on the sport. If a team is not in reach of the playoffs then they engage in a race for being the worst team in the league. This is because the worst team has a higher chance of getting the first pick of the draft. There are all sorts of theories about how to end tanking. With all due respect to Zach Lowe there is only one solution, and it can be found across the Atlantic Ocean.

In European soccer leagues, the worst teams are demoted to a lower league and the best teams from that lower league are promoted to the big show. It is called relegation, and it makes almost every game relevant. If the Utah Jazz faced expulsion to the D-League, then they would not be giving Richard Jefferson 36 minutes a game. (If you're wondering what I have against Richard Jefferson, then you should know that I'm a Spurs fan.)  If you relegate teams then you need a league to relegate them to. Enter a reconstructed D-League with teams from cities that deserve an NBA franchise. (Here's looking at you, Seattle.) The draft would be a bit tricky. Ideally the D-League teams plus the recently relegated NBA teams would pick in the second round and the top four promoted teams would receive the top four first-round picks. The best team of the D-League would not only play in the NBA but would be rewarded with the number one pick. It is a way to reward successful teams instead of rewarding teams that are straight up nauseating to watch.

NBA fans are a polarized group. Most people root for a certain team, and say all sorts of bad things to supporters of other teams. However they are all first and foremost fans of basketball. It is hard to recognize this commonality. Enter referee Joey Crawford, a misunderstood genius. With each blow of the whistle he single-handedly tries to destroy the game of basketball. It is a pity that his retirement is looming because he gives us a priceless gift: Joey Crawford brings us together. Take the NBA Finals as an example. They were as divisive as it gets. Even yours truly was calling it a battle of good versus evil. Heat fans (not to be confused with fan heaters ) were equably as inclined to speak in grandiose terms like it was some kind of war.

4th order of business: Cut the schedule in half

The NBA schedule is insane. It's not uncommon for a team to play a regular-season game, jump on a plane, travel across the United States, and play another game not twenty-four hours after playing the last one. Teams typically play four physically intensive regular-season games in one week. Is it really a mystery why so many of the NBA's most prolific players are sitting on the sidelines because of injuries?

Your soon-to-be predecessor and Gregg Popovich recently got into a heated argument over resting star players. It was essentially a debate over what was more important – money or the well-being of athletes. If you cut the schedule in half then this debate is abruptly over. Plus the likelihood that the game's biggest stars will be fully healthy for the postseason increases ten-fold. We love the NBA regular season. Love it. But we like the playoffs more.

Because of the absence of Derrick Rose and other players, one half of the 2014 playoff bracket is practically already filled in. If the regular season was fifty percent shorter, the playoffs would be more unpredictable and, hence, more exciting, instead of the inevitable Pacers-Heat Eastern Conference Finals clash. So not only would the health of the athletes who play the game be improved but the NBA postseason would be infinitely more compelling.

5th, and final, order of business: Name Rasheed Wallace as your successor.

This is where you drop the mic and throw the deuces.