Why Aron Baynes will be next year's garbage-time hero

Aron Baynes played just 20 games last year, including the postseason. In limited time, the Aussie showed that his physical, big-effort style of play is just what the Spurs need to close out wins and keep fans cheering to the final moments.

Share All sharing options for: Why Aron Baynes will be next year's garbage-time hero

Almost everything about Aron Baynes' game is unconventional, including the start to his NBA career. At times last season, Baynes looked like a flat out beast, and others, well, it was pretty ugly. Say what you will about Baynes, but his Game 4 performance against Dwight Howard and his Summer League work are among the many reasons that definitely warrant him some minutes off the bench for the Spurs.

There's no reason to give Baynes - or any player - a solid role if he can't consistently provide something the team lacks. Thankfully, Aron Baynes brings a special skill set that should have him on the floor (at the very least) at the end of double-digit games.

First off, Baynes definitely has some semblance of potential on the offensive end. In Summer League games (albeit against lesser competition), Baynes has shown that he has a few solid post moves and jumpers that he can make when called upon. He's no premier offensive threat, but the Spurs don't need that anyway. All they need is for Baynes to make open dunks and set good screens, which isn't asking for anything that he can't give.

Another answer is that Baynes has the kind of aggressiveness some think TIAGO SPLITTAH lacks. I think, Baynes gained a smidgen of notoriety across the league with his Game 4 defense against Dwight Howard. Let's compare Tiago, Duncan, and Baynes' defensive highlights on Dwight in the Spurs' Game 4, nail-in-the-coffin victory of the Lakers:

As you see above, Dwight never gets good positioning in the post because Baynes keeps moving and pushing him around. This is supposed to be a post-up play for Howard, but Baynes is pressuring him too much. The Lakers are forced to go with their secondary option and Darius Morris is forced to pass to Pau Gasol at the perimeter. He turns the ball over a few seconds later. And again:

Notice how far Baynes pushes Dwight out. When Howard is able to get good post position, he has a few spin moves and hooks he can use to score. But he can't get much done from this far out, and Dwight is forced to pass out to Earl Clark who turns it over seconds later.

Look how far Dwight pushes Duncan into the post. While Howard can't make sense of what to do against the active, aggressive Baynes, Duncan is less active (it WAS the 4th game of a first series sweep, after all) and Howard is able to get a good feel of how he should post up. This leads to an easy layup in both cases for Howard. 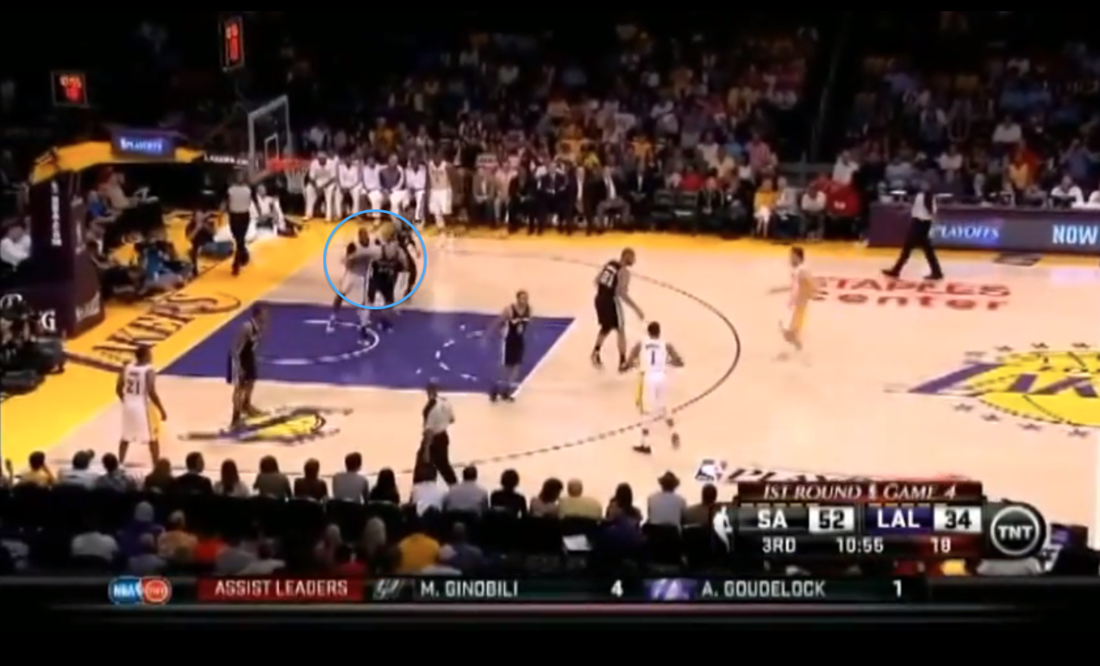 When Howard gets deep in the post, he can usually overpower his defender and get a pass for an easy dunk. Baynes is a tank, and he doesn't let that happen. Howard doesn't make any progress for a few more seconds, he gets frustrated and is called for an offensive foul. 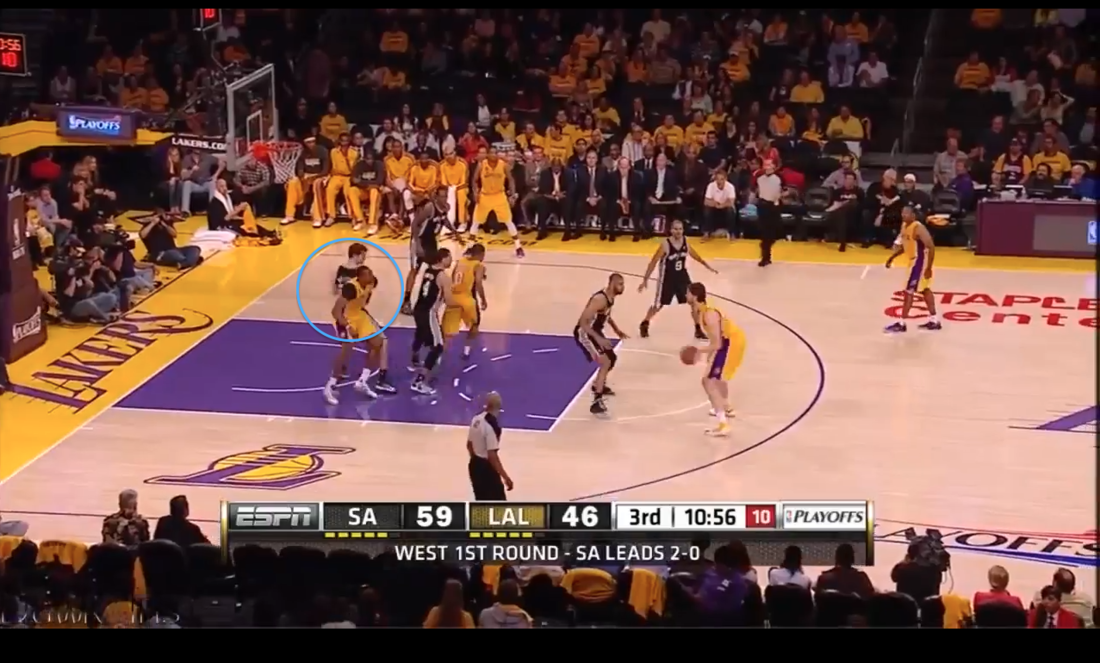 See the difference here. While Dwight couldn't push Baynes out of the way, Tiago isn't big enough to front Howard deep in the post. This play leads to an easy and-one.

Aside from his aggressiveness on the defensive end, Baynes is also able to defend out on the perimeter occasionally. At this point of Duncan's career, he's competent in defending in the post but finds it difficult to stretch out to the three point line. Baynes show his ability to do both.

Shelvin Mack is a fairly quick guard, but Baynes is able to easily stay with him. Creating some separation from Baynes with a little stepback, Mack seems to have an open look. Baynes quickly recovers and uses all of his length to block the shot. Seldom do you see a big man make a block like that out on the perimeter.

But what is so unique about Baynes is his ability to get into players' heads. Few players can do so, and when they do, they often manage to get into their own heads (Exhibits A and B). Baynes' physical gifts and ability to bully people around in the paint tend to create a frustrating experience for his opponents.

Notice how the Clippers are down by 32. Matt Barnes likely wants nothing to do with this game anymore, and then he is greeted with a 254-pound screen right to his face. He pushes Baynes away in clear frustration, and the refs miss an obvious technical foul.

This time, the refs don't miss the call. It can't be understated how physical a player Baynes is, and Howard faced Baynes' full wrath on this play. What makes this play is the fact that Baynes isn't doing anything illegal or dirty. He's simply doing a good job of fronting Howard, and Dwight disintegrates. Howard is steaming with rage, until he is rewarded with his second technical foul of the game, and he's ejected.

Every bench unit needs a hustle guy, that Rock-of-Gibraltar-type that can take on the losing team's mounting frustrations and keep his cool. A guy who brings effort to the closing seconds, and who can keep the fans cheering to the last whistle. Aron Baynes is that guy. He won't consistently provide 20-10 nights (probably not even 10-5). He won't dominate the boards. But he's the guy that every other fan base wants to see punched in the mouth.

And it's been a while since San Antonio has had a guy like that on the roster.