Why was last season's Finals basically a coin-flip series? Simple. Because both teams were basically the '95-96 Chicago Bulls.

Share All sharing options for: What last year's Spurs have in common with Michael Jordan's best team

In a column that I found mostly provocative and insightful, PSherman42 came up with some interesting ways we could use PER going forward, figuring out a way to stop us from dismissing the stat completely. Instead, it can be used in combination with usage rate and plus/minus to get an idea about which fellas can truly ball and which would be better off plying their wares in China or Charlotte, whichever is more appealing for them. It was, on the whole, a really good column that I suggest you check it out.

The ticket deal launches on September 25, and includes early entrance to watch pre-game warmups, and getting on the court after the game to shoot a free throw.

However, his column had a section that I didn't particularly care for or find all that relevant. He ended his post with a look into the correlation between winning percentage and point differential. As you might guess, they're closely related, and after crunching the numbers the correlation coefficient PSherman came up with was .971, or roughly what Tim Duncan's field goal percentage would be if I were guarding him.

As I commented in the thread, I don't find the stat all that relevant because neither of the past season's Finals participants, the Spurs or the Heat, spent much of the season at all concerned about blowing the opposition out. The Heat, in the grand tradition of the Shaq-Kobe Lakers, were a classic "light-switch" team all season long. They were so much more talented than their opponents on a nightly basis, especially in the Eastern Conference, that they regularly seemed to take the first three quarters off every other night, before roaring back to close wins when they chose to. It was a pattern that persisted even in the playoffs, where the Spurs and Pacers both pushed the Heat to the brink and even the Bulls beat them on the road without Derrick Rose and Luol Deng in Game 1 of their second round series. For whatever reason, they couldn't get sufficiently motivated to try their best unless they were being pushed hard by the opponent. The fact that they couldn't even find the "appropriate fear" to respect their opponents or the motivation of being professional competitors, even in a playoff environment, is precisely one of the many reasons most NBA fans root for the team to receive their comeuppance on the big stage. It almost happened, but well, you know.

As for the squad nearer and dearer to our hearts, the Spurs, the topic of regular season point differential was even more meaningless due to how many games their four best players missed during the season -- Duncan missed 13 and Kawhi Leonard, 24 -- either through legitimate injury or because they were being rested by Gregg Popovich. How was it possible for us to know how good the "real" Spurs were if they played so few games together? The roster was completely healthy for just 29 regular season games.

Nate Silver, a statistician who rose to prominence for correctly predicting the results for all 50 states in the most recent political election, recently left his job with the New York Times to start a Grantland-for-nerds of sorts for ESPN.com.

(Incidentally, Jason Whitlock, another hire, told Bill Simmons that he will start, and I'm using his words here, a "black Grantland," which is the kind of thing that makes me sad for America, but that's a topic for another day.)

Anyway, one of Silver's last efforts for the Times was this column, on his blog, which he penned during the Finals, where he attempted to calculate the true level of the Spurs and the Heat, using the per-minute totals their respective coaches were giving the players during the postseason games.

San Antonio did not perform especially well in even-strength matchups during the regular season, going 13-14 in these games. However, under their coach, Gregg Popovich, the Spurs take the notion of timing their players’ performances to the extreme, resting their veteran stars whenever they can during the regular season to preserve their fitness for the playoffs – even at the price of drawing fines from the N.B.A. commissioner, David Stern. 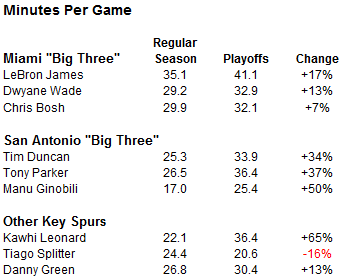 If you didn't follow that, Silver concluded that any stats based on minute-per-game figures for Duncan, Parker, Ginobili, et al, are faulty in that they're tabulated based on the games they participated in, rather than the full 82 game season. Under Silver's method, Duncan's 30.1 mpg in the regular season is converted to 25.3 mpg, because that was his true average availability during the season, due to the number of regular season games he missed. Similarly, Parker's 32.9 mpg gets shifted to 26.5, Leonard's 31.2 gets chopped to 22.1 and Ginobili's already low 23.2 mpg gets reduced to a miniscule 17.0.

How much better? Well, according to Silver -- by way of Hollinger -- about 14 wins better. So they were actually a 72-10 wolf hiding in 58-24 sheep's clothing last season. Granted, this article was written after Game 3 of the Finals, and as you well know the Spurs did lose three of their final four games, which probably knocks their overall ratings somewhat, but the larger point still stands: The Spurs' A-game is better than just about anybody's A-game, and certainly a proverbial coin-flip with the 2013 Heat also at their best, which is what the Finals showed.

Assuming you buy into Silver's methodology, which you have every right not to if you choose, it might seem surprising or revelatory that the 2012-13 Spurs (and, I suspect, the 2011-12 Spurs as well, once they traded for Diaw and Jackson) were a historically good ballclub when they played their peak lineups, right there with Jordan's Bulls or the Chamberlain-West Lakers. I mean, we knew they were good, but that good?

The starting lineup in particular, with Danny Green and Tiago Splitter, was simply dominant defensively in their limited sample size, every bit as much as the more famed (and rightly so, given their larger minute samples) starting fives of the Memphis Grizzlies and Indiana Pacers. Ginobili too helps quite a bit, in his impeccable way, especially when he gets to play with good players alongside him instead of the flotsam and jetsam from the bottom of the Spurs roster.

One fellow whom I suspect agreed with Silver's analysis, at least in spirit even though it's a mortal lock he's never read the article or even heard of its conclusion, is Popovich. The catch-22 he fights every night is how much to play his best players in a given game versus the cost of not having them available, at their absolute best, when it truly matters. The calculus he has to perform on a nightly basis is the kind of thing that would make Silver, Will Hunting and John Nash cry themselves to sleep, and one of those guys isn't even a real person.

Not only does Pop have to steer the ship so that his stars all get to late April healthy, but he has to play them enough so that the team wins enough games to make the playoffs (no easy task in the West) and also so that they attain enough experience and chemistry playing together to be dangerous in the playoffs. Sure, he could push them all to their limit, hellbent on winning home court advantage throughout the postseason (h/t to Tom Thibodeau), but the injury risk to one or more of the four would be like 99.8 percent. Determining the point of diminishing returns is the hardest part of Pop's job, and it's why he earns every cent of his considerable salary.

The downside of being conservative, of course, is precisely what we saw happen. He puts his stellar team in the position of having to beat Miami four times in six tries in a Final, because winning a road Game 7 is practically impossible. Basically, Pop gambled (and will do so again this season) that home court in the Finals won't be necessary to win it all. And that compromise is the lesser of two evils, a far more likely proposition than trying to push his team to a 69-13 record.

All in all, our team was a monster and figures to be one next season too, unless the wheels completely fall off for Duncan or Ginobili. Once again, they figure to be a hidden monster, and while the national media will have some blame for that, it won't be because the Spurs are "boring" or "they refuse to give access." The real culprit is they'll be hiding in plain sight, on the bench or in street clothes, rather than on the floor. It's up to us avoid lazy, short-term conclusions. Forget the win-loss records and the point differentials, there's only so much meaning we can cull from data when it contains unhealthy portions of Diaw, Matt Bonner and Cory Joseph.