The Italian guard is mostly known for his shooting but while leading his national team at Eurobasket, he is proving he can create out of the type of plays that only Manu could run for the Spurs in the past

Share All sharing options for: Belinelli's play at Eurobasket is eerily reminiscent to Ginobili's with the Spurs

Marco Belinelli was the Spurs biggest off-season addition, and it hardly registered around a league that was busy with the Dwightmare. Belinelli was coming off a good season with the Bulls, but there have always been questions about his consistency as a scorer and his defensive limitations make him anything but a sure thing. After watching him fill the Manu role for Italy at Eurobasket, however, I feel more comfortable with Marco as an upgrade over Neal, and I even think those comparisons to Manu are not so silly, at least when it comes to playmaking. Take a look.

Belinelli can create off the pick and roll

Passing to the corner

Here is a simple high pick and roll action, the type we've seen the Spurs utilize a million times. The big man sets a screen and rolls hard to the basket. Belinelli uses the screen and the threat of his shooting forces the big man to step out, leaving the defender in the corner to rotate to the rolling big. 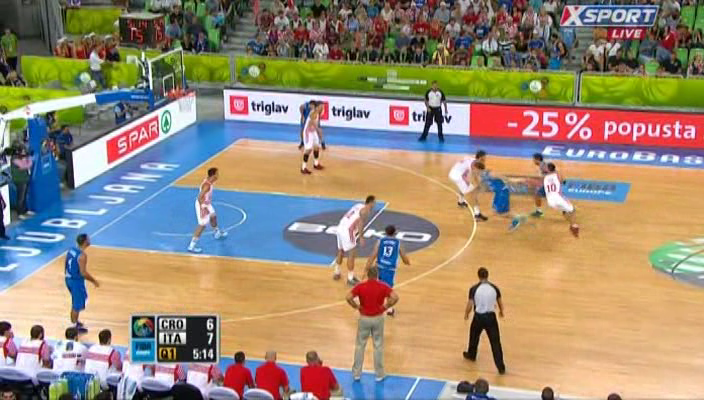 Belinelli makes a read and sees Aradori in the corner all alone. From there, he can shoot or drive. This simple play often confounded Gary Neal, and the rest of the guards just didn't command as much attention as shooters to make the big man commit. 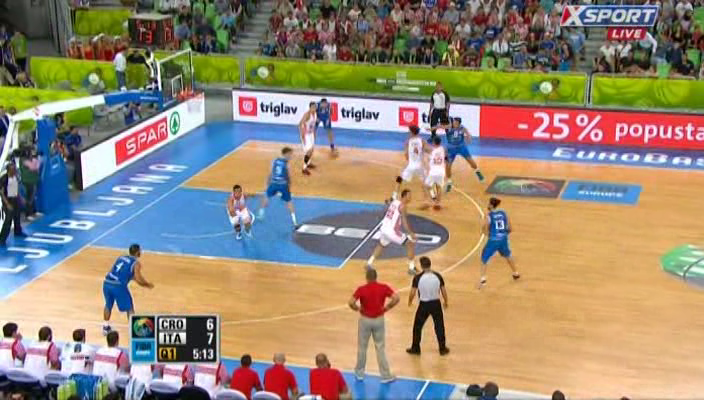 Here's another play, this one against Spain.

A blurry Marco gets the ball after a screen by Vitali, who will go to the weak side corner. 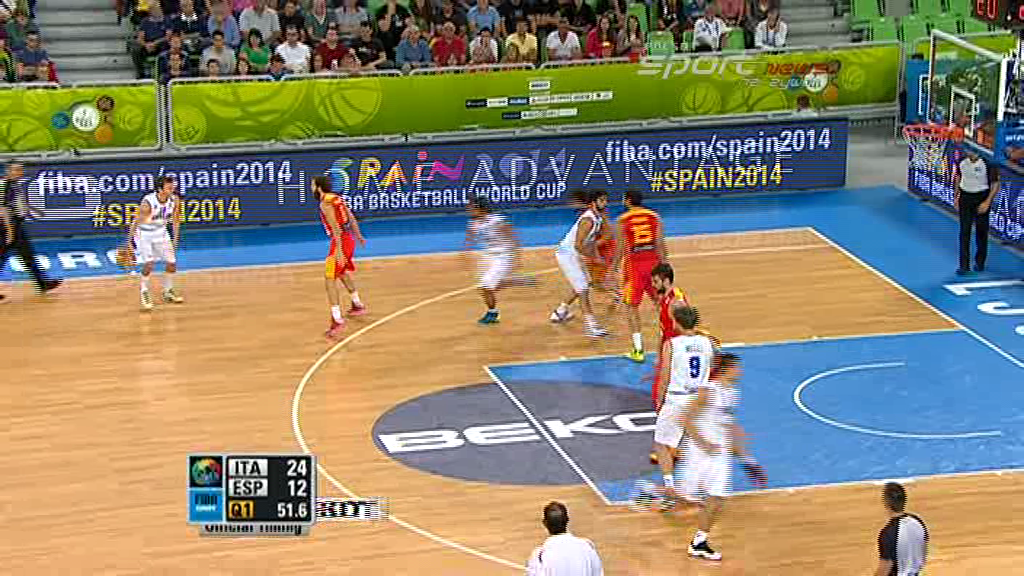 The big man sets a screen and Gasol is forced to hedge to contain Belinelli, as Sergio Llul tries to recover. Since Italian big man Melli can shoot from outside, Sergio Rodriguez has to be ready to help on a potential pick and pop. 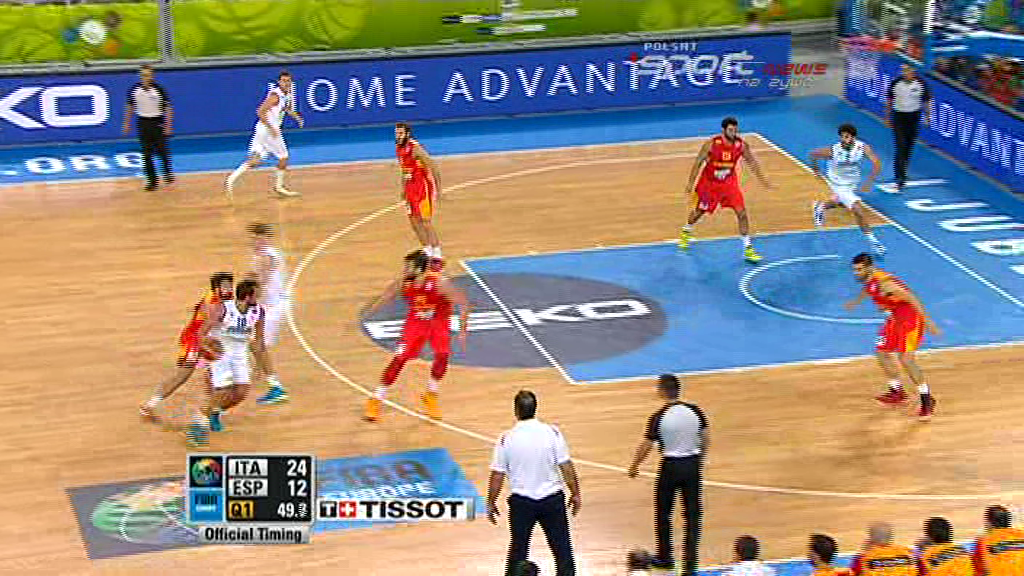 Belinelli correctly reads that Rodriguez will help and passes to Travis Diener, who is alone in the corner cutting to the basket. 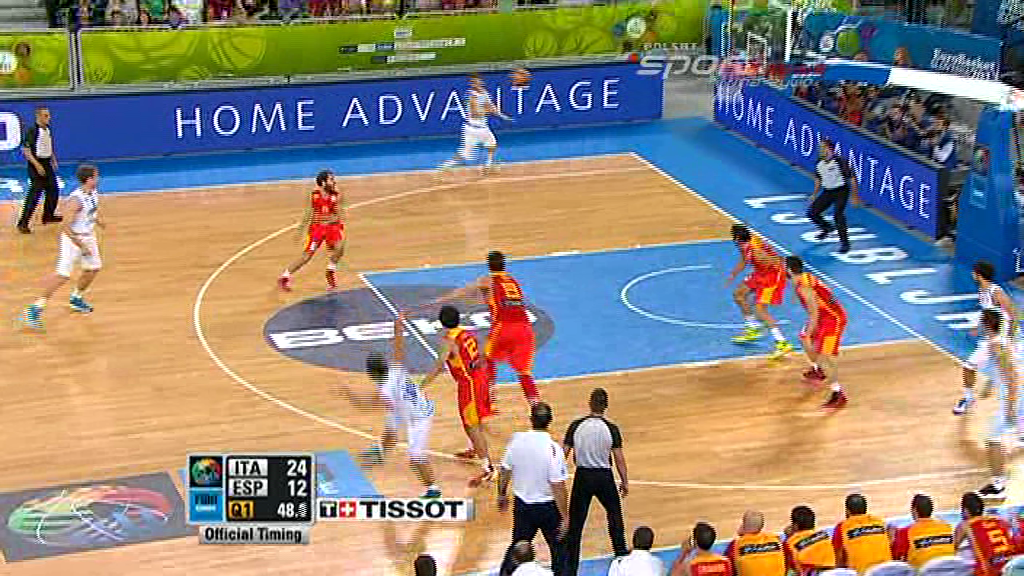 Passing to the roll man

Marco curls from the corner using screens and receives the ball to start a high pick and roll. 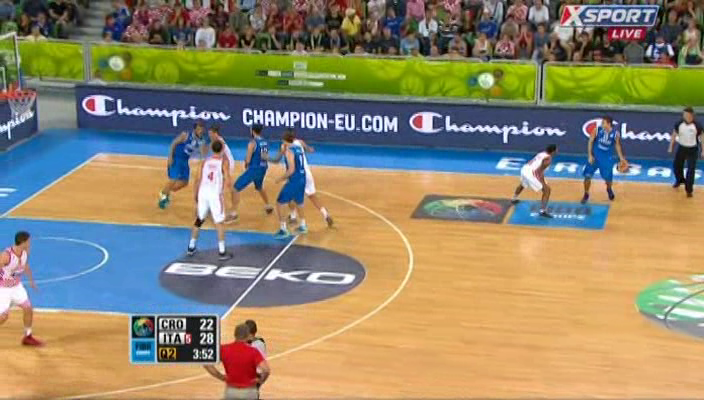 The screen is set and Marco goes to his strong hand. Once again, the big man has to hedge hard to prevent Marco from either turning the corner or pulling up. 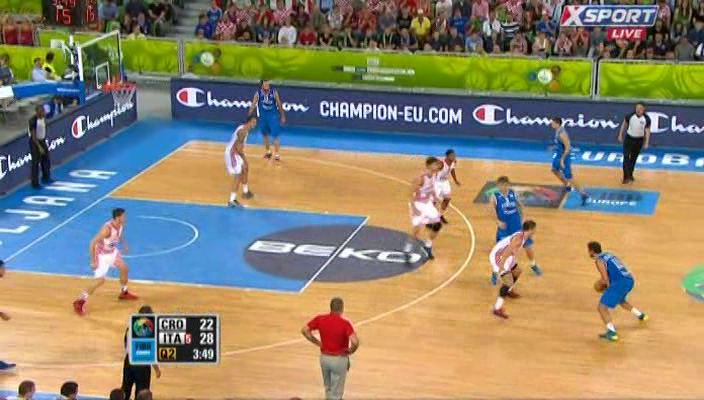 With the big man helping outside, the defender on the weak side corner is tasked with guarding the roll man and the corner shooter. As he cheats instead of committing to the big man, Belinelli hits his roller for a dunk. 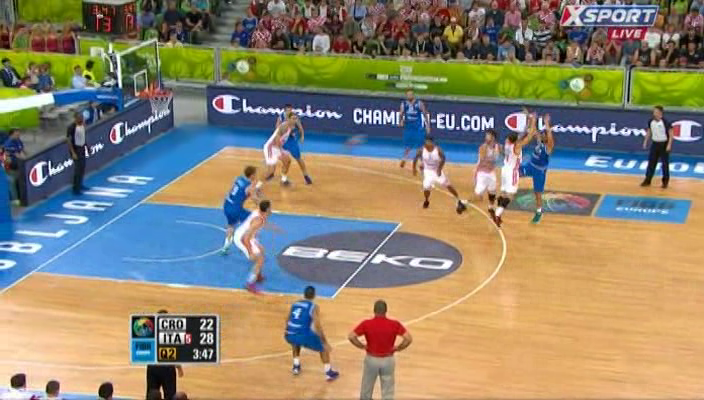 Those two plays are classic read-and-react pick-and-roll action, the type the Spurs rely on Ginobili almost exclusively to execute. Marco is trusted to be Italy's main pick and roll ball handler and he really excels in that role.

Belinelli will come in with some familiarity with the Spurs' system

Boris Diaw had an easier time adjusting to the Spurs' offense than most, and that was partially because he had familiarity with some of the sets, as the French national team used similar ones. The exact same is happening with Belinelli and team Italy. The above plays are right in the Spurs' wheelhouse, but this next one is pretty much the exact same play the Spurs ran a few times in the Finals, but with Belinelli in Ginobili's place.

Belinelli cuts from one corner to the other and receives a hand-off while the other three Italian players are along the arc. 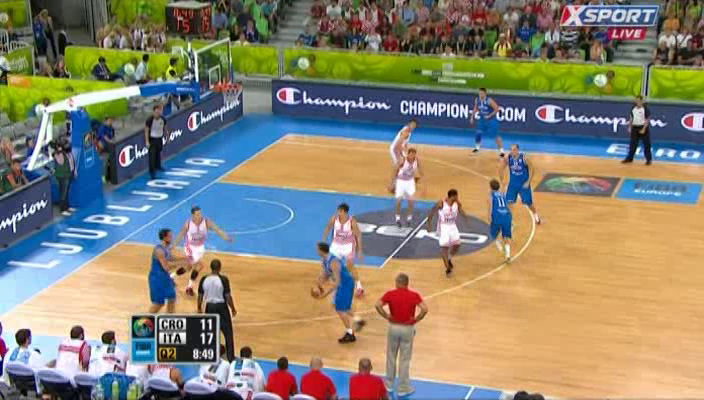 His defender is trailing after the hand-off and now there is another screen coming. It's impossible for the original defender to catch up and once again, Belinelli can pull off the dribble if no one guards him closely. 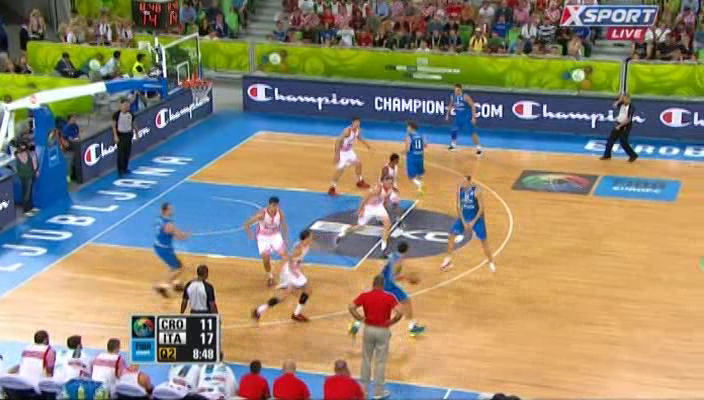 The big man has no choice but to step outside to contest a potential shot while Marco's original defender desperately tries to recover. The Italian big Cusin is rolling and one defender is tasked with guarding two players. Marco decides to pass to the corner here, but he could have hit the rolling big if the corner defender didn't commit. 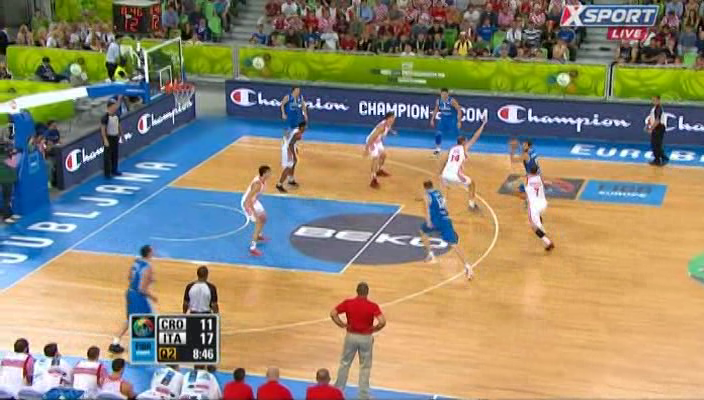 Belinelli is used to running sets that are extremely similar to the ones the Spurs run. It's not just that he can create in the pick and roll -- he can create in exactly the type of situations the Spur will ask him to. These were mostly set plays that Italy runs to find the open man, but they are not clear cut, simple pick and roll sets but ones with read and react options. Team Italy is trusting Belinelli, just like the Spurs trust Manu, to decide between those options and most of the time he makes the right call.

For years now, Manu Ginobili has been the only playmaker on the Spurs roster that could actually execute those type of plays. George Hill and Gary Neal didn't have the creativity or the court vision to pull them off and T.J. Ford was not a threat to shoot. That forced Ginobili to often have to shoulder the playmaking burden all alone, lest the offense stagnate. With Belinelli in tow, Manu can now alternate between being the ball handler on those great plays the Spurs run or benefiting from the space they create as a spot up shooter and cutter. Just imagine how much more effective Ginobili could be attacking a defender that is coming at him to contest after rotating instead of having to try to blow past him off the dribble.

As redundant as Belinelli's skill set might seem at first glance with Ginobili still on the roster, the fact that they are both versatile enough to be able to play on the ball and off makes them a deadly match, at least on paper. The Spurs might have not addressed their biggest perceived weakness by getting a back up SF, and there will be things to figure out on defense, where finding a way to remain effective with both Manu and Marco on the court at the same time could prove challenging. But I can't help but be excited about what Marco could bring to the Spurs from a scoring and playmaking stand point. The potential that his play could enhance Manu's is just an added bonus.