Fun With Stats: examining PER with usage rate and plus/minus

This time on Fun With Stats, we are still playing with the oft-maligned PER, but this time in conjunction with a couple of other stats that allow us to see PER in a bit of a different light.

Share All sharing options for: Fun With Stats: examining PER with usage rate and plus/minus

We're getting late in the NBA offseason, and out of boredom, let's say that you wanted to list the top 25 players. There are the obvious choices in LeBron James and Kevin Durant, but with the retirement of the White Mamba, you will likely find that creating this list is much harder than you imagined. So you decide to look at stats, like PER, to help finish your list. "Oh wow," you say, "how could I forget Carmelo Anthony, Kyrie Irving, and, of course, JaVale McGee - wait what?!" Yes, JaVale McGee (THIS GUY) was a top 25 player in PER last year. What the what?

Last month, I wrote an article analyzing the PER statistic (player efficiency-rating) and how well/poorly it reflected player value. PER doesn't account for a player's defense capabilities or his usage rate (which could either benefit or harm his numbers), so it doesn't really paint an accurate picture of a player's performance or his actual contributions to his team.

The total individual plus/minus point differential is another stat that is often criticized by basketball fans because the number fails to isolate the actual value of a specific player. Both statistics unquestionably have their flaws, but both PER and (team and individual) plus/minus differential can yield some reliable performance indicators when analyzed in tandem with other statistics. So let's explore those possibilities.

PER vs Usage rate among Spurs players

I mentioned in my last analysis that an increase in usage rate can impact a player's PER either positively or negatively, but that it seems that in order to have a high PER, a player also needs to have a high usage rate. I tested the theory and came up with this graph comparing PER and usage rate for the Spurs' players last season:

The r2 value shown at the top left corner of the chart is the coefficient of determination, which measures how well the data points fit a linear model -- thus the diagonal line on the chart around which most of these data points cluster. The correlation coefficient, r, with this data is .721. Which a chart like this one here, reveals as a strong correlation (p << .0005) between PER and usage rate.

What this means is that for all but four Spurs, usage and PER are tightly related: high usage yields high PER, and vice versa. Keep in mind that a player doesn't necessarily have a fantastic PER just because he has a high usage rate, it's just that the two are closely interdependent. The four data points that stick out on this graph are Gary Neal, Stephen Jackson, Kawhi Leonard, and Tiago Splitter. For them, their PER and how often they're used don't scale quite as well.

Neal and Jackson had decent usage rates, but PERs that fall way below the linear regression line. If you look at how PER is calculated, it's obvious why their PERs are terrible. Here's the simplified equation from Bleacher Report that I used in the last article and you can click on the chart to enlarge it.

Since Kawhi is about an average player in terms of PER, I included him to set a reference point. Blue boxes represent the best of the three, yellow is second best, and red is the worst. Look at Neal and Jackson's numbers; their stats were dreadful for PER last season. Neal could produce only threes and points on a consistent basis, and everything else was mediocre at best.

Speaking of consistency, Jackson was one of the best in the league at consistently missing open looks and turning the ball over, in what was easily one of the worst seasons of basketball performed by an individual player that I've seen. His PER of eight shows just how bad he was.

To make matters worse, neither player was really good enough defensively to make their numbers irrelevant in the way a guy like Thabo Sefolosha (career PER of 10.9) does. It's not hard seeing why they are no longer with the team and a case could be made that their loss is actually addition by subtraction.

Splitter and Leonard and some encouraging signs

According to John Hollinger's reference guide, Kawhi is a slightly better than average NBA player. As mentioned, that's not really true, as PER doesn't capture so much of what Kawhi does for the Spurs. Something similar happens with Splitter, who saw his PER drop by almost two full points last season. But if you complement their player efficiency rating with their usage rate and put their numbers in context with the rest of the Spurs' roster, their PER actually looks quite impressive.

Leonard and Splitter have low usage rates (16.4% and 18.2% respectively), but both finished the season with PERs well above the linear regression line -- that diagonal on the first chart -- which means that their PERs were much better than their teammates with respect to usage rate. Kawhi and Splitter's seasons last year were almost the complete opposite of Jackson's: they were able to maintain decent PERs despite low usage rates because they produced well in almost every factor accounted for in calculating PER. And since both are above average defensive players, it's difficult to overstate just how good they were in their roles last season.

Complementing plus/minus differential with PER

I mentioned above that one of the biggest knocks on plus/minus is that it struggles to isolate individual player value. This is the situation we'd see if I took the floor with Duncan, Leonard, Parker and Splitter. They're awesome and I'm not, so collinearity would allow me to ride the coattails of my more talented teammates into a great plus/minus differential without really doing much while on the court. RAPM (regularized adjusted plus/minus) and especially xRAPM (a new adjusted plus minus model that includes box score stats) were designed to help isolate a player's value, but I thought of another way. Check out this chart of PER vs. plus/minus differential for the 2012-13 Spurs' roster: 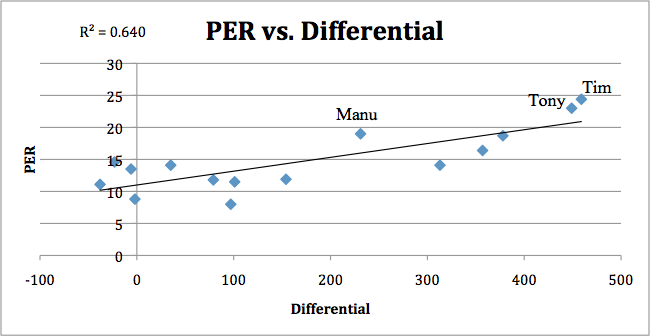 Using the same method as earlier, the correlation coefficient is r = .800, suggesting a strong correlation (p << .0005) between PER and plus/minus differential on the Spurs last season. Any data point above the regression line essentially means that the player is doing most of the work when he's on the floor, and isn't getting more help from the rest of his teammates than he gives.

Ignoring the bench-warmers (Mills, Baynes, Joseph, Blair, and De Colo) on the left side, five of the 10 Spurs' main players are actually well below the linear regression line. And the three names above the line, are just who you'd expect, the Big Three. It obviously makes sense to see them above the regression line, since they are the primary shot creators/makers for the Spurs. It's especially interesting that Ginobili, despite not having a great season by any means, ranks well here. The downside is that it seems that last season, the Spurs were as dependent on the Big Three as ever.

To finish, I thought it would be interesting to check the correlation between team plus/minus differential (or margin of victory) and winning percentage. There were a couple of fascinating outliers. 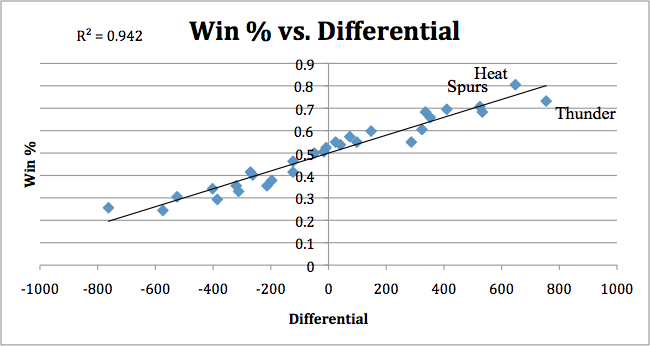 First off, the correlation coefficient is a ridiculously high r = .971, which is indicative of an extremely strong correlation (p ≈ 0). This should seem pretty intuitive; if you have a really high differential, you should be winning most of your games and vice versa. Most of the middle and lower tier teams essentially stand on the regression line but something interesting happens right at the top.

The Oklahoma City Thunder is the team with the highest point differential and they beat out the second highest team (the Miami Heat) by 106 points for the season. The Thunder are far below the regression line, which indicates that they are blowing out teams in most of their wins and losing games by small margins. Basketball Reference shows that the Thunder won by an average of 15.2 points and lost by an average seven points. As we saw with the Warriors in the 2013 playoffs, young teams have a tough time closing out winnable games, and the numbers suggest this might be happening with the Thunder and the not-so-clutch Durant.

The Heat had the highest winning percentage last season, yet they actually had a relatively low margin of victory compared to the trend of the rest of the NBA. This could mean a lot of things, but when you look at the Heat's splits, you find that they actually win (12.2 points) and lose (9.8 points) by similar margins. Neither of these differentials is particularly close, so this means that the Heat either blow out or get blown out fairly equally. Even in the Finals, the Heat won their games by an average of 11.25 points and lost to the Spurs by an average of 16.67 points.