With most teams using a big man almost exclusively for defensive purposes, a player's ability to affect the game on that end has gained even more value. The best of these bigs can also contribute in reduced roles on offense by being efficient instead of prolific. Let's try to find the best of the bunch.

Not long ago, I decided to take a look at the best 3-and-D role players in the league and rank them. After finishing that project, I thought it would be interesting to zoom in on the big man equivalent of the 3-and-D wing: the low usage, high efficiency defensive big man. Most teams right now have a forward or center who devotes most of his energy to the defensive end. When they score, they do it efficiently, but they won't get as many shots as their more offensively gifted teammates. That's my case study here.

I started out by looking for players who had a below 20% usage percentage, boasted a true shooting percentage of over 50% and were on the court for at least 15 minutes a game. To weed out perimeter players I included in my filter a total rebound percentage of above 15%. This is what came back. It seems like a good place to start. I made my cut off point 1,000 minutes played for the season and eliminated Al Farouq Aminu, as he usually plays at the wing. I had 27 names so to make it an even 30 I added Kendrick Perkins, JaVale McGee and Robin Lopez, as they seemed to fit the label.

Ranking them by offensive ability

The four aspects I thought best represented the offensive side of this type of player were offensive rebounding, team offensive rating differential with the player on the court versus off the court, true shooting percentage and free throw attempts per 48 minutes. True shooting percentage would tell me who scored efficiently while offensive rebound percentage would allow me to see who gave his team extra possessions. Offensive rating differential would tell me who hurt his team on offense when on the court. And I included free throw attempts to highlight the interior scorers that also have the increasingly rare skill of getting to the line. I awarded 15 points to the first ranked, 14,5 to the second ranked and so on until the last one ranked received 0,5 points. Here are the results: (Click to enlarge) 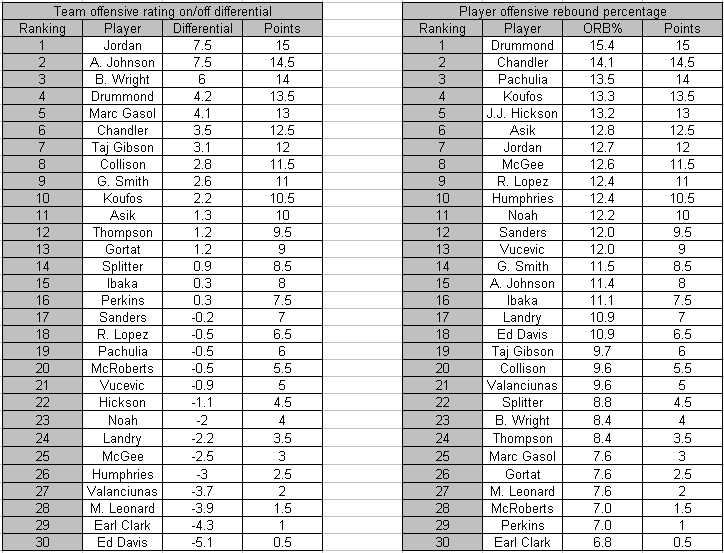 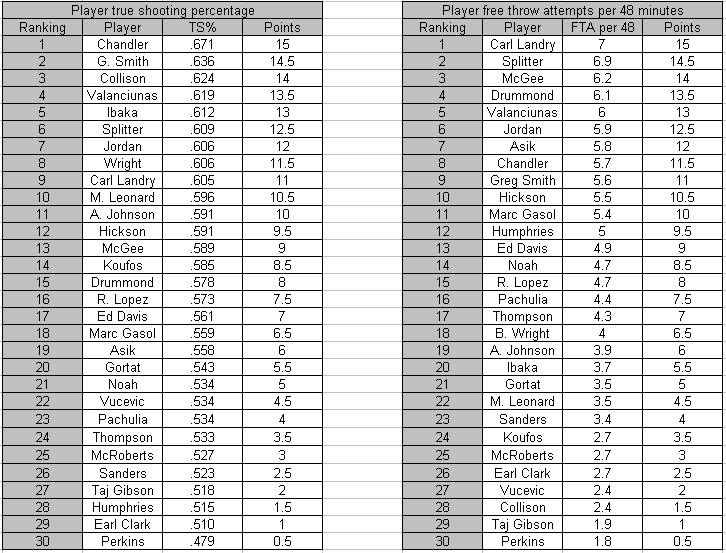 The part on offense is necessary to really paint an accurate picture of the type of player I'm intending to rank, but it's not nearly as important as the defensive portion.

Defense is always tricky to measure so I wanted to cast as wide a net as possible. I used a number of metrics to rank these players in an attempt to figure out who excels in what areas and ultimately who is the most complete defensive player.

The idea was to see who were the best individual rebounders of the bunch in a way that didn't exclude the team part of it. The player's defensive rebound percentage number will tell us who pulls down a big share of the available rebounds while the differential will show if the player's individual rebounding is in fact integral to the team's success on the glass. (Click to enlarge) 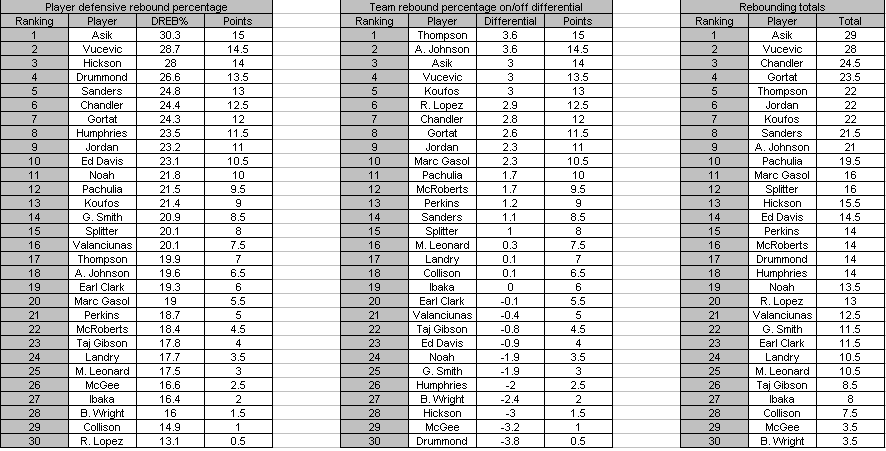 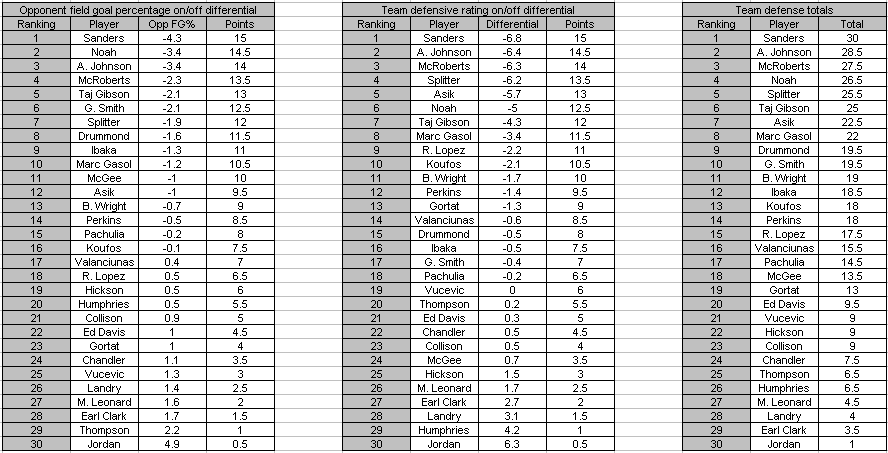 You've probably seen these stats used in this article focusing on "bark vs. bite," i.e. who deters penetration and who forces misses, or in Kirk Goldsberry's article on the "Dwight Effect."

The idea here is the same: figure out who helps his team deter shots close to the rim when he is on the court and who makes opponents miss. (Click to enlarge) 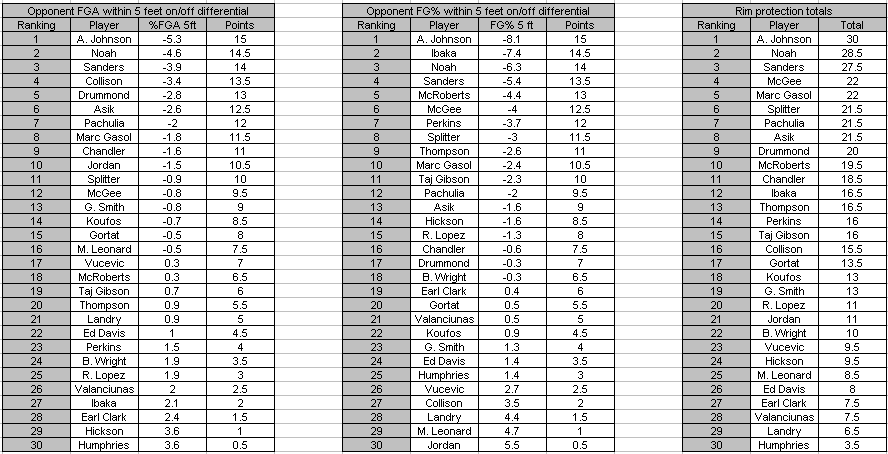 Steals and blocks per 48 minutes and points per possession allowed

We all know that getting big block or steal numbers doesn't equate to playing good defense, but disrupting the opponent's offense does have value. I used MySynergySports to track points per possessions allowed, which helped me identify who excelled on plays they were directly involved with. (Click to enlarge) 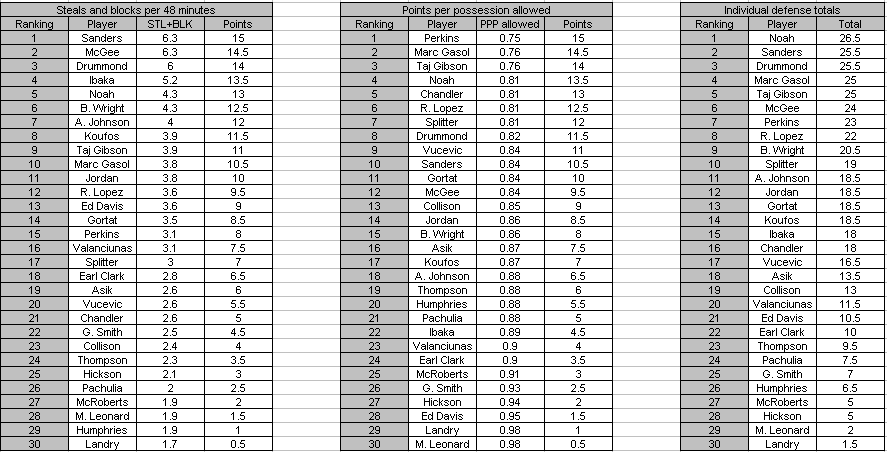 Now that I had both the offensive and defensive parts of the equation, I only needed to combine them and have a ranking of low usage, high efficiency defensive big men. Let's see who reigns supreme. (Click to enlarge) 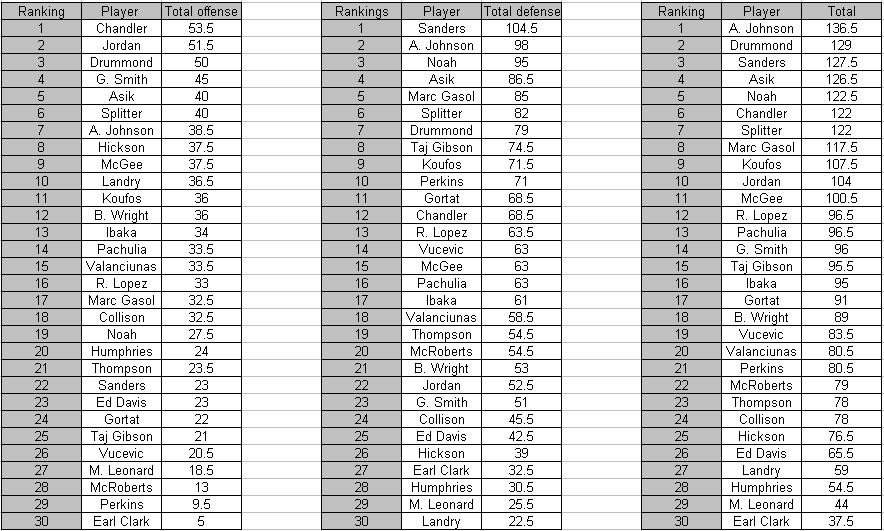 Like I mentioned in the 3-and-D article, this is not an academic study. I simply chose the stats I thought represented the type of player I was trying to rank but there are obviously aspects I failed to cover. The points system is also a bit too simplistic.

This is only meant to rank players in terms of value as a high efficiency defensive big man. Carl Landry, for example, creates offense for himself and has a mid-range jumper. Those are valuable tools that I just didn't consider here.

Stats courtesy of The NBA Geek, MySynergySports, Basketball-Reference and NBA.com/Stats