A return to All-Star form for Deron Williams will mean a top-3 finish for Brooklyn in the Eastern Conference.

The materialization of star-player conglomerations has become prevalent in the NBA over the last decade. And while it's not as glamorous a group of in-their-prime athletes as we saw in Boston in 2008 or Miami in 2010, what's happening in Brooklyn is another example and employment of a concept that has produced a lot of success.

But the name-power and historical relevance of some of the players involved carry a level of respect not associated with the typical upper-30s NBA trade pieces. This team has gotten older, but depth and experience will play a huge role for a franchise expecting to win big right now.

Prediction: The Nets will set a franchise record for wins (non-ABA) in top-3 Eastern Conference finish; Deron Williams will lead the NBA in assists per game and return to All-Star form. 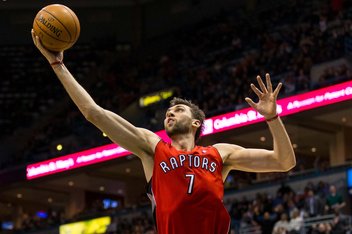 The first installment of the 30-part series -- a prediction on the Knicks' first season with Andrea Bargnani.

Making an off-the-wall prediction is tricky with the Nets because Mikhail Prokhorov did everything within his means to make sure every base was covered with talent and depth. And when I say "means," I'm certainly not talking in the financial sense. If there was no cap on spending, Prokhorov teams would place second to none in terms of competitiveness. If the NBA operated in a world without a collective bargaining agreement in place, there's no telling what shenanigans the multibillionaire czar of precious metals would prove capable of concocting.

Before we address the prediction, let's dive into NBA finance 101 and put some perspective on Prokhorov's feelings about the American dollar. As has been well-documented over the last two years, the new penalties for taxpayers are set to show their most tangible effects this season, and the ramifications of exceeding the luxury threshold are quite heavy.

This from Larry Coon's FAQ on the new luxury tax implications:

The idea behind implementing the harsher tax penalties is to prevent the NBA's biggest markets from blatant overspending at a cost that was previously well within their means. But with Prokhorov, spending money is a matter of no consequence.

Brooklyn is set to pay more than $102 million in payroll for the Nets to play basketball this season, and that's not even close to counting the cost of luxury tax payments; and as a repeater, no less. Based on new rules in place for repeat tax-payers (and my calculations), the Nets are set to pay more than $115 million in tax alone, bringing their total bill to nearly $220 million for the 2013-14 season.

For comparison's sake: Philadelphia's current roster cost is less than $45 million. Total. (They'll have to pay a surcharge at the end of the season if they don't hit the ~$52.8 million salary floor as dictated by the CBA — a small price to pay in order to go "'Wack' for Wiggins.")

With all that money spent, you'd expect nothing less than title contention for the Nets, and that's hardly an unrealistic notion. It might take some good fortune along the way, but it's rare that any championship comes without a little luck.

Now, they're likely and most accurately described as 'fringe contenders,' with the established elite teams of the NBA — Miami, San Antonio, Oklahoma City and potentially even Indiana and Chicago — very much still in the picture; but the collection of talent in place gives Brooklyn the deepest team in the franchise's history. There are six current and former All-Stars on this roster and another former Sixth Man of the Year in Jason Terry. The Nets are stacked, but optimism must come with a bit of caution.

There's a natural tendency to romanticize when it comes to the future Hall-of-Famers we've watched lead franchises for years on end. And we should be able to, but only if we do so with necessary perspective.

Last year's Lakers entered the 2012-13 season with extreme hype, no doubt emanating from the combination of offseason acquisitions and the typical Lakers hoopla. But there were red flags all over the place if you were able to scan the horizon with an objective eye.

Steve Nash, a 39-year-old high usage-rate point guard with back problems (and later, leg problems), joined a team whose best player is one of the league's preeminent ball-hogs. Dwight Howard, the Lakers' most prized acquisition, was coming off back surgery at an earlier-than-expected date, and it was unclear if he even wanted to be in Los Angeles at all. Add in a coaching circus and supporting cast incapable of supporting, and you get last season's Lakers.

I'm not saying this season's Nets will be last season's purple and gold. Far from it. I'm merely pointing out that when you're dealing with the aging or injured, you must use optimism cautiously.

All that aside, there's a major difference between these two situations. While Los Angeles attempted to integrate new players into a system that was a terrible fit from the get-go, the Nets are adding experience to a core of players in their basketball prime. These acquisitions, in addition to the intriguing new presence of Jason Kidd at the front of the bench, give Deron Williams the best assist opportunities he's had since his days in Jerry Sloan's pick-and-roll system — if not better.

We don't know much about Kidd's offensive philosophy at this point, but it wouldn't be a stretch to believe it'll reflect his style as a player. If the system allows for Williams to control the ball and dictate the offense the majority of the time — which is likely considering the Nets would prefer to keep pressure off Paul Pierce and Kevin Garnett during the regular season — he'll put up major assist numbers with all those weapons at his disposal.

Players like Pierce and Joe Johnson aren't elite spot-up shooters, but they're serviceable in that capacity, and Garnett is one of the best pick-and-pop big men to ever play the game. With Brook Lopez ducking in and rolling to the paint, Jason Terry spotting up off the bench and Andrei Kirilenko scoring off of cuts and in transition, Williams will have a smorgasbord of options.

Nash's elite assist days clearly in the rearview mirror, and Rajon Rondo is coming off an ACL tear after losing Hall-of-Fame teammates (to the Nets), so Williams has as good an opportunity as ever to lead the league in dimes.

After a 49-win season last year, the Nets are set to potentially break records this time around. All they have to do is break the *52-win mark the franchise set in New Jersey during the 2001-02 season, and they should do that rather easily in an Eastern Conference that has plenty of available wins on the table.

*The franchise won 58 games as the New York Nets of the ABA during the 1974-75 season, but for this exercise we're going NBA only.

And as I said before, this team is stacked.

Did you know Lopez led all centers in scoring last season at nearly 20 points per game? As for the new guys, how many of you were aware that Pierce averaged 18.3 points, 7.1 rebounds and 6.1 assists per night on 45.9 percent shooting (41.7 percent from three) in the team's 34 games after Rondo was lost for the year?

Even on nights when Garnett takes a break — it has been reported he'll sit on the second night of back-to-backs — this team, in theory, will still be quite a bit better than it was at any point last year.

Brooklyn is going to win a ton of games during the 2013-14 season. Hell, they even have a chance to push their ABA franchise record. But it's reasonable to expect growing pains with so many additions, even with the main trio of players (Williams, Lopez and Johnson) still in place. But given the experience and intelligence of the players involved in the offseason transaction, the adjustments shouldn't take long.
It will be strange seeing Pierce in anything other than a Celtics jersey, but it'll all be worth it when his team finishes the regular season with a top-3 record in the East.
Salary info provided by HoopsWorld.