Why did the Spurs lose Game 6 of the Finals? Part 1: Is Splitter's 4th quarter shift to blame?

We'll be spending the coming days focusing on the details of Game 6 of the Finals, to determine what went wrong and set the record straight on things that fans "know" even though they have no basis in fact. First up, Tiago Splitter's 4th quarter.

Share All sharing options for: Why did the Spurs lose Game 6 of the Finals? Part 1: Is Splitter's 4th quarter shift to blame?

Like every other epic loss in sports history, a certain mythology has sprung up around the end of Game 6 of the Finals between the Spurs and the Heat. It's understandable for the loss to be a sore spot for every Spurs fan, and each person deals with the loss in their own way. But over the past few weeks a few camps have sprung up in Spurs nation, blaming certain parties for the championship that wasn't; some implicate Pop's late-game decisions, others denounce Manu's turnovers, some indite Green for disappearing, and the rest are split between dogging Splitter and Parker.

As the off-season progresses, we'll be focusing on the details of the loss to determine whether any of these cases have merit, or whether they're just things that fans remember even though they have little basis in fact. So it's time to exhume the casket of the 2012/13 Spurs to see what exactly happened, and find out whether or not the mistakes of the past are destined to be repeated.

This series will likely grow in scope as it develops and looks to more complex situations and even abstract concepts such as clutchness, but for this first installment I want to focus on a short but crucial stretch: early in the fourth quarter of Game 6, the Spurs squandered a ten point lead and gave the Heat back the momentum.

The Spurs wasted their lead early in the fourth quarter by being too tentative on offense and too soft on defense. The biggest culprit of the mini-collapse is Tiago Splitter. There's no way the Spurs allow ten points in four possessions with Tim Duncan on the court.

The Spurs lead by 12. Splitter fouls James after a pick and roll and the free throws drop the lead to ten. A somewhat cheap foul but an understandable call by the ref. The Spurs get the last shot of the quarter but Parker misses. End of the third. We now get to the moment we will discuss.

1) Miami won the tip off, so they get the ball to start the forth quarter. James penetrates, Manu helps off the weak side corner perhaps a little too much and Mario Chalmers hits an open three after the pass. The lead is seven. 2) The Spurs run their offense, with the ball moving beautifully until Boris Diaw holds it for five seconds and launches a prayer hook that misses. 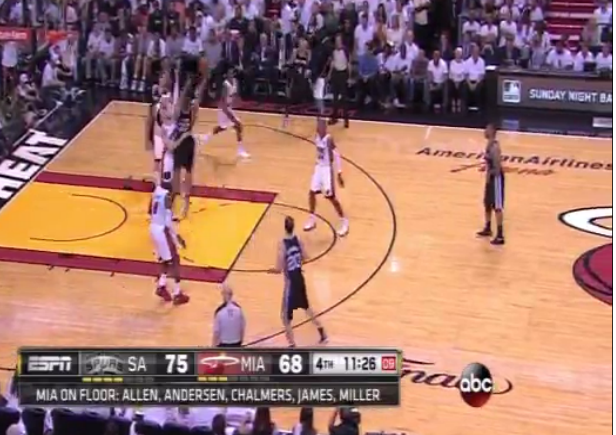 3) James has Diaw on him, so he takes him as far away from the basket as possible and prepares to attack the rim. Birdman starts preparing to set a pick and Diaw (instead of going under the pick to make James take a jumper, or going over it and staying with him) switches to Birdman even before he sets the pick, even though he's far from the rim. Splitter has James coming at him at full speed and Danny Green can’t help off the strong side. Splitter back-pedals but there is not a lot he can do to contain James in a semi-open court. James gets past Splitter and hits the layup. The lead is down to five. 4) Immediately after that, Splitter hits a lefty hook after a pick and roll to get it back to seven. 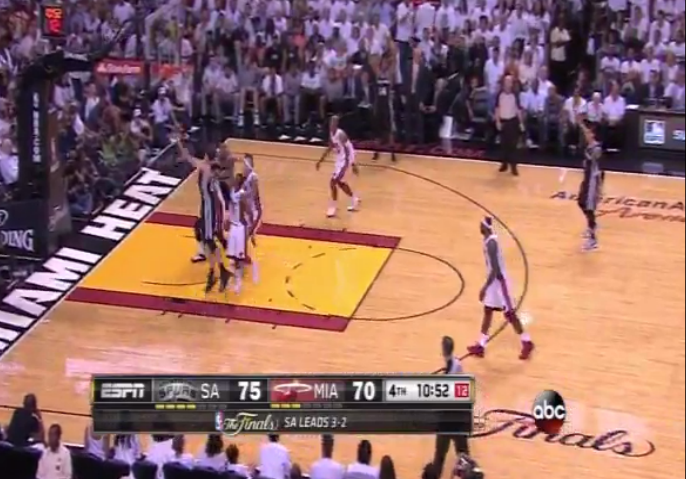 5) James once again tries to take Diaw as far away from the basket as possible. Mike Miller loses his shoe and Neal leaves him open to help on James. James hits Miller who connects on a three pointer. Lead is down to four. 6) The Spurs move the ball around, Green finds Splitter on the pick and roll. Instead of trying to finish with his left like the previous play, he fakes, pivots and hits a righty hook to get the lead to six. 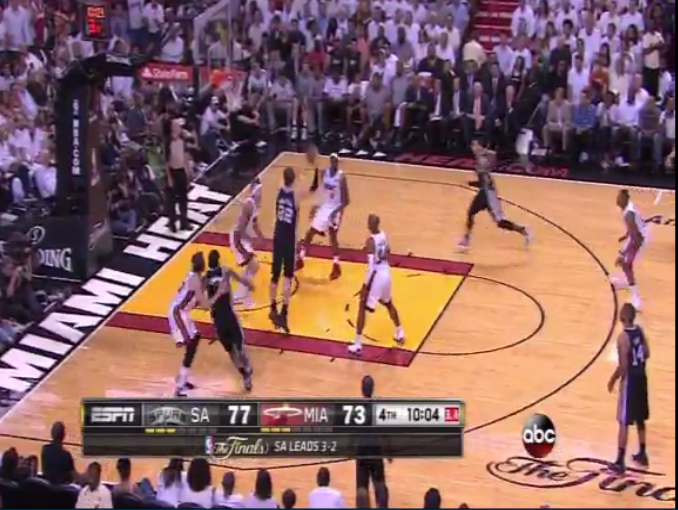 7) Duncan checks to the table. The Heat run a a 4-1 pick and roll (that's the stuff you can do when you have Lebron on your team) then switch to a 1-4 pick and roll at the free throw line. Chalmers goes left, Manu trails, Leonard hedges. Splitter can’t abandon Birdman because he is on the strong side. Neal should have rotated but probably didn’t want Miller to burn him again. Chalmers hits James with a bounce pass rolling to the basket, Lebron gets the ball and dunks. 8) Ginobili gets fouled, sinks one and Duncan comes in for Splitter.

There's nothing Splitter did on those eight plays that can be characterized as wrong. The Spurs ran their offense and scored on two of their four offensive trips and got fouled on one. Tiago scored four of the five points they had during the stretch. The Heat scored on their four offensive trips, twice hitting threes Splitter couldn't do anything to prevent and twice having Lebron James, one of the league's best finishers, scoring at the rim. Those two easy buckets were not a result of Splitter's inadequacy as a rim protector but of the Heat's flawless floor spacing and ability to find ways to get Lebron free. They first attacked the Diaw-on-Lebron mismatch by drawing Boris out, which resulted in him getting lost, and then used a devastating 1-4 pick and roll with Lebron James as the roll man.

Had Duncan been on the court, it's likely the results would have been the same, as Tim can't stay with Lebron in space and he can't really cover that much ground on pick and rolls. You can make a case that the guards would have stayed home instead of helping on penetrations had Duncan been playing but that's not how the Spurs were defending. Credit should go to the Heat, who understood that having James attacking Diaw close to the basket was a mistake. Drawing him outside was the way to go. Similarly, they understood that James does a much better job of functioning as a big in pick and roll situations than Leonard does as a defender in a setting he is not used to.

Yes, Manu and especially Neal shouldn't have been pulled so far from their men when helping, and Diaw and Leonard should have made it a point to stay with James. Splitter is the last line of defense and he couldn't prevent those buckets. But those four offensive possessions (five, if we count the last Heat possession from the third quarter) point more to James being a transformational talent than they do to the Spurs defense being particularly bad during that stretch. When the best player in the league is rolling, there's not a lot you can do to stop him.