Who are the NBA's best 3-and-D players?

They're all the rage nowadays. But what is a 3-and-D guy, really? Let's try to figure it out and find the best of the bunch.

Share All sharing options for: Who are the NBA's best 3-and-D players?

The 3 and D player has never been more popular than now. Every team wants a low-usage wing that can spot up efficiently from outside the arc and excel defensively; the glue guy that doesn't need plays called for him and is instead happy to just wait for the ball to swing his way while spacing the floor for his more offensively talented teammates.

But with the advent of this type of role player, it seems every shooter that can't dribble and every solid defender that can't score seems to be called a 3-and-D guy. But what is a 3-and-D player really? And which ones are the best?

First, the 3-and-D guy needs to be able to hit the three at a high rate. It's right there in the name. If a guy can't shoot, he is a D guy. So the first step is to look at players that can shoot. Then I wanted to exclude any high usage players that happen to launch a lot of threes, in order to weed out guards that handle the ball a lot instead of simply spotting up. So I looked for players that shot the three at above a 35% clip and qualified for the league leader's board, while having a usage percentage lower than 20% and an assist percentage of under 15%. 30 names came back.

That seems like a very good list of 3-and-D guys. Some players that are often referred to as 3-and-D guys didn't make the cut, and that's because last season they were also trusted to create for their teammates (like J.J. Redick), were featured offensively (Arron Afflalo) or don't shoot well enough (Tony Allen).

Ranking them by shooting proficiency

Now that I had my 30 names, I wanted to rank them. To do that I set out to find statistical evidence of both a) their proficiency at defense, and  b) three point shooting -- and then combine it. The easy part was determining who could really shoot. I ranked them from one to 30 by three point percentage and total three point attempts. The best at each category received 30 points, the worst received one point. I also found what percentage of three pointers each player shot out of their total field goal attempts, which highlighted players that use the three pointer as their main weapon. But I didn't consider this to be as important as the other two categories, so I awarded the first ranked 15 points, the second 14.5 and so on until the last guy received 0.5 points. Here are the results:: (click to enlarge) 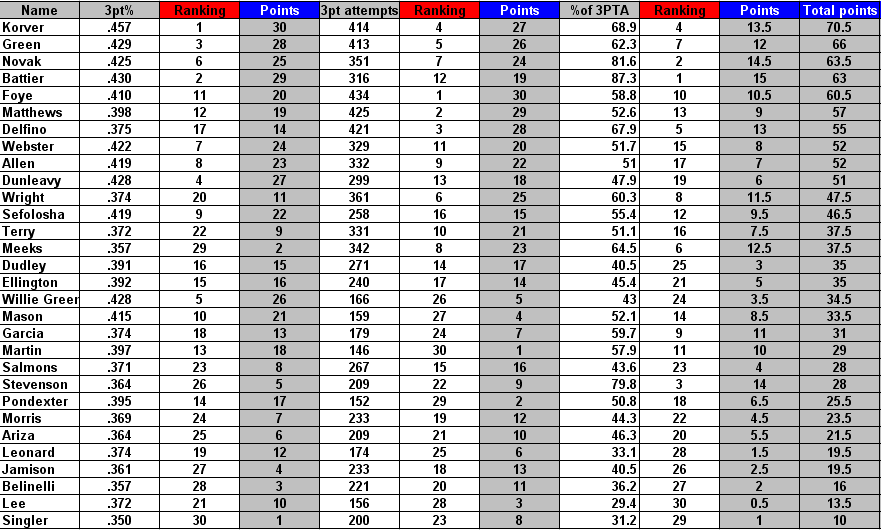 It's no surprise Kyle Korver ran away with this one, as he has been one of the best shooters in the league for a while now. You can also see three levels forming: the elite, comprised of the best shooters, in the top ten. A middle group from eleven to nineteen: shooters that are both acceptably prolific and efficient. Then a significant drop off from there to the end, where we find players that either took significantly fewer three pointers, hit them at a lower rate, or both.

The Spurs had Green in the elite category, as he both took a lot of threes and converted at a ridiculously high rate while Kawhi Leonard doesn't compare favorably as a three point shooter against the experts. Something similar happened with new Spur, Marco Belinelli, who didn't stand out from this field as a shooter last season with the Bulls.

Randy Foye and Wesley Matthews ranked better than I anticipated, while Courtney Lee, who was a sought-after free agent prior to last season, seems to have had a very rough season with the Celtics. I expected Ray Allen to rank even higher but he still fares well here.

With the offense (the easy part) out of the way, I focused on defense. It's extremely hard to measure defensive ability through stats, so I tried to look for two numbers that would give me an idea of how a player impacted team defense and how he handled his individual assignment. I settled for on/off court defensive rating differential (whether the team was better defensively with a player on the floor or off) for the team aspect. For the individual part I settled for points per possession allowed (PPP allowed). I used MySynergySports.com (a site that tracks plays and categorizes them by type) for this. Defense is obviously played as a team but those individual numbers are as close as possible to isolating individual defense.

Finally, I used total minutes played to reward players whose defensive abilities allow teams to have them on the court for longer and punish players that are only situational. The points distribution is the same as in the portion on shooting. 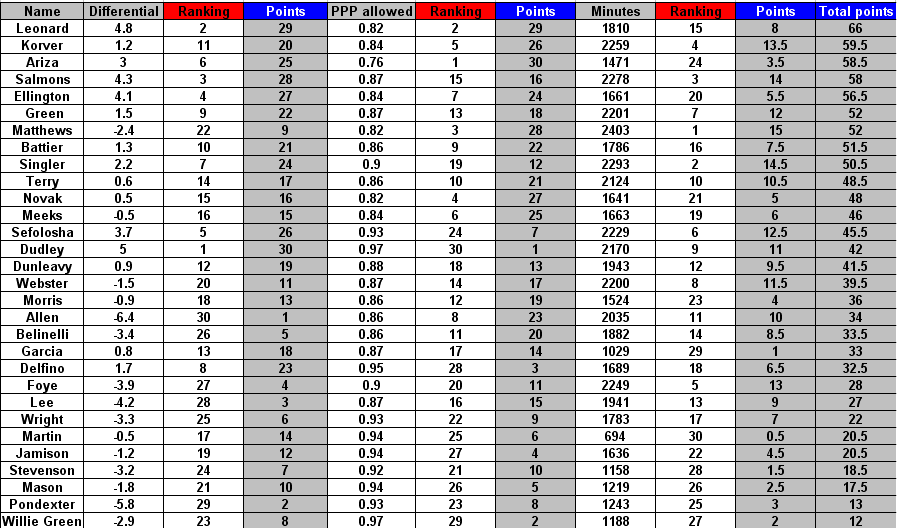 Leonard ranked second in both defensive statistical measures (trailing Jared Dudley in terms of on/off court differential and Trevor Ariza in terms of PPP allowed) so his combined total placed him first. Danny Green ranks in the top half of both tables but doesn't really shine.

Perhaps the biggest surprise here is how well Steve Novak fared. The Knicks were better defensively with Novak on the floor and he held his own individually, according to Synergy. Novak truly is the new Matt Bonner.

The other strange occurrence was seeing Dudley at the top of one table (on/off differential) and at the bottom of the other (PPP allowed). Ray Allen sees the opposite happen to his ranking, going from the bottom at on/off court differential to a very respectable eighth place in PPP allowed. The results from Ellington, Meeks and even Belinelli in terms of PPP allowed can be explained by the fact that they were likely guarding the other team's least effective offensive player.

Now that I had both the 3 and the D pieces of the puzzle, I added the scores from the two sections and came back with the 3-and-D ranking. Here are the results: (click to enlarge) 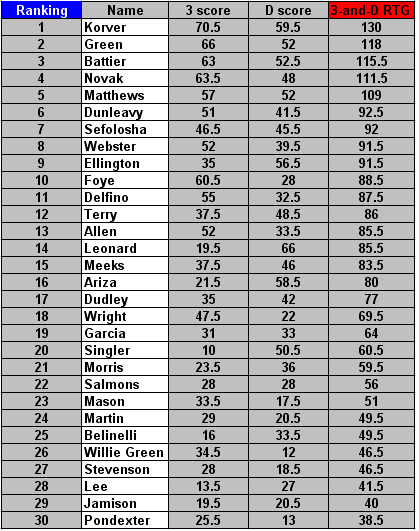 If you prefer it, here it is in chart form: 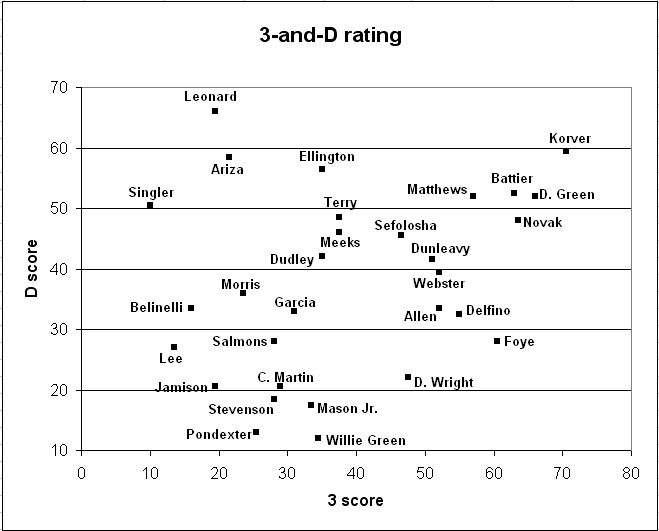 All hail Kyle Korver, king of 3-and-D. No wonder he got paid a hefty sum for a role player. Korver is elite at what he does.

That's a pretty reasonable list, if I may say so myself. If we take Novak out of the equation (since so many of his minutes come at power forward) we get a top five of Korver, Danny Green, Shane Battier, Wesley Matthews and Mike Dunleavy Jr. Then we have Thabo Sefolosha, Martell Webster, Wayne Ellington, Randy Foye and Carlos Delfino. Other than Novak, the only surprise seems to come from seeing Ellington that high.

Once again we can also see different strata forming. The top 20 seems to be comprised of real 3-and-D role players, including the elite, while the lower portion consists of guys who struggle in either the three or the D part of the game.

This ranking is not exactly a strict scientific study or anything close to it. I picked the stats I thought represented 3-and-D role players the best but others might disagree. Like I mentioned, figuring out the D part of the equation is especially hard and I was surprised by some of the numbers.

This is also only intended to rank players only in terms of their value in the 3-and-D role. Players like Terry or even Belinelli also have value as ball handlers and that is not something I considered here. Similarly, Leonard's rebounding probably makes him a better all around player than Korver while Novak's lack of any skill other than shooting makes him a situational player at best.