Why did the Spurs lose Game 6 of the Finals? Part 4: Shall we just blame Popovich?

Here's another look at the details of Game 6 of the Finals, as we try to determine what went wrong and set the record straight on things that fans "know" even though they have no basis in fact. This time, Pop's mistakes.

Share All sharing options for: Why did the Spurs lose Game 6 of the Finals? Part 4: Shall we just blame Popovich?

Like every other epic loss in sports history, a certain mythology has sprung up around the end of Game 6 of the Finals between the Spurs and the Heat. It's understandable for the defeat to be a sore spot for every Spurs fan, and each person deals with the loss in their own way. But over the past few weeks a few camps have sprung up in Spurs nation, blaming certain parties for the championship that wasn't; some implicate Pop's late-game decisions, others denounce Manu's turnovers, some indite Green for disappearing, and the rest are split between dogging Splitter and Parker.

As the off-season progresses, we're focusing on the details of the loss to determine whether any of these cases have merit, or whether they're just things that fans remember even though they have little basis in fact. So it's time to exhume the casket of the 2012/13 Spurs to see what exactly happened, and find out whether or not the mistakes of the past are destined to be repeated.

J. Gomez has already taken a look at these possibilities:

In this installment, I focus on Popovich's decisions. And since Gomez did such a good job on the first three parts, I've enlisted his help as a devil's advocate. He pulled together some of the recurring gripes about how Pop lost the game, and he'll be arguing the case against Popovich.

It's impossible to discuss Pop's involvement in game six loss without starting with his decision to change the lineup with the Spurs up five and 28.2 seconds to go in the fourth quarter. Tim Duncan sat and the best rebounder left on the floor was Kawhi Leonard. Sure, you need to cover shooters but you also need to secure the ball if they miss. Just because the Heat go with five shooters doesn't mean the Spurs should immediately match.

Why did Pop make that substitution in a potentially title clinching game? Shouldn't the Spurs best rebounder, their leader, the living legend Tim Duncan be in the floor in such a defining moment?

If this was the first time Pop ever did this in a late-game situation, I'd understand the need for the question, but he's been doing this all year. In situations where the opponent is trying to come back with very little shot clock, and needs three-pointers, Pop's go-to defense consists of mobile defenders who can switch every pick, and contest every shot. He did it against both the Lakers and Sixers in January alone. Pop obviously believes that having a man on the shooter, so that he's not able to fully concentrate on the shot, is more important than anything else in these situations. Yes, even more important than having the team's best defender on the court in the game's final seconds.

But this was different. This was a championship game. Wasn't it worth a shot to change his approach for this particular game? If the Heat missed, which is obviously what the Spurs wanted and the reason they went with mobile defenders, all they needed was a rebound. Having Duncan out there would have helped in that area even if he hurt a little in terms of contesting. Similarly, the Spurs could have also fouled instead of risk conceding a three pointer on those last two plays. Make Miami hit a couple of free throws to stay alive and then hit yours. When Manu was asked about it by the Argentine press, his answer was "that’s not what we do." But the Spurs have no problem fouling poor free throw shooters intentionally. I guess what I have a hard time understanding is why Pop is so entrenched in his ways. For a guy that is lauded for his in-game adjustments, there are a lot of things he just won’t ever do.

It's not that he usually leans a certain way in specific situations. It's that he has sat down and decided which strategy he thought would produce the most wins if he stuck with it. And then he stuck with it. End of discussion. No debate.

That's what makes the "But this was different" argument null and void. The man has already made his decision. The team had already won games this season with the strategy. Pop knows that he's going to be second-guessed if they lose, just as he'll be praised as a genius if he wins. (Same with the fouling strategy.) But he knows that he's just playing the percentages and there's only so much that he has to do with it either way. So he made the substitutions he'd planned beforehand and sat back to see what would happen.
You say Duncan would have helped in rebounding (which I'll get to in a bit) "even if he hurt a little in terms of contesting." Problem is that there's no such thing as a little bit of harm when contesting every shot. You're either in front of your man with a hand in his face, or you're not. If Duncan "hurt a little bit" then there's an open man getting a great look and it doesn't matter about rebounding because the shot's likely to go down. And that's not even considering that if Duncan's contesting on the outside, then his rebounding has been compromised anyway.
Now to the rebound that wasn't. The play that ended with James making the first three pointer to cut it to two points, began with James badly missing a three from the top of the key with Green's hand in his face. The rebound came off, was popped into the air, and then this happened: 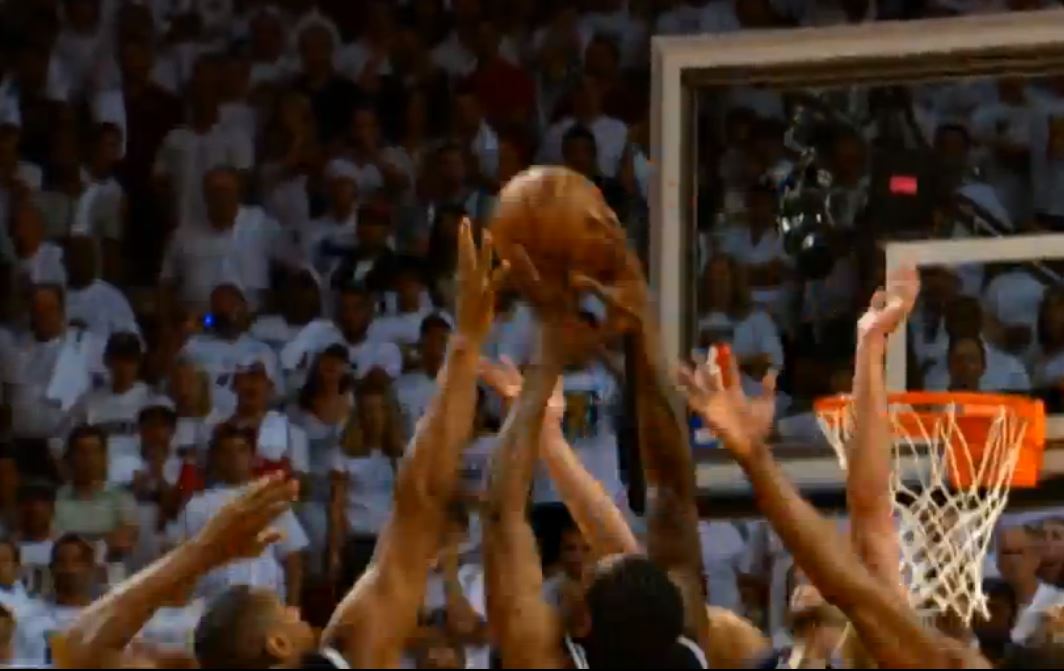 In the center of this image is Kawhi Leonard with both of his hands on the ball. To Kawhi's right is Manu with both of his arms stretched out, but with no real chance to get the board. Just this side of Ginobili is Ray Allen's right hand, but he has even less of a shot than Manu does. To Kawhi's left is Boris Diaw. That means of the three people closest to the ball, all three of them are Spurs. And you want to talk about San Antonio needing more rebounding on the floor at this point.
So why didn't the Spurs control the ball? Because Boris Diaw is moving straight toward the basket in that frozen image and the instant after the one preserved in that photo, Diaw's right arm smashes right into Kawhi's left hand (the one which is barely on the ball in the picture) which sends it careening away from all three of them. Essentially, it was a "same ball" situation. One of those stupid things that happens half a dozen times a game. Two guys fight over a loose ball without realizing that they're teammates. That's it.
It wasn't Pop's strategy that backfired, it was the breaks of the game. Or it was Boris not checking to see whether a fellow Spur was directly underneath the ball as it came down and there was no need for him to crash the boards. Pointing to any one person is a simplistic, narrative-driven way of looking at such a closely-contested game when any missed free throw or botched rebound would have secured the win. It's a painful loss, but it's not one that anyone deserves to wear goat horns over.