Who's taking all of the Spurs' shots? Playoff edition

In this addendum to an earlier post, we take a look at who used the Spurs' scoring possessions in the playoffs.

Share All sharing options for: Who's taking all of the Spurs' shots? Playoff edition

After taking a look at how the Spurs were divvying up possessions in the regular season, some readers wonder how those charts would look if they reflected the playoff numbers instead. It's a really interesting question so I decided to explore it. The methodology is the same. I found the usage and true shooting percentages to see who is efficient versus who just uses a lot of possessions. Then I looked at whether the majority of a players' made field goals were assisted or unassisted. Here are the results and you can check and compare the regular season numbers here. 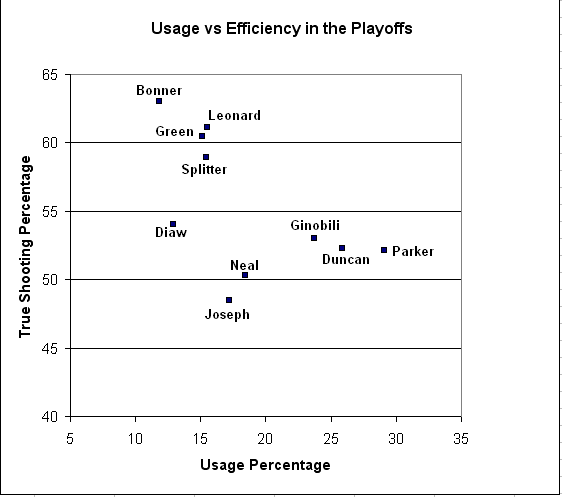 Now let's look at true shooting percentage and percentage of unassisted field goals to see who created their own shot. 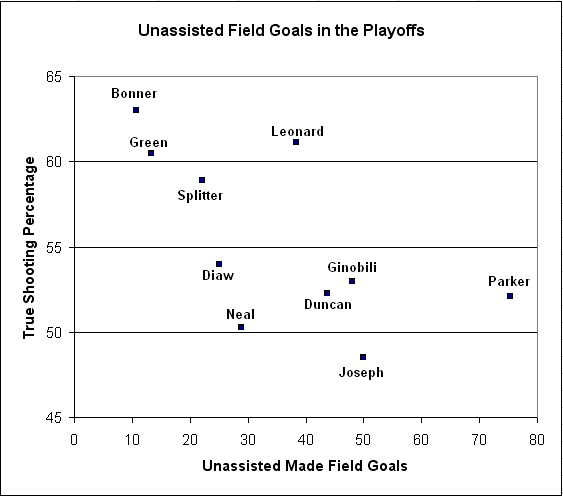 The scale is a little different here from the original regular season chart but the same is true: the higher and to the right a player appears, the more effective he was and the more he created for himself. The drop-off in efficiency from Parker and Joseph is understandable, as they saw pretty significant increases on their unassisted field goals (not to mention Tony's hamstring injury which held him back as the playoffs progressed). Ginobili also saw an increase in his percentage of unassisted makes in the playoffs, but the biggest discrepancy came from Duncan. Tim went from getting his points on mostly assisted looks in the regular season to being heavily relied upon in the playoffs to create for himself. It was noticeable, as the Spurs went to Duncan in the post a lot more. That clearly hurt his efficiency.

Still, the Big Three responded well. The problem came when the Spurs looked to other role players to create offense. Neal was as mediocre in the playoffs as he was in the regular season in terms of efficiency but Diaw sees the biggest drop here. Boris simply refused to take spot up jumpers and that left him to create his own looks more either from mid-range or in the post, which destroyed his efficiency. Splitter was similar although not as bad. This chart seems to argue that, after the Big Three, Kawhi Leonard should have been the next option, as he created a lot of his offense but remained efficient.

The Spurs' stars predictably saw their efficiency decrease, but they were still very good. The efficient role players that relied on others to create shots for them remained both efficient and unable to consistently create offense for themselves. The problem was the Spurs relied on Diaw and Neal to bridge the gap between the two groups in terms of scoring and they couldn't deliver.

Once again, Leonard looks great here. In his sophomore year Leonard was able to produce consistently and efficiently, even if he didn't carry the load to create for himself as much as others. It will truly be fascinating to see how Leonard does next season. And since this has been such a visual post, let me leave you with this great heat chart, courtesy of Basketball-Reference, showcasing Kawhi's awesomeness in the playoffs. 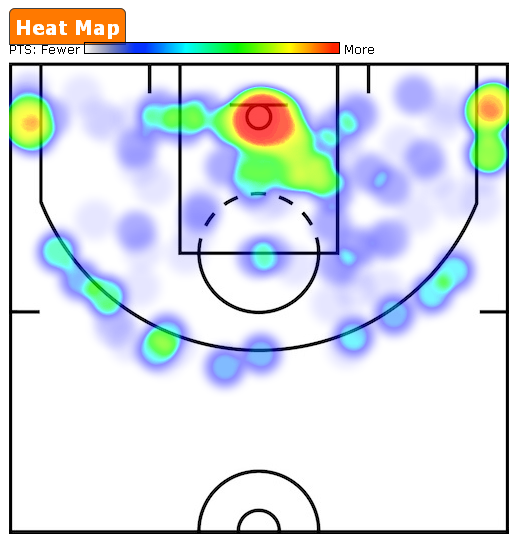 Notice those hot spots in the corners and at the rim (the most efficient areas of the court)? Me too. How long until the next season starts again?