What is up with the Spurs' salary cap situation?

It's been a busy week for Spurs cap-ologists. PATFO has re-signed Tiago Splitter, and Manu Ginobili -- then dropped a bomb on Spurs Nation by signing Marco Belinelli yesterday. If you're wondering what that leaves them in terms of the salary cap, you've come to the right place.

Share All sharing options for: What is up with the Spurs' salary cap situation?

Alright, since there's been a lot of confusion as to where the Spurs stand in terms of salary cap and signing options, let's do a brief run down. I'm using cap figures available at ShamSports. (I tried to double check everything but there could still be mistakes here. If there are, I'll update the post and correct them.)

Assuming the Spurs honor the offers they reportedly made to Ginobili and Splitter (and don't package them in a sign-and-trade or do some other clever thing once July 10th comes and signings are allowed) they will have $56,866,028 in committed salary to the following players:

With the cap likely to be set at $58,500,000, the Spurs are under it by $1,633,972 if they were to renounce all their cap holds and the Mid-Level Exception (go here for a primer on the MLE). Without doing that, the Spurs are actually over the cap.

What does the Marco Belinelli signing mean for the Spurs? 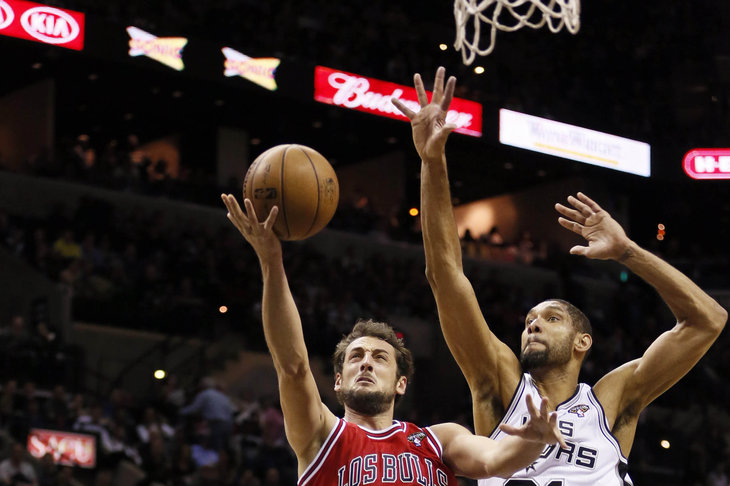 The Spurs added their first free agent, Marco Belinelli. Here's a look at how he should fit in with the boys in San Antonio.

Marco Belinelli seems to have signed for $6 million over two years or, according to other reports, something less than that. Unless it's under $2 million, it doesn't matter. The Spurs would have to dip into their mid-lvel exception to sign him, leaving around $2 million left (depending on how much of the $5 million MLE Belinelli gets) to sign someone else.

If my calculations are wrong by a few hundred thousand and the Spurs get to fit Belinelli under their cap by renouncing the players that have any cap holds, the Spurs would be able to use the Room Exception, which is only worth $2,5 million. That's not a lot more than what would be left of the MLE.

If they amnesty Bonner and use part of their cap space to sign Belinelli, they will have a little under $3 million to offer another free agent plus the Room Exception. So theory that the Spurs should amnesty Bonner, sign Belinelli using their cap space and use the room exception to sign a big, turns out to accomplish very little. That's because the maximum a team can offer someone for the Room Exception is $5 million over two years, while the MLE goes up to four years. That means that in total salary, the Spurs could offer more using the MLE than the Room Exception. For example, they could offer someone $6 million over three years instead of $5 over two. With the type of free agent they can target, the difference is minuscule.

Amnestying Bonner would allow the Spurs to add two cheap players -- one using the cap space and the other using the room exception -- instead of one. But what are the chances whoever they bring to replace Bonner is actually better than him? So, the Spurs using the amnesty provision seems like a long shot. Expect PATFO to add only one other player using the rest of the MLE and, if needed, someone else at league minimum.