Who's taking all of the Spurs' shots?

Which Spurs were the best offensive options last year? Who took the most shots? And should we be upset if those two answers aren't the exact same list of guys?

Share All sharing options for: Who's taking all of the Spurs' shots?

One of the debates that regularly arises among fans is: Who should be shouldering the burden on offense? Stars usually carry the load in terms of usage percentage while maintaining a high efficiency; that's what separates the Tony Parkers from the Monta Ellises, even if their raw numbers are somewhat comparable. When it comes to role players, most teams want theirs to keep their usage low but their efficiency high. There are not a lot of high usage role players out there besides from the instant offense, sixth man type. We all know that and the Spurs generally adhere to those principles.

But after reading Tom Ziller's graphic look at the Kings' offense, I decided to do a similar chart with the Spurs' players to figure out if the right guys were using the possessions, and to separate the efficient from the trigger-happy. I tracked usage percentage (the percentage of team plays used by a player when he is on the floor) instead of Ziller's choice of usage rate (calculates shooting percentage adjusting for the value of free throws and 3-point field goals) as the measure of efficiency. I added the newcomers, just for fun. Here is how it turned out. 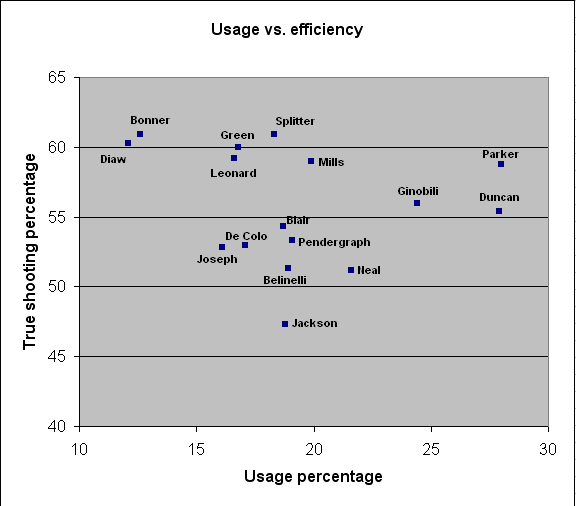 Nothing too surprising. You want your stars to be as high and to the right as possible. Parker was fantastic and Tim Duncan and Manu Ginobili were good as well. The "Small Three" of Danny Green, Kawhi Leonard and Tiago Splitter are medium usage, high efficiency players. The rest is a bit more interesting.

The strangest case is Mills. Mills puts up very good efficiency numbers on a relatively high usage. The caveat here is that he played a lot of garbage minutes, but Mills seemed to be better than Neal at Neal's designated job as gunner off the bench. Then you have visual representation of just how terrible Jack was last season. It's strange that he didn't eventually bounce back because, even though he was never a particularly efficient player, for his career Jackson was significantly better than what he showed last season. Still, those numbers are likely giving teams pause in terms of signing Jack.

This type of graph is great to detect similarities. Look how the cluster of players in the middle are neither particularly efficient nor able to handle a bigger load. Neal is a high usage player (highest usage percentage other than the Big Three) but is not particularly efficient (or at least he wasn't last season). Blair never reached the efficiency he achieved in his rookie season despite seeing a drop in usage, making him the least efficient of the Spurs' bigs. The back-up point guards are very pedestrian, and the new guys had similar numbers to the players they're replacing. Projecting how they will do with the Spurs is hard since we don't know what role they will play, but with marginal improvements they should be at least as good as the guys that left.

This graph shows usage without accounting for the circumstances of the field goals. Mills is more efficient than Neal but he probably gets more assisted looks than Neal, who was trusted to create for himself a bit. So let's look at players who created and converted their own shots. For that, I'll use true shooting percentage and percentage of unassisted field goals. Here are the numbers from the regular season: 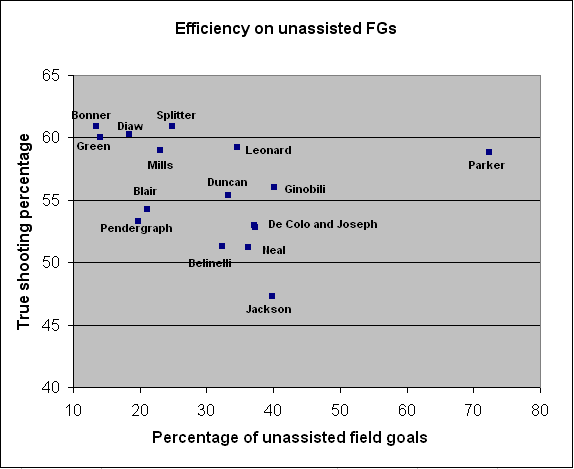 Breaking this chart down; the further to the right a player is, the more he scored on shots he created. The higher up players are, the more efficient they were in terms of true shooting percentage.

First of all: holy crap, Tony Parker! Tony created over 70% of his field goals and still managed to have a very good true shooting percentage. What a season that guy had.

After Tony we see Manu Ginobili and Stephen Jackson as the Spurs that created more of their makes. Ginobili was significantly better than Jackson, whose uncharacteristically terrible season seems to look bad no matter the chart.

De Colo, Joseph, Neal and Belinelli are clustered close together as guys that create a good amount of their own shots but don't score all that efficiently. In the middle and to the left we have Blair and Pendergraph, who neither create their own shots a lot nor convert at a high rate.

You can see Duncan didn't create as many of his own shots as in the past. Timmy had that mid-range jumper working and used it to score at a good rate on assisted buckets. Right above him we have Kawhi Leonard, who shows really encouraging signs by being efficient despite creating a fair amount of his shots. Part of that is his transition opportunities, but I'm really looking forward to what Leonard can do next year when isolated at the elbow and mid-post, hopefully after 1-3 pick and rolls.

To the upper left corner we have the high efficiency guys that depend on someone to create shots for them. Of course Diaw and Bonner are close to each other but I was a little surprised at just how many of Green's field goals were assisted. He's nearly as efficient as Bonner, and is only used a little bit more. Finally, Splitter created more of his shots than those guys but it'd be great if he could improve there so that the Spurs can get Duncan as much rest as possible. If he can get anywhere near Duncan's number that would be fantastic, even if his efficiency drops a bit.

It looks like the Spurs have the right players using most of their possessions and it's understandable that they didn't bring back Neal and Jackson, as they used a lot of possessions but were not scoring efficiently. The hope is Belinelli can replace Neal by improving his efficiency while getting Leonard to up his usage while maintaining his great true shooting percentage. Parker was fantastic and Ginobili's numbers are a bit better than I remembered. That may change when I check on his assist to turnover stats in an upcoming post, but Manu looks good on these charts.

As for the bigs, Timmy is not the offensive force he once was and Splitter wasn't able to create his own shot often enough last season. It would be great if his post game became a bit more reliable, but I'm not going to hold my breath. Diaw and Bonner seem to replicate a lot of what each other can do, but at least both were very efficient. Pedergraph doesn't look like too big an upgrade on Blair, but considering a lot of his looks were from mid-range, his efficiency was alright and he could benefit from the San Antonio guards' play-making to improve his true shooting percentage.

All stats courtesy of NBA.com/Stats