Finals Talk: Kawhi Leonard is becoming more like Gregg Popovich by the day

He doesn't talk much, and when he does speak it's not very loud, but Kawhi Leonard spent some time with the press yesterday, and showed that he's not just Pop's disciple on the court, but in the media room as well.

Share All sharing options for: Finals Talk: Kawhi Leonard is becoming more like Gregg Popovich by the day

One of the best things about the San Antonio Spurs being in the Finals is that the league requires PATFO to make everyone on the roster available to the media on a regular basis. While this may not be something that would work on a year-round basis, given the organization's attitude toward the media, it's exceedingly cool for this reason alone: we get more Kawhi Leonard material. If you've never had the joy of experiencing one of his interviews, you're going to want to stick around for my explication of the Q&A he had with the assembled media on Friday.

But before I go there, here are some great stories that have been recently written about the youngest member of the Spurs:

First, here's Kelly Dwyer's piece on Leonard for Ball Don't Lie which contains this nugget about Kawhi considering passing on the chance to join the US Olympic team's practices this summer:

Resting up for training camp, rather than battling it out with LeBron James in full view of Mike Krzyzewski and Jerry Colangelo. This guy is a sports columnist's dream.

After Spurs fans have spent the last decade worrying about what would happen to their precious Argentine while he's out risking life and limb for his national team, it's pretty refreshing to think that Kawhi might actually care more about getting healthy than he does about helping LeBron and company grab another gold.

Then there's Rick Reilly's profile piece on Kawhi which yielded the following bit of excellence that I feel certain will be quoted quite often in PtR's comments section:

Leonard fits into the sensible-shoe Spurs the way slices fit into toasters. He issues a decent quote once a year, lives only to win, and is allergic to bling. He owns one watch and one chain. "I'm not gonna buy some fancy watch just to show people something fancy on my wrist," he says.

It's quotes like that which make people talk about how Leonard seems to have been custom ordered by Pop specifically for the Spurs. In fact, Matt Bonner might just have another Spur that could give him a run for his money in the frugality department.

His entire rookie year, he drove a Chevy Malibu. This year he finally bought a Porsche. But he still drives the Malibu more. "It gets good gas mileage," he tells incredulous friends.

Yeah, the next thing you know, Leonard will be starting up his own sandwich blog!

And now to the real reason for this post; Kawhi's interview time with the media in Miami yesterday. Feel free to listen to the whole five minutes' worth of joy if you like. While the whole thing was quite entertaining to me, the highlight was an answer he gave to the question someone asked about whether his particular build (the big wingspan and huge hands) was helpful for him in guarding LeBron James. He admitted that it probably does assist in limiting LeBron's space and making him work harder, but he really didn't know because:

Ok, first off, it would appear that he's becoming more like Pop by the day. Doesn't that sound exactly like extraneous G's thought process when dealing with the media? "Well I suppose you're right, but I can't really say whether my frame helps me guard LeBron better seeing as how I've never tried to guard him without it." It would be impossible for Pop to foresee that question, and prepare Kawhi with just the right sardonic response, but can you imagine anything else that he would've given Leonard to say in reply?

Second, there's the issue of the literal meaning of the words: Kawhi Leonard has never had short arms and small hands. While I suppose that's quite possibly true, it doesn't keep my mind from going on the kind of tangent that it so often does, chasing phrases around until they yield a very different meaning than what was originally intended. But I can't help it; when I hear him say that he's never had short arms and hands, the first thing I do is picture him as a baby with the arms and hands he has now.

So I asked our resident photoshopper, DrumsInTheDeep, to come up with an artist's rendition of what Kawhi would have looked like as an infant if what he said was really true, and here it is. 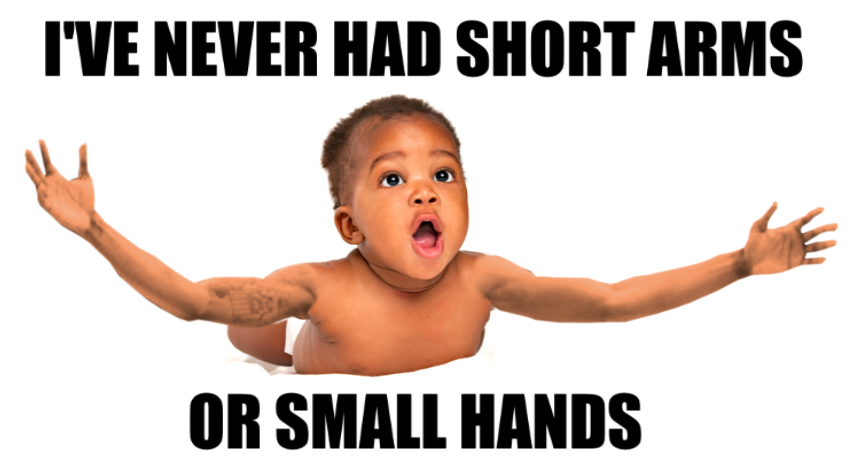 Boy, second chance points sure were huge in Game 1, weren't they? While the Spurs were out-rebounded by 9, and out offensive-rebounded by 3, according to the whirlwide liter they led the Heat in second chance points 21-8. Now, just glancing at the box score for the game could make you pause and wonder about that number because San Antonio only tallied 6 offensive rebounds all night and even if they hit a three after every single one of those they still couldn't get 21 points out of them. I've been told that it's because of those pesky team rebounds and whatnot, but I'm not entirely sure I understand it, but I'll keep digging. Stay tuned

Thanks to long time £er Alamo, for the following explanation of the rebounding weirdness in Game 1's boxscore:

The Spurs first offensive team rebound was due to Bosh fouling Tiago while fighting for a rebound at the 7:24 mark. After the inbounds, Tony scored two points. At the 4:56 mark of the first quarter the Spurs had a team rebound on a miss by Tim, which I expect was the Heat last touching the ball before it went out-of-bounds. Six seconds later and Danny made a three on an assist by Boris. Then with 2:08 to go in the first half, Manu missed a layup (I believe he was fouled but it wasn't called) and the ball went out-of-bounds off the Heat. That was followed by Tim scoring on an assist by Tony. There's 7 points on offensive team rebounds.

On normal offensive rebounds, the first one for the Spurs was by Tim and he was fouled with it resulting in an inbounds play. Danny winds up with a three on a Neal assist. Second offensive rebound was also by Tim (both in the 2nd Qtr) but this time he put it back in himself for a layup. Third OR was by Kawhi in the third quarter, and it turned in to a three by Neal. The fourth OR was by Tiago late in the 3rd quarter, and it was turned in to the foul against Manu in which he made two FTs with three seconds left. Fifth OR by Kawhi with 7:01 and he puts it back in for two. The final OR and Tim made the putback. Six rebounds and each one led to a score for a total of 14. Twenty-one points on 6 ORs for individual players and another 7 points on three team rebounds.

.017 -- found out this tidbit from SBNation's Daily Win, where the hilarious Matt Ufford holds forth on whatever he feels like. Seventeen thousandths of a second is the amount of time between Tony Parker releasing the ball, and the 24-second buzzer sounding. I've always heard it said that basketball's a game of inches, not nanoseconds.

Also, that video of Ufford's contains this line about why the Miami Heat have the worst fans:

Is it because their excellence attracts celebrity, douchebag, front-running fans? Yes!

Yeah, Biebs in that leather shirt on Thursday night was ... interesting.

I've always loved Calvin and Hobbes and I've recently subscribed to GoComics.com so I can have a C&H strip emailed to me daily, but I included today's because the first panel reminded me of Birdman, and Hobbes' comment in the fourth panel reminded me of the four guys who inspired me to write the summary of yesterday's Me, My Spurs, and I (not so much you, Michael, chin up).