What options do the Spurs have in free agency?

Share All sharing options for: What options do the Spurs have in free agency?

As you might have heard, the NBA draft was this past Thursday and, as Stampler said in his must-read draft diary, it marks the start of a new season. Heartbreaking endings aside, 2012/13 was fantastic for the Spurs, but now it's time the team will start making the decisions that could get the Spurs back in the Finals in 2013/14. With that in mind, we bring you this off-season primer so you have all the info you'll need when the moratorium ends and teams can start talking to free agents. You know, just in case you run into R.C. and he asks for your help.

Before we jump right in, let's have another quick look at the draft.

The Spurs shocked the world (or maybe just anyone who hasn't been paying attention) when they took a foreign draft-and-stash prospect with their late first round pick. Livio Jean-Charles seems like a high upside prospect that plays for ASVEL, the French league team Tony Parker owns a share of. So we have to assume the Spurs have some insider information other teams didn't have, as Jean-Charles didn't travel to the US for the pre-draft process. Here is Sam Bunnell's draft day post about him. We'll probably have more on the young French combo forward soon and we'll certainly be keeping an eye on him.

I have to say, I like the move. It seems the guy can play and has some interesting physical tools. By stashing their draft pick, the Spurs won't have to pay Jean-Charles and, as long as he is under contract in Europe, he doesn't count against the cap.

With their second round pick the Spurs selected Deshaun Thomas, a scoring combo forward out of Ohio State that has virtually no shot at making the roster this season ... but you never know. If he makes it, it will likely be on a minimum deal or close to it.

A game to remember 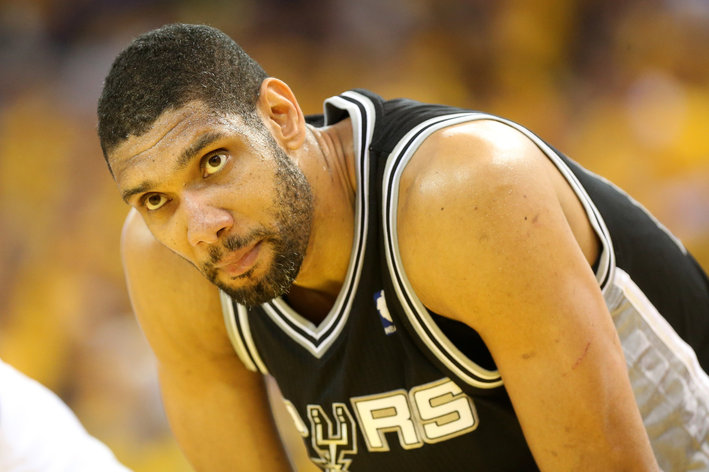 It was just one of the Big Three's 101 playoff victories together, but they're all memorable in their own way.

The Spurs have 10 players already under contract this season after Patty Mills and Boris Diaw opted in on their respective player options. That means the team has $41,666,028 in committed salary for next season. For details, visit the always helpful ShamSports.

The depth chart stands as follows:

The Spurs could have shed some salary by waiving Matt Bonner before the 29th, the day his partially guaranteed contract became fully guaranteed, but decided not to. They could still use the amnesty provision on Bonner but it would have made more sense to just waive him. The Spurs could also go for the nuclear option and amnesty Tony Parker, which would give them around $30 million on cap space, But that is definitely not going to happen.

The salary cap is expected to be set at $58.5 million dollars, which means the Spurs have some serious cap room to play with. But there are some restrictions as to when and how they can use it.

For an explanation on what a cap hold is, click here.

The Spurs have four free agents: Manu Ginobili, Tiago Splitter, Gary Neal and DeJuan Blair. No, I'm not counting Tracy McGrady. Manu and DeJuan are unrestricted free agents, while Tiago and Gary are restricted. As to what I think will happen with those guys, feel free to read the pieces I wrote on each man's free agency possibilities.

Now, Manu's cap hold of over $19 million swallows whatever cap room the Spurs have, so before doing anything else, they need to address the Manu situation. Splitter's cap hold is also significant, coming very close to $7,5 mllion. The cap holds for Blair and Neal are much more manageable, neither exceeding $2 million dollars.

How can the Spurs use the cap space?

There are three basic scenarios of how it will play out.

Scenario one: the Spurs re-sign Manu, Splitter and possibly Neal and use an exception to add someone else

If the cap is in fact set at $58.5 million, the Spurs would, if they renounce their free agents and exceptions, be under it by close to $17 million. But if they don't do that they would be considered to be over the cap and would still have their mid-level exception. Remember, the exceptions count against the cap unless they are renounced, and including them and the cap holds, the Spurs are technically over the cap.

Since you can go over the cap when signing your own free agents, the Spurs could sign Ginobili, Splitter and Neal and still add someone else. This strategy allows the Spurs to keep their core together while still adding someone that can contribute to a max salary of around $5 million with the MLE (Mid-Level Exception) without coming close to the tax. That should be enough for a back up wing, another big or both, if they split the exception.

This is just a guess as to how much it would take to sign these players. (I've only used unrestricted free agents that I think the Spurs would go after):

Players that could be likely had with half the MLE

Scenario two: the Spurs renounce all their free agents and exceptions

If the Spurs renounce all their free agents, they would drop down to $17 million under the cap and when you get that far down, the exceptions automatically go away. The Spurs could then add someone using all $17 million in cap room and have the room exception to add someone else to a max contract of $2,5 million once they are done.

If the Spurs are confident they can replace both Manu and Tiago using this method they could go for it but it would be risky, as Tiago would become an unrestricted free agent and they would lose Bird rights for both him and Manu. Unless there is a star out there that commits to signing, this seems like too extreme a move as they will likley be able to sign only one big free agent. Of course, the Spurs might decide that two or three younger, cheaper players would be a better fit for the post-Duncan future. I really don't see this happening, but I've been wrong before.

Scenario three: a mix of the previous two

The Spurs could re-sign one of Ginobili or Splitter, renounce the rest of the free agents and exceptions and have the rest of their cap space to sign someone else to a medium size deal. They would also have the room exception available.

The deadline to waive Matt Bonner has passed, as mentioned above.

The deadline to extend Splitter and Neal a qualifying offer is June 30th. If they haven't already, I'm sure the Spurs will today, at least to Splitter. They can withdraw that qualifying offer later, making him an unrestricted free agent.

Update:Jeff McDonald reports that the Spurs extended qualifying offers to both Neal and Splitter, making them restricted free agents. That means the Spurs can match any offer they get.

Teams can start negotiating with free agents on July 1st but can't sign the contracts until July 10th, the day the July moratorium ends.

Alright, now you have the info. Let the speculation begin!