Is being a fan worth the pain?

A lifelong Spurs fan wrestles with several hard questions in the aftermath of the Spurs' near-championship.

Share All sharing options for: Is being a fan worth the pain?

Since Tuesday night I've felt like I witnessed a brutal crime occur. I cannot stop replaying the almost rebound by Kawhi Leonard in my head. I can't stop imagining what it would've looked like to see Ray Allen's corner three clank off the rim. I picture a out of control towel-waving Patty Mills, a relieved Leonard, an ecstatic Tim Duncan. It's cruel, it won't stop and it will be there forever. The images of a fumbled lead and a Tim Duncan floor slap will be in my mind forever. And because of that I have been questioning, is any of this worth it?

My biggest issue with sports fandom has always been this...the pain. The agonizing pain of defeat is always so much stronger than the thrill of victory. The pain I felt after walking out of the AT&T Center following the 2006 loss to Dallas, the shock I felt after the .04 seconds shot, the anger after losing to Memphis and the confusion after OKC backdoor swept the Spurs last year are so real. Those feelings stick with you. I remember them so much better than I do the victories.

Over-invested fans like me are the main victims of this curse. Fan's who celebrate like crazy after victories yet are able to shrug off losses like they're no big deal probably don't make up the majority of Pounding the Rock's readership. They aren't the ones who grew up going to Spurs games; the ones who watch meaningless regular season games against the Washington Wizards; the ones who remember guys like Jason Hart or Devin Brown. These fans are able to do something that I can't right now, even at ripe old age of 23 years. They can separate their sports fanhood from their personal life. I envy them for that, I envy them for the fact they probably didn't stay up till four in the morning after Game Six watching No Country For Old Men. I envy the fact they don't let the Spurs losses wreck them.

Like I said, I haven't been able to stop replaying game six in my mind. It's like a bad dream. The cruelest part of it is, I tasted victory. We all did and the Spurs themselves did. When we were up five I began to jump in the air to the point that my knees were touching my chest. I felt for a few seconds what this championship would be like, how it would feel. I even posted on twitter "I can taste it." I promptly deleted it after the game ended. But, this championship would have thrown a chink in my theory. The thrill of this victory would have outweighed the pains of defeat. It would have been better. I was going to write a mammoth column after game six on why winning this championship was so important...for me (a fan), for the Spurs, and for basketball.

I'll give you the depressing Sparknotes version of what I would have said. For me it was important because it would've left me with a feeling of satisfaction in thinking about the Tim Duncan era. Sadly, I go too often to my most recent memories: a 2008 loss to LA in the WCF, Goran Dragic, Manu injuries, Memphis, the OKC collapse and now add to those -- blowing these Finals. I was 17 when the Spurs beat the Cavaliers. I remember the 03-07 championships well, but I've never gotten to experience the Spurs win it as an adult. I understand the game so much better now, I didn't watch for pick and rolls or backdoor cuts when the Spurs beat Detroit. Back then, I was just happy when the ball went in the basket and pissed when it didn't.

Why I thought the Spurs winning this championship was important for their legacy was because they had never had a Finals opponent that was truly memorable. Had the Spurs never made it back to The Finals (though they won four championships) I think they might have been forgotten. I think only Spurs, Mavericks and Suns fans would have remembered their greatness. The other reason is this, the Spurs have never won any of the truly epic series they have been in. If you ask the national media which Spurs series they remember the best they will say 04 against LA, 06 against Dallas, 2012 against OKC and now this Finals loss. I don't understand it at all. I don't understand why it happens. I guess I chalk it up to the fact the Spurs got bad bounces in those series and good bounces in the years they won it. I wanted one epic series to be my ebenezer with the Spurs.

What is so hard about this year is the fact that the Spurs seemed to be the better team. They were less erratic, executed better and until the last five quarters, seemed to want it more. What's funny about all this, is that it seems in this loss to the Heat in the finals, the Spurs will finally be remembered. Through not giving up and fighting back in this series, the nation has finally seen what we fans loved so much.

And now for the really hard part; why this championship would have been so good for basketball. A friend texted me last night that he felt like "everything evil about the NBA won." and I can see his point. Had the Miami Heat lost this finals to the San Antonio Spurs I think it changes the NBA. I think GM's and organizations see that "hey, maybe we shouldn't just try to form free agent squads around 2 or 3 superstars. Maybe we shouldn't get a new coach every 3 years." I think the Heat would have had no choice but to blow their team up, aka trading Chris Bosh had they failed two out of three years in the Finals. I think front offices would have tried to make their teams resemble the Spurs model of longevity, development and consistency rather than the Heat's model of clear cap space, sign a few superstars and surround them with veterans who want to latch on. But, the best player's team won, as they so often do in basketball. I asked another buddy before the series, "do you think the Spurs need to have the best player in the series to win it?" He said no, that they just needed a well rounded attack. That's what we got in games one, three and five. But, in games two, four, six and seven we saw a few players step up while the rest faded.

So now here we are, I am left unsatisfied and sad with game six burned in my mind forever to serve as the chief head in a totem pole of disappointment that's been carved out since 2007. The Spurs will not have won any of their truly epic series against marquee NBA players, save the 2003 win over LA and the victories over Steve Nash teams. (I'm not counting victories over Dirk and Chris Paul because those were not epic series). And evil sits on the throne of the NBA again (even though none of those involved fit that word as individuals), and quests to form free agent "big threes" will continue to ruin the integrity of the sport.

A Spurs postmortem that you want to read 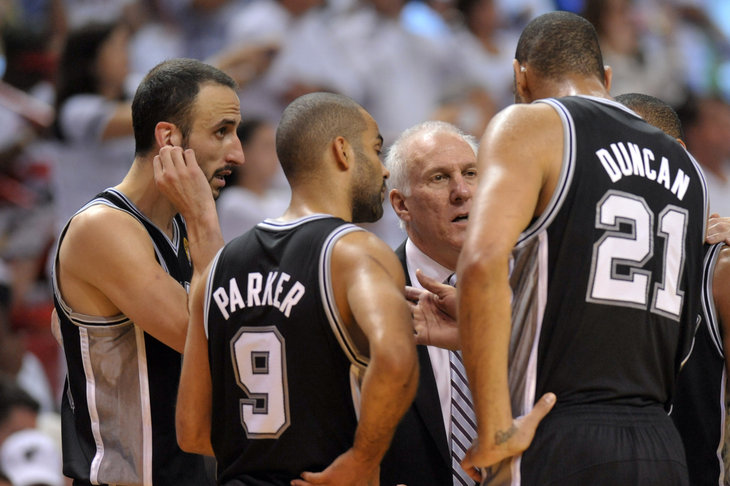 It'd have been easy to write thousands and thousands of words if they won. It's days like these that makes it a challenge. We'll get through this together.

I wanted this championship so bad I cannot describe it. I wanted the hat, shirt and DVD. I think, had they won, I wouldn't have cared what they did again. If they had turned into the Minnesota Timberwolves, fine! 2013 was ours. That's what I kept telling myself. And now, the game one buzzer beater, Danny Green's record, Gary Neal becoming one of the MonStars for a game, and Manu's fountain of youth flirtation in game five all seem like sick jokes on the way to despair. I wish they would have been swept. I hated seeing Tim slap the floor, I hate that Leonard doesn't have a ring, I hate that this was their chance.

So that brings me back full circle. Is any of this worth it? Is the hope and quest for your team's moment in the sun worth all the moments in the darkness that even the best teams (like the Spurs) put you through? I keep telling myself, if you're going to become less invested...here is your chance. Do it now. Before they fall into perpetual mediocrity. I hate the thought of the Spurs becoming one of those teams. The Wizards, the T-Wolves, the Blazers, please, God, no. Is it worth following a team who you know can't get it done? I remember thinking that the 2010 Spurs seemed so pointless. Should I put myself through the torture? I'll be honest, I did not watch game seven. I knew even a win wouldn't sustain me forever so I focused on something that would, and took my wife on a date. Sadly, without knowing the score I turned it on just in time to see Tim miss over Shane Battier. And even though game seven hurt, I was relieved I didn't watch. Like Stampler said, y'all are braver than me. So that's my question...should I not watch?

I went to the University of Texas, but am a two percenter when it comes to their sports. I go to games, but I never really get down when they lose and never get too hyped when they win. I watch Longhorn fans suffer breakdowns over losses and I see what I am when it comes to the Spurs. I see how I let losses rule me and wins dictate too much of my happiness. I need to work on that. I have to find perspective. I have to somehow watch the Spurs lose and understand their greatness even in defeat. I have to appreciate the way they fight even when they lose. Because right now I am depriving myself of so much of their beauty.

I love the Spurs because they have a superstar who would slap the floor in disgust over losing, not one who would bitch at his teammates and bolt to a better market in free agency.

Does the agony of defeat outweigh the thrill of victory? If victories just mean championships, yeah it does. But, if victories mean watching your wife come to love the Spurs because of the way Kawhi Leonard grabs a rebound. Or watching someone like Danny Green rise to the top after years of being inconsequential. Or watching a 16 year period of class and consistency. No, the defeat does not outweigh the victory. Have your corner three Ray Allen, have your trophy LeBron. Does it suck for Spurs fans? Yeah it sucks, I freaking wanted that hat, shirt and DVD. But, will I stop loving the Spurs? Not a chance. Will I become less invested? Parts of me need to, but only to become invested in a better way. I don't want to be invested only to see a banner hang from the rafters. I want to be invested because they're my team and if you are in it just for championships you miss out on 97 percent of the good in sports.

And that makes the pain worth it.