When is a "Great Game" of the NBA Finals not really great?

Introducing the "Skyfall Effect" - when the hype around something's excellence outdistances the quality of the thing itself.

Share All sharing options for: When is a "Great Game" of the NBA Finals not really great?

When we lost to OKC last year I could handle it. I was crushed, angry, frustrated ... but we were beaten by a trio of amazing talents playing out of their minds at a time when our trio of amazing talents couldn't pull it together. We were a great team, they were a great team, and they were greater when it counted. Greatness prevailed. I wasn't happy about it. But I could live with it.

Tonight was lousy, but I can live with that, too. What I can't live with is what will happen today, over the weekend, and next week.

To explain what I mean, I need to rant about movies for a second. Specifically, Bond movies, and specifically last year's blockbuster "Skyfall". I have my reasons, please hear me out.

You see, I am a Spurs fan. A "real" one. I watch regular season games against scrub teams that don't even start until after 10:00 EST. I go to see my boys whenever they play in DC, even though it means having to watch the Wizards too. I am also a "real" Bond fan, which is sort of the flipside - I actively avoided seeing the last few Pierce Brosnan ones because, seriously?

Anyhow, it was with a nearly unbearable cocktail of hope and fear that, a few years ago, I went to see "Casino Royale." This was the first installment of the Daniel Craig reboot, and I sat in the darkened theater awash with excitement and trepidation. A few hours later, as I stood up to leave, I was almost in tears. "Casino Royale" was flawed, muddled, inconclusive ... and right. They had gotten it right.

Somehow, against the odds, they had realized that the last generation of Bond flicks had missed a fundamental point. James Bond, the Connery Bond - the "real" Bond - wasn't special because he had fancy gadgets and looked good in a tux . He was special because he was cool, too cool to be sane, a borderline sociopath who really could end a man's life one moment and bed a beautiful stranger the next. We didn't need another pretty boy with a utility belt and a pocketful of lousy puns; we needed a guy who could barely suppress his giggles while ripping off razor-edged zingers at the man who was systematically shattering his testicles. We needed that, and we got it.

Then Quantum of Solace came out, and it was ... okay. Nobody was quite sure what to make of it. It was a bridge into darkness; we wouldn't know what to think until we got to the other side.

Then, last year, we got there. Skyfall.

Skyfall, at time of writing, has a 92% critic score on Rotten Tomatoes. Critics rave about its ambition, its freshness, its daring. Beyond the slickness of its SFX and the gorgeousness of its cinematography, Skyfall delivers uniformly magnificent performances from a host of incredible actors, most notably Bardem (it takes guts to invite comparison between your movie's villain and Anton Chigurh, but Bardem has the panache to carry it off). I Could. Not. Wait. To. See. It.

Skyfall is bold. Skyfall is beautiful. Skyfall is the stupidest, laziest, most pointless mess I have ever suffered through in my entire life.

And the worst thing about it is that I held onto hope right until the end. I thought: this is going somewhere. This is going to all come together. It has to. Redemption lies ahead, just wait and see. I waited. I saw nothing but more miserable, unforgivable stupidity.

If you know what I'm talking about, or if you don't care, feel free to skip the next bit. 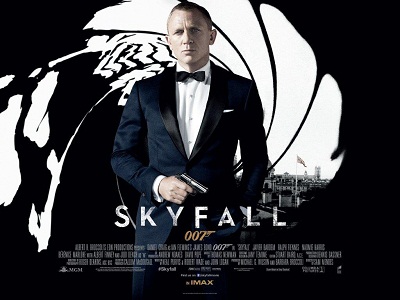 Okay, let's forget about all the patently stupid action-movie stuff, that's just par for the course at this point. It's fine that the fiery explosion in an underground tunnel just gave Bond some cosmetic soot smears, rather than rupturing his eardrums and sucking his lungs inside out. Whatever.

We can also forgive the ever-cringeworthy assumption that a bad guy who is Good With Computers can easily bend an entire nation's information infrastructure to his will.

Let's even be so generous as to absolve Skyfall of the absurd game of gambit roulette that is basically the entire Villainous Plot (the Big Baddie keeps a carefully timed train handy just in case his captors catch up with him in a very specific part of the sewers, but his big plan to assassinate Judi Dench is to lead a handful of stupidly dressed henchmen into a heavily guarded building and start firing wildly in her general direction with a pistol). This also means indulging whatever hack screenwriter watched "The Avengers" and thought "Ah! I too will have my tough-but-effeminate villain deliberately get captured and imprisoned in a big weird fishbowl-thing, specifically so that he can get close to the good guys whom he hates with a self-destructive passion that I will never quite manage to sell."

What the heck: let's even overlook the fact that the movie can't even make sense on its own terms. Does Bardem just want Dench dead? Does he then change his mind and decide he has to kill her himself? And does he then change his mind again, and just send in his goons anyway? Why did he need to let himself be captured and brought to England if he's got an army of thugs with a military-grade arsenal that can move freely anywhere in the UK? And why doesn't Fiennes ever send the cavalry? Did we just forget about that whole part of the plot? Who cares!

Skyfall's greatest sin, the massive, unforgiveable failure that brings the whole thing crashing down, is this: NONE OF IT MATTERS. The first two movies got a nice little arc going: in CR we catch a glimpse of a shadowy organization, the spiritual successor to SPECTRE, that is plotting nefarious doings. Then, in QoS, we uncover more and more of the plot, learn more about Greene Planet, see the global conspiracy taking shape. In Skyfall? Some crazy former agent wants to kill M ... and he does. That's it. End of story. No trying to start a nuclear war, no destabilizing the world's currency, no space-lasers. Not even the continuation of a genuinely interesting conspiracy connecting a shadowy ring of financiers with global terrorism. Skyfall wasn't a Bond movie, it was a story of how the destructive relationship between a powerful woman and her Oedipal protégé was briefly influenced by some guy named James. Bond might as well have just kept his bartending job and let them get on with it.

Skyfall sucked. But you know what? I could have lived with it sucking. I love Bond, and what I saw in "Casino Royale" told me that the flame of greatness still burns. If the critics had panned it and the box office had abandoned it I would have been okay. There's always another one. Bond will return.

I wanted Skyfall to be great, but it wasn't. Please don't tell me it was - when you do that, you cheapen the real greatness that went before. Even worse, if you tell people that lousiness is great often enough, eventually they won't be able to tell the difference. It's the Skyfall Effect, and it's sickening.

Last night, I should say. It's gone from late to early here in DC, but I needed to get this out. I won't dare open my browser in a few hours, because I can't stand to see the headlines. Not just because the Spurs lost, but because of how that loss is going to be written into history.

That's the real headline. That's what happened tonight. This series has been a roller coaster, but at the end of the day this Game Seven Spectacular was a dud. There was no greatness on display here, no dazzling show of elite basketball skills; a watching world was treated to an exhibition of profound mediocrity.

What were the real lessons of the night? Well, Leonard might turn out to be something really special. Ginobili might have finally reached the end of his Hall of Fame career. And maybe, just maybe, you might want to guard Shane Battier on the perimeter.

There was no greatness this evening. That's okay. Disappointing and disheartening, but okay. Miami is a very good team, and they've earned another year of ludicrously overblown hype. If role players like Allen and Battier are okay with all the glory redounding to the LeBron James media machine, that's up to them. If you want to pretend that he's an all-time-great anything, that's fine. But - and this is the important point, the reason I sacrificed an hour of badly needed sleep ranting about a movie - DO NOT ask me to pretend with you.

DO NOT try to Skyfall what happened. Don't try to talk to me about a great game. I'm a Spurs fan, and I know greatness when I see it. I wanted it today, with every fiber of my being, but it didn't happen. I can accept that. But don't cheapen what I've already got. Every other team in the country has fans who can cheer for flashy dunks or debate locker room drama or thrill to the bouncing of ping pong balls. I'm a Spurs fan, and what I have is a love of great basketball. That love ended the season unrequited.

Tonight was close. It was tight. It was tough. It was gritty. It was very, very important. And it was lousy.

But man, did you see Leonard? Next year is gonna be great!