So the Spurs lost a game they had in hand. So one more free throw here, one more rebound there, would have iced it. So there were questionable decisions by players, coaches and refs. So San Antonio is on the road for Game 7. So what? There's one more game to play. The Spurs are not giving up, and I don't plan to either.

There are so many things I could say at this point, but I thought I'd yield the floor to you folks who have written so powerfully and eloquently in the comments after Tuesday night's Game 6 loss. You've done a much better job of handling this situation than I could have.

Manu does, what Manu does. For years we have loved him for that and now he's the enemy? I think not! Question is: Who do you replace him with? Gary Neal? With the Heat defense playing even tighter, would a shorter player make sense? You gotta go with the 5 you think match up and can produce. Should Pop do what he thinks the fans want or trust his proven Soldiers? Did Parker catch fire in the last 2 minutes? Did Duncan? How about OT? Sometimes, you just have to tip the hat to the other guys and say, ‘get you next time'. If I'm the coach, I lose on my terms, with my guys, my Big 3, my vets! I wouldn't second guess in the middle of chaos. You get low and push forward...you keep Pounding The Rock!! Has Manu looked like Manu of old? Nope, but I would rather lose with him than some other bench guy. This new found hate for Pop decisions and Manu is sickening. I get the frustration the game can give you, but Spurs fans are better than this non-stop whining. This organizations is blessed from top to bottom.

All of a sudden, we are some spoiled divas? Hell no, we are not. Spurs and their fans should take losses like a champ, because we have been dishing out losses to others without prejudice! The thing to remember is that there is still one game on the schedule. With one game left in the season, I feel comfortable knowing that my team is the Spurs. Pounding the Rock is what they do. Go Spurs!

Stop saying bad things about Kawhi. He has been utterly amazing this entire season, this entire Playoffs, this entire Finals. Offensively, and defensively. He has performed greater than most people could have imagined, and sad to say, you seem to have missed all that. He’s also still just a kid. And human. And he went 1/2 from the line there. That happens about 50% of the time a decent FT shooter goes to the line. They make both once, they make 1/2 the next time, that’s 75%. Happens constantly.

You want to talk about bad missed FT’s, you’d have an argument in Manu. No idea what’s going on with him at the line. He’s been there so many times, no excuse. But Kawhi missing one free throw? After everything he’s given us? Please just be quiet.

No. No excuses. We didn't rebound when we should've, missed timely FTs, and they hit some incredible shots. We had the game. We were in control. We should've won, but didn't. On to Game 7.

Yes, there were some tough calls. Bad ones, even.

Yes, we missed some FTs. Part of the game.

Champions are stronger than any circumstance that comes their way. They're going to come back harder. And sharper. And even better.

We took a backdoor sweep last year and bounced back from it. We got beat by the Grizzlies two years ago and repaid them with interest.

These men are basketball legends, forged in fire - and if age and injury and playoff heartbreak couldn't stop them from returning to the Finals, if The Greatest Team EVAR needed a home win just to force a game seven, I'll be damned to think that one tough loss is going to stop them now.

You can wallow in the loss if you choose; just know that your team will not. 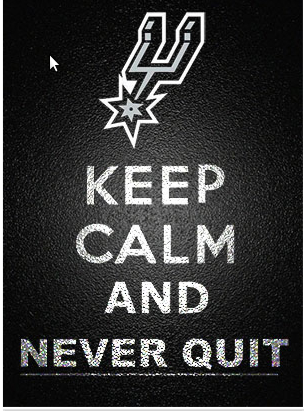 I'm over this one. We WILL win game 7. There are too many champion hearts on our side. They saw it slip away, and they won't let it happen again. Expect great things from our boys for the last 48. Manu and Tony will bounce back, and Timmy will not be denied his 5th. Bank it. Get up! No sulking from any of you. This was a tough one to swallow, but get it down and never think of it again. You think Tim is down? I'm sure he was, but now he is just pissed and determined. Those boys don't lose game 7's. We still have the best coach and the greatest big 3 to ever run the court. The rock will be pounded. The boys will be victorious. Bring the mojo, don't stop believing, and count on the boys.

IDK if anyone will see this but I am really needing some fan support. I watch the Spurs all by my lonesome here in Dallas cause none of my friends here are interested (crazy I know right?!) but last night my heart was broken. We were like 40 odd seconds away from putting this thing away and we couldn't do it. My heart tells me that our boys have the pure definition of "A heart of a Champion" and can put it away in Game 7 but my brain is scared and saying we can't win in Miami. I didn't get no sleep last night!! I can't believe how invested I have become in a sports team. I can honestly say I love these guys and I'll shed a year whether we win or lose and be thankful I got to see this historic playoff run.

Finally, while I prefer to define myself and this website by the support we show for the Spurs and not a dislike for anything, I thought the following comment was pretty well put together. And if you're tempted to judge this member, this website or Spurs fans in general as haters, please finish the entire comment before doing so.

Man, I hate the Heat. I hate their extra-large bandwagon and their 24/7 ESPN coverage. I hate that 3/4 of their fans don't show up until the first TV timeout. I hate Justin Bieber. I hate Ray Allen. I've hated him since he played for the Sonics, and then with the Celtics, and now that he's a blatant title-chaser and his face looks like he's permanently smelling someone's shit, I hate him even more. I hate how Wade's knee is on the verge of amputation in 18 playoff games, then magically reattaches itself with Hulk strength. I hate how excited announcers get when LeBron blindside blocks someone who has no idea he's even there. I hate the Miami P.A. guy. I hate Chris Andersen and his stupid mohawk. I hate how Mario Chalmers thinks he's a top-10 all-time point guard. I hate how the Heat can take every other game off and still make it to the Finals because the East sucks. I hate how they get to play 16 games against Charlotte, Cleveland, Orlando, and Washington and people still make a big deal about them getting 66 wins. I hate how they got the freaking BUCKS in the first round. I hate LeBron's headband. I hate LeBron's lack of headband. I hate Wade's whining. I hate Dove Men's Care products. I hate how Miami bought their 2012 championship. I hate how Nike already made shoes calling LeBron a "two-time champion." I hate how Erik Spoelstra just stands around with a blank face like he has no idea what's going on half the time, and then somehow the team goes on a huge run anyway. I hate Pat Riley's slicked-back mobster hair. I hate that LeBron actually has an outside shot now. I hate how Mike Miller walks like he has a peg-leg, then runs and jumps like nothing's the matter when the ball is in play. I hate that the Heat front office got rid of Eddy Curry, so now there's nobody on the roster than I don't hate. I hate that Miami makes me hate them, because I don't particularly like hating people.

I'll have more of my own words for you some time before Game 7 tomorrow.

Add your thoughts, or your own favorite comments of others', below.