The Spurs closed out the last of their three straight Finals home games in style, taking Game 5, 114-104. Here are the keys to that victory, and a look at what Manu Ginobili's rhythm had to do with it.

Share All sharing options for: Finals Game 5 Rehash: Staying Ahead

In each of the Finals' first four games, the Spurs have jumped out to the early lead, only to have the Heat reel them back in. In Game 1, the Spurs led by 7, but at the end of the first quarter Miami was up 2. Game 2 saw the Spurs up five early only to be tied after twelve minutes. Game 3, it was Spurs by 7 with 7 minutes to play in the opening frame, but the Heat tied it before the Spurs ended the first up 4. And in Game 4, the biggest turnaround, San Antonio led by 10 points just 5 minutes in, but Miami pulled a 13 point turnaround in the last 7 minutes to lead by 3 going into the second.

In Game 5 there was no such early separation from the Spurs. It was tight all through the early minutes until late in the first when, after being tied at 17, San Antonio went on a 15-2 run in less than four and a half minutes. There are a lot of ways you can slice up Sunday night's win over Miami, but the bottom line is that the 13 point lead the Spurs carried into the second quarter amounted to the difference in the game.

The same thing happened with all of the Spurs' runs for the rest of the game: the Heat matched them. The thirteen point lead the Spurs had in the second and the twelve point lead they took into the third, were both chipped away by Miami. Sure, every time Miami got close, San Antonio put another run together, but the fact remains that the Heat never let them really run away and hide.

It made for fun game to watch, but also an intense contest that was never really in the bag, which brings us back to that early lead. The Spurs were up by 13 at the end of the first quarter and they made that lead stand up as they won by 10. Now the team that's never had a series deficit in all five Finals it's been in has a 3-2 lead heading back to Miami -- just one more advantage they want to keep.

I guess they're similar in the fact that neither one of them has any moves. They just shoot it.

-Popovich about how Danny Green is like Bruce Bowen.

Timmeh takes Bosh into the way-back machine known as the spin cycle, and makes like 2005 as he separates from Bosh for two of his 17 Game 5 points.

Be sure to read Fred Silva's recap of Sunday night's game if you haven't already.

Manu is, we've heard time and time again, a rhythm player. He's slow to start the season, and he's slow to get back to his normal self when coming back form injury. He needs to be in the flow of the game, he's told us himself, before he can have the kind of impact we're used to seeing from him. And through four games of the Finals, there just wasn't any rhythm, flow, groove or zone that Ginobili could have been in; no positive ones, anyway.

After Game 4, Pop was asked about what needed to be done to get Manu going and he said that if he knew he'd have done it already. Well, it sure looked like Pop knew what he needed to do, because in a coaching move that required significant intestinal fortitude, Manu was moved back to the starting unit, replacing Tiago Splitter, and difference was felt immediately. The Spurs' first six possessions ended with points scored by, or assists handed out by, the balding Argentine.

And it didn't stop there, as Manu played exceptionally well all game long, breaking out a bevy of moves many pundits must have thought had been moth-balled permanently. His final line is a thing to behold: 8-14 from the field, 7-8 from the line, 2 rebounds, 10 assists, 1 steal (and a game high +19) and 24 points.

Everyone talks about how the playoffs are different than regular season, and Manu coming off the bench is an answer to an 82 game question of how to keep the bench scoring at a high rate. After Erik Spoelstra shook up his rotation by starting Mike Miller in Game 4, Pop took the opportunity to do something he hadn't done since last year's playoffs, and in starting Ginobili, the Spurs' shift seemed to trump the Heat's.

Now the venue and the onus shifts to Miami as the Finals are now in elimination mode. And the question of the hour becomes: can we expect more of these performances from Manu now that he's found his rhythm?

I'm currently set to make 8 billion dollars off of the "Danny Green will be the Finals MVP" bet I made in November. @HPbasketball

Can anyone tell me what's going on in this picture? 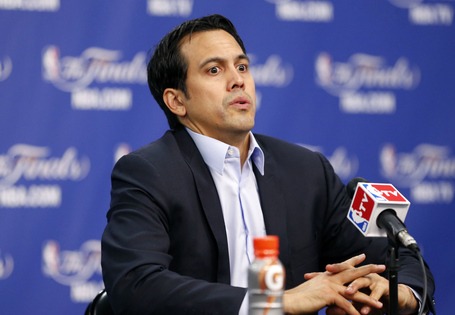