The San Antonio Spurs defeated the Miami Heat in Game 5 of the NBA Finals and are just one victory away from winning it all.

Game 5 ended up following the crazy trend. The team that lost the game before was not to be denied. The San Antonio Spurs defeated the Miami Heat convincingly, 114 to 104. If you only watched games 1, 3 and 5, I'm not sure if you'd believe that this series wasn't a sweep. However, if you only caught game 2 and 4, you probably would believe that the Spurs were doomed. The wins have been as convincing as the losses have.

The Spurs began the game well, jumping out to the early 32-19 lead. More specifically, Manu Ginobili began the game well. The much maligned Ginobili treated fans with a vintage performance. He helped the Spurs get off to a great start. Manu scored a bucket, hit two free throws and assisted on the Spurs other first three baskets. Manu had a hand in the Spurs' first ten points and it didn't stop there.

This game felt as if the Spurs were moments from pulling away, but the Heat were just too good to allow that to happen. Most teams would have succumbed to the Spurs' pressure, but this Heat team managed to endure the many great performances. Even though they put up a great fight, the Heat eventually wilted to the Spurs.

It's a testament to the Heat that they were in this game. That's just how good Miami is at basketball. The Spurs shot 60% from the field and 41% from distance tonight yet never were able to feel comfortable. The Big Three for Miami all played well, scoring 66 points while connecting on 25 of their 55 shots. However, it wasn't enough to beat the Spurs on this day. San Antonio was just too good. The Spurs led for most of the game and in the second half, they were able to pull away from the Heat. 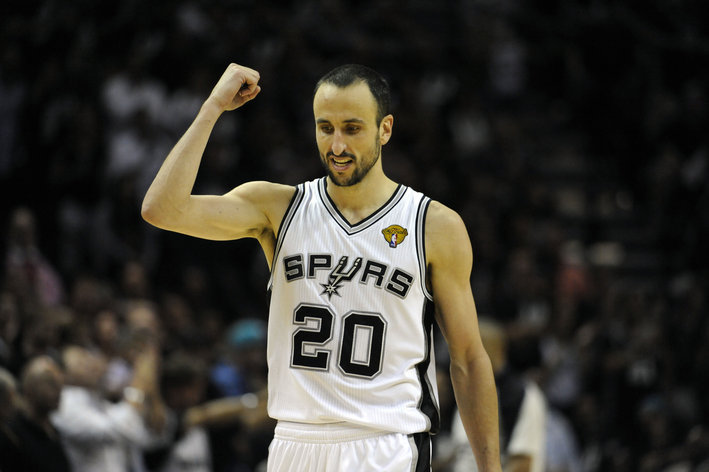 The Spurs closed out the last of their three straight Finals home games in style, taking Game 5, 114-104. Here are the keys to that victory, and a look at what Manu Ginobili's rhythm had to do with it.

Manu finished with 24 points and 10 assists on an efficient 8 of 14 shooting. The shots that rimmed out all series finally found the bottom of the net. Manu is a luxury for the Spurs and when he plays well, San Antonio is pretty much unbeatable. The Heat had little recourse as the Argentine lit them up. After the game, Manu made an interesting comment. "The ball-handler doesn't have that many opportunities because of the way they guard the pick and roll. Playing with Tony, more minutes, really helped me to catch the defense off-guard and I tried to attack the basket a little more." Playing with Tony and Tim allowed Manu to find his rhythm. Funny enough, Spoelstra's decision to start Mike Miller may have helped the Spurs more than the Heat.

The Spurs had 18 of them, which is normally a recipe for disaster. The Heat are just so athletic and long that they seem to force the Spurs into making them. It's great to see that the Spurs are capable of winning even when turning it over at a high rate. If the Spurs can keep this number under ten in Miami, they'll have a great chance at winning this thing.

How good are these guys? The Spurs played a great game yet were unable to pull away greatly because Lebron and Dwyane were just so good. Why is Dwyane all of the sudden healthy? It's unfair. He only had two 20+ games the entire playoffs and then rattled two off in a row. His resurgence is unbelievable. The Big Two scored 50 points, yet it wasn't enough to get the Heat a win.

The old man finished with 17 points and 12 rebounds making 7 of his 10 shots. For most of the night, with the Spurs going small, he was the only rim protector in the game and he did a phenomenal job. Even though the Spurs played a great game, I feel like if they wanted to improve they should give Tim the rock more often. Miami is attempting to guard Tim with Chris Bosh. Bosh is too small to be a deterrent. I think the Spurs could manufacture a lot of easy points if they forced the ball into Tim on the block more often.

Tony played a fantastic game. He led the Spurs with 26 points on just 14 shots. He only was credited with five assists and that's understating his effectiveness. Tony created many open looks for his teammates; they were just more than one pass away from a jump shot. His hamstring seems to be fine. He did limp to the podium tonight, but he played as if it wasn't bothering him.

Danny is now 25 of 38 from behind the 3-point line in the finals. He's hitting everything! He broke the record for most 3-pointers made in the finals and it's only Game 5. That's nuts. His confidence is sky high. He seems shocked when the ball doesn't go in. He punishes the Heat for attempting to keep Tony and Tim from getting good looks. I don't know what Erik Spoelstra is going to do. If he decides to keep a defender on top of Danny, that means the lane is going to be wide open for Tony and Manu. Danny is making this a tough series for Erik.

Boris played 27 important minutes. The Spurs desperately needed someone to take the minutes that Duncan is unable to play. In Game 4, Diaw played great and Popovich rewarded him with more playing time in Game 5. He's just a very smart player. He defended Lebron with superior anticipation, beating him to the spot and forcing Lebron to settle for contested jumpers. Just imagine what this guy could do if he were in shape! (I kid, I kid.)

Kawhi made six of his eight shots for a very efficient 16 points. His defense on Lebron James was superb and he once again held Lebron to a quiet game. Well, it was as quiet as a 25 point, 8 assist game could be. It's probably a good thing that Lebron had a decent game because for some reason he plays much better after a terrible outing. Hopefully he's content with his performance.

The Spurs are just one win away from winning it all, and they'll have two opportunities at it. While both games will be in Miami, one has to feel good about the Spurs' chances. If they can replicate the game they played tonight, it'd be difficult for Miami to have a chance.